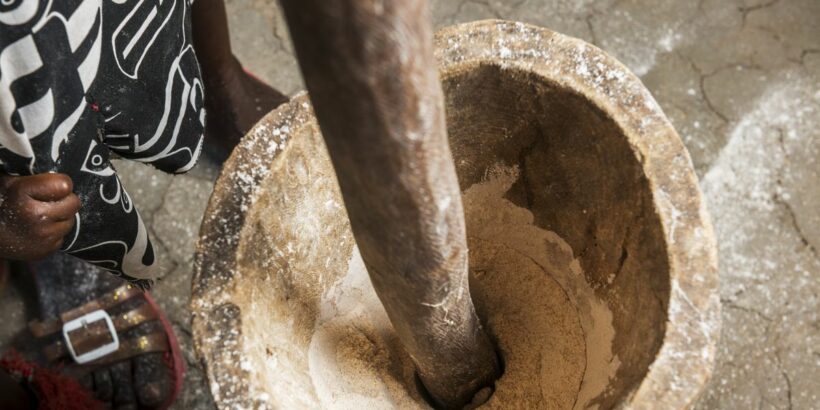 A young boy accidentally amputated part of his penis with a pestle and mortar while crushing vegetables.

The nine-year-old was rushed to hospital in Gabon after reportedly clipping the tip of his penis as he smashed the stone tools between his legs.

He was taken straight into surgery by doctors to determine the extent of his injuries after he arrived with his crotch in a soaked bandage.

They discovered that the tip of his penis was partially detached and his urethra, the tube which passes urine, was gruesomely severed.

The urethra was reconnected using a catheter and his penis was then sewn back on while the boy was under local anaesthetic.

He thankfully made a full-recovery and was found to be able to resume normal function at a check up a year later.

The terrifying tale was published by doctors at Libreville Central Hospital.

The young lad was reportedly helping his mum prepare a meal at their home outside of Libreville, the country's capital, when the injury occurred.

It took three hours for him to get to the hospital and doctors didn't disclose whether he arrived on his own or with parents.

After the operation, which was carried out at a hospital in Gabon, the boy was kept in hospital to be monitored and have the wound dressed.

He reportedly suffered a flare up four days after the surgery which led to the flesh around the injury to reach temperatures of 102.2F (39C).

Luckily the infection subsided after treatment and he was released from hospital 25 days later.

Writing in the report, doctors said: "Injuries to the penis in children are not common and their management can be tricky. These are rare but often serious emergencies.

'"They are largely caused by accidents in the home, sports and circumcision.

"The management of serious forms and their complications — amputations, fistulas — resulting from replantation or urethroplasty remains a challenge."