Lady Floella goes back to her roots in Chelsea tribute to Windrush generation… and if you look through the window, you’ll see that she’s remembered Play School too

It is an epochal image that symbolises the arrival in Britain of a generation of immigrants from the West Indies.

Now the moment the Empire Windrush sailed into Tilbury Docks on June 22, 1948 – carrying hundreds of Caribbeans destined to help the UK get back on its feet after the war – has been recreated by former TV presenter Floella Benjamin in a spectacular display at the Chelsea Flower Show.

Baroness Benjamin, who arrived in Britain from Trinidad in 1960 at the age of 11 and was made a life peer in 2010, came up with the idea two years ago and has worked on the project with the Windrush Foundation and Birmingham City Council’s gardening team.

The recent Windrush scandal – which engulfed the Government after it was revealed hundreds of Windrush-era immigrants were being treated as if they were in Britain illegally – has added poignancy to the display. 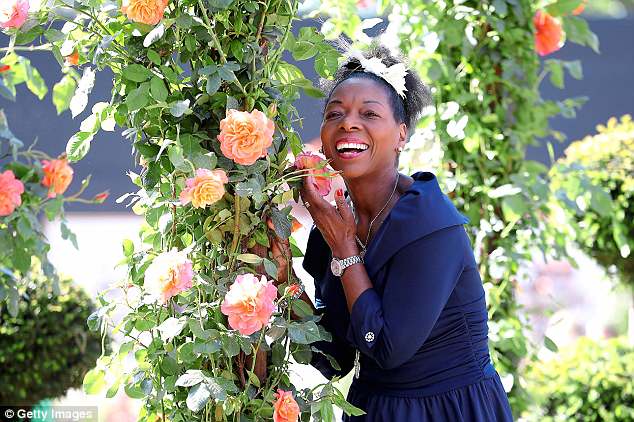 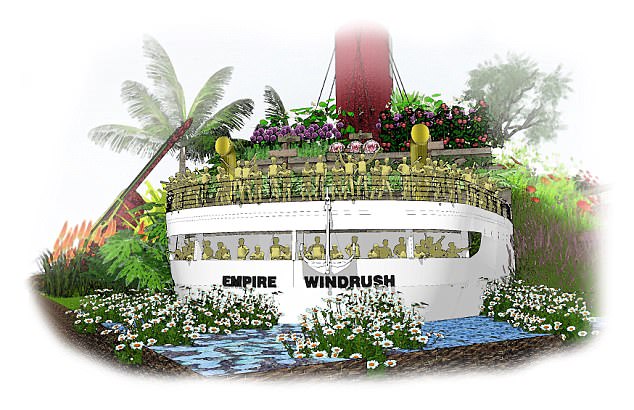 Baroness Benjamin, who arrived in Britain from Trinidad in 1960 at the age of 11, came up with the idea two years ago but the recent Windrush scandal has added poignancy to the display

Speaking before tomorrow’s unveiling of her first garden at Chelsea, Lady Benjamin called for a national Windrush Day on June 22 every year. ‘I think a special day would be important for schools so that children know why Caribbean people came to live here and what the Windrush generation have done for this country,’ she said.

The keen gardener said the display was ‘a celebration of the Windrush generation and a way to champion diversity. It’s also a way of thanking those who came here and helped make Britain strong by working on the railways or as nurses and doctors in the NHS.’ A model of the funnelled Windrush is the centrepiece of the £40,000, 30ft x 30ft floral display in the Grand Pavilion at the show, which opens to the public on Tuesday.

Life in the Caribbean, the journey and the new life in Britain are depicted in the design, which features 3-D models of passengers playing dominoes and singing while crowded together on deck.

A model train, bus, a nurse’s hat, keyboard letters and road signs represent jobs taken by the pioneers after settling here. The garden also features a reminder of Lady Benjamin’s past presenting Play School with the show’s famous square, round and arched windows hidden within a West Indian chapel house.

Birmingham City Council’s Darren Share, who worked on the garden, said: ‘It’s bold and bright, with gold, yellow and orange provided by zinnias, celosias, marigolds for the Caribbean and antirrhinums, foxgloves, hydrangeas and gerberas for the British reds, whites and blues.’

It will be recreated next month in Birmingham’s Handsworth Park. 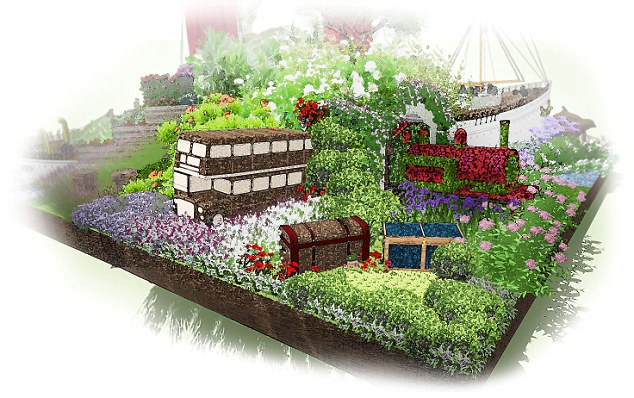 Speaking before tomorrow’s unveiling of her first garden at Chelsea, Lady Benjamin called for a national Windrush Day on June 22 every year