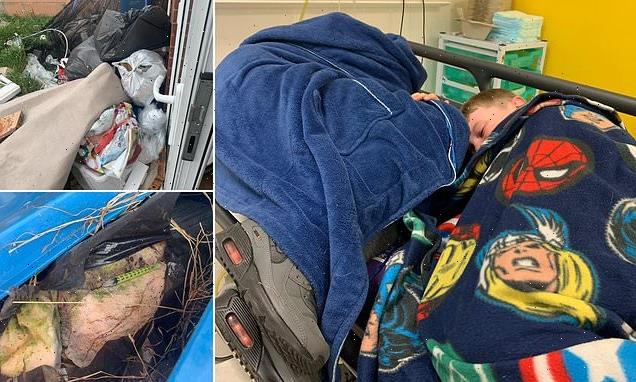 Mother, 30, forced to live in property filled with rubbish, needles, a broken boiler and ‘carbon monoxide leak which hospitalised her children’ is SUED by the landlord over unpaid rent

A mother who claims her children were left needing hospital treatment following a suspected carbon monoxide leak is being sued by her landlord over unpaid rent.

Shantelle Williams said the house in Kirkby, Liverpool, had mounds of rubbish, including hypodermic needles, dumped in the garden, the doors and windows were broken and the boiler did not work.

The support worker also claimed one of her young boys fell after leaning against loose spindles in the staircase, and says in recent weeks a faulty electrical circuit board caught fire in the early hours of the morning.

She said her sons, Kai, 10, and Tyler, five, were taken to hospital after complaining of headaches, and were found to have high levels of carbon monoxide in their systems.

After more than a year of problems, the house was inspected by Environmental Health officers from Knowsley Council, who identified a raft of hazards and a letter was sent to landlord John Potter, trading as J&D services, in October, warning him to make immediate improvements.

However J&D Services then launched legal action over alleged rent arrears, while Ms Williams decided to bring a counter claim over failures to keep the property fit for human habitation.

J&D denies failing to maintain the property and claims repairs were hampered by Ms Williams not allowing workmen access.

Ms Williams says she was in regular contact with J&D Estate Agents and spent in the region of £10,000 of her own money making the house habitable. 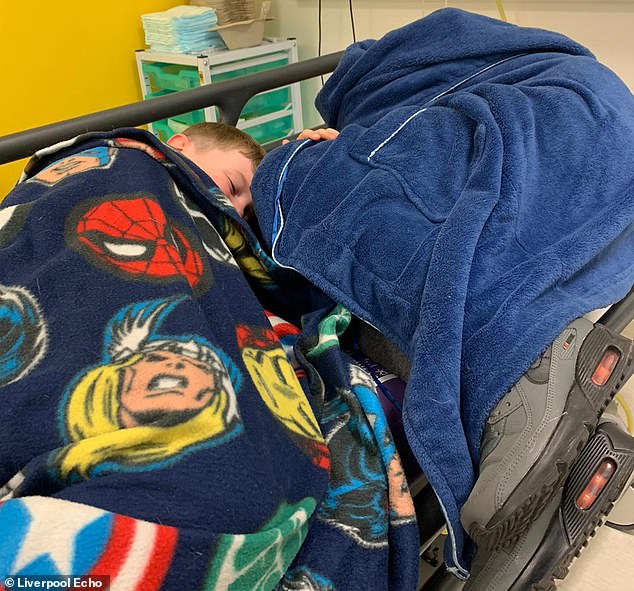 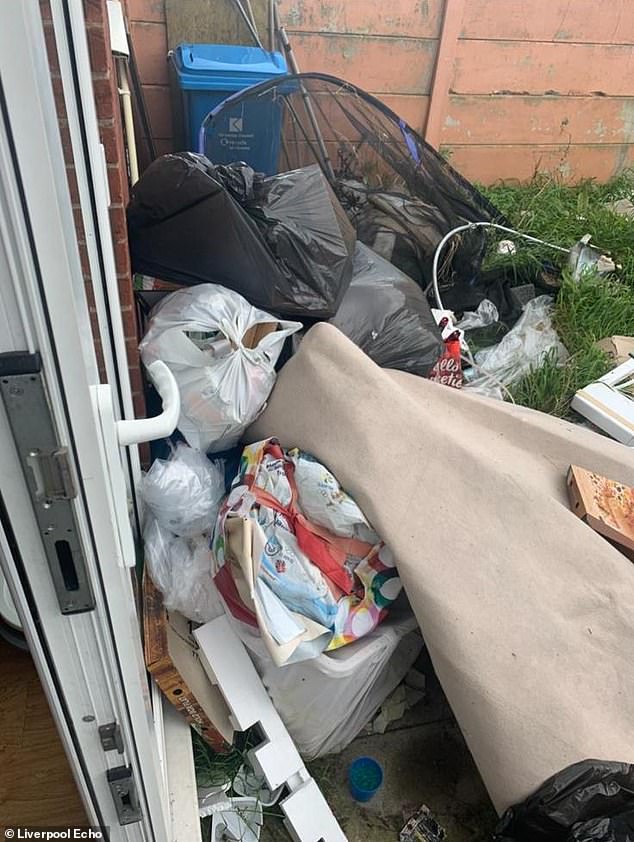 Ms Williams said mounds of rubbish were dumped in the front and back garden at the property before she moved in, but landlords J&D Services claimed it had been ‘thrown over the fence from a neighbouring property’

According to Knowsley Council’s Environmental Health report, inspectors identified eight specific areas of hazard including damp and mould growth, excess cold due to the broken boiler, electrical hazards and risk of intruders due to the broken front door.

Speaking of the suspected carbon monoxide leak, 30-year-old Ms Williams said she only realised there was a problem when a family member came round and complained she, like Ms Williams’ two sons, had a ‘really bad headache’.

Ms Williams told the Liverpool Echo:  ‘I started to panic and I rang British Gas. They came out and had to turn everything off. They told me it’s better to leave the property and I took the boys to Ormskirk Hospital.

‘The doctors said they had high levels of carbon monoxide in their systems but they were ok in the end.’

Ms Williams said an engineer visited the property and in a gas safety warning notice said there was a ‘possible’ smell coming from the boiler and that the boiler flue needed sealing.

She added: ‘I was quite desperate for a house. I had left my partner and this was up for rent.

‘When I went to view it, it was in a bad way. But the estate agent said “don’t worry, all the repairs will be done by the time you move in”.

‘Two weeks later I signed the contract, but not one repair had been done.

‘The front door did not shut properly, it was jammed shut, and it was the same with most of the windows in the house.

‘In the kitchen they had a piece of washing up line holding the window shut and tied round the taps in the sink.’ 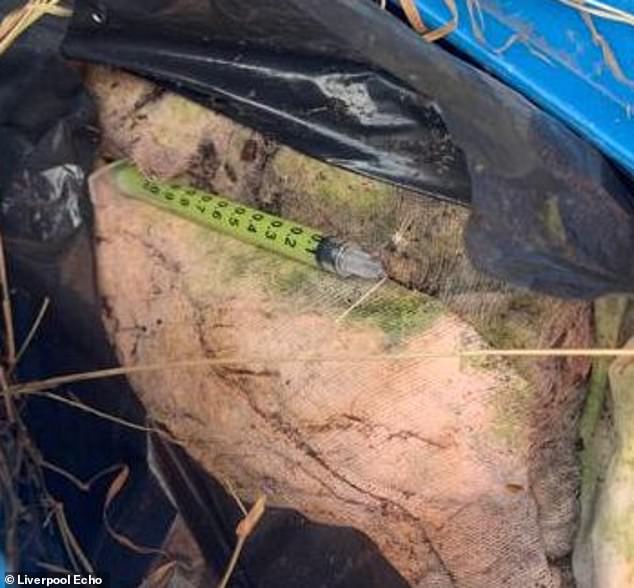 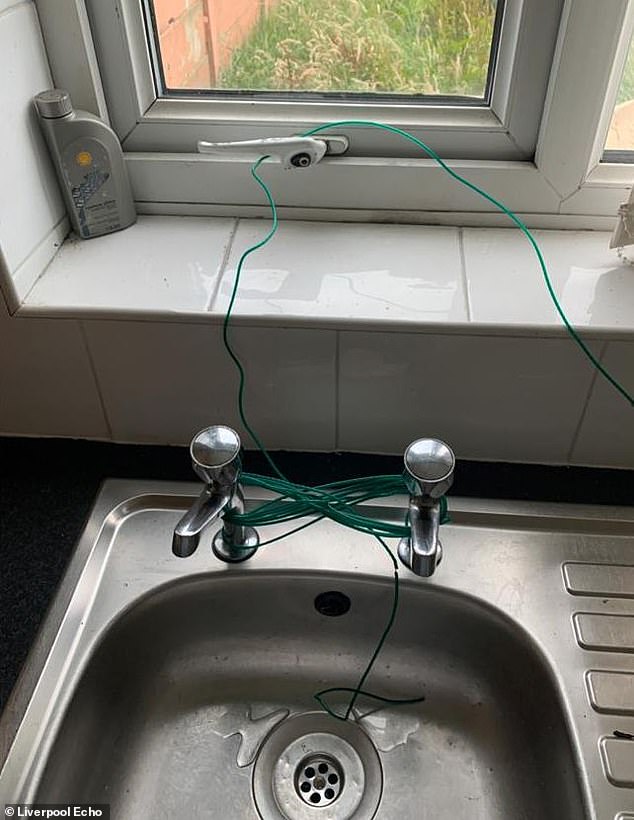 Despite the problems with the property, Ms Williams claimed she was not offered a discount.

When she eventually moved in, she said mounds of rubbish were present in both the front and back gardens, including needles strewn in the grass.

J&D claimed the rubbish was not there when the house was let and had been ‘thrown over the fence from a neighbouring property’ but said they had arranged for it to be cleared.

Ms Williams said she sent an email to J&D on July 6, 2020, in which she pointed out one of the bedroom windows was about to fall out, and that another did not open and presented a fire risk.

She said she could not move into the property ‘because the house is not safe’.

Other emails, sent later in the month, said: ‘I have been speaking to Shelter and Citizen’s Advice and they have given me a lot of advice.

‘You had me sign a contract when the house was not in a livable condition. The boiler was not working, there is still no water coming from the bathroom tap and the shower does not work so I am still not able to move in.’

When approached by the Liverpool Echo, a representative of J&D Services claimed it had complied with its legal obligations and denied the house was not fit for habitation.

The firm said it could not go into further detail due to the ongoing legal case.

Ms Williams said: ‘It’s affected me really badly financially and it has also badly affected my mental health, especially when they were denying everything.

‘It has been horrible, the state of the house has been disgraceful.’

Ms Williams said she has been relocated by Knowsley Council, despite there being some weeks left on her tenancy.

The legal case is ongoing.