Second lockdown sounds death knell for pubs: Landlords warn return of nationwide restrictions will shut them for good – unless government stumps up cash to save them

Pub landlords have warned that a second lockdown could see pubs close for good, unless the Government provides a support package, as fears of a second coronavirus wave increase.

Campaign for Real Ale, a voluntary organisation which promotes British pubs, has warned that a second national coronavirus lockdown could have a ‘terrifying impact’ on pubs across the UK.

The national chairman Nik Antona has urged the Government to introduce a support package for pubs to reintroduce the full furlough scheme amid fears of a second coronavirus wave. 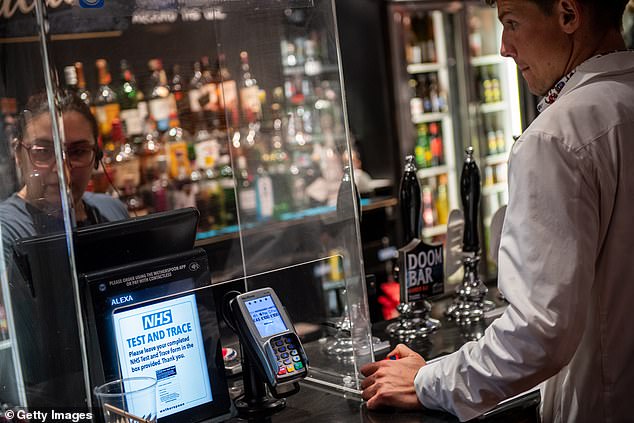 Campaign for Real Ale, which promotes pubs across Britain, has warned that a second national coronavirus lockdown could see pubs closing for good across the UK. Pictured, The Montagu Pyke in London on July 4

Nik Antona added: ‘The prospect of a second lockdown will be a terrifying impact on publicans who have invested money and time making their premises COVID secure and who are still struggling to return to growth two month after reopening.

‘If another lockdown is announced, the Government must immediately introduce a new, comprehensive support package for pubs that includes extending the business rates holiday for another year, reintroducing the full furlough scheme, and announcing new hospitality support grants.

‘This will be the only way to avoid mass pub closures and job losses.

‘The vast majority of publicans and pub-goers across the country are doing the right thing. They are acting responsibly and willing to do whatever is necessary to provide a safe, Covid-secure place for people to enjoy the wellbeing benefits of having a pint with friends and family.’

It comes soon after some supermarkets and food retailers have already put contingency plans in place if the testing system buckles.

Brakes, a food wholesaler, who have been operating throughout the pandemic, said:  ‘We’ve got very strong contingency plans in place which include temperature checks before being allowed on site. 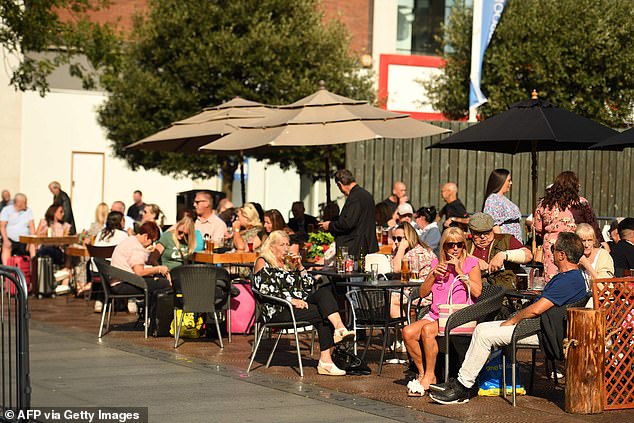 Some supermarkets and food retailers have already put contingency plans in place if the testing system buckles. Above, people enjoy a drink in Liverpool on September 18

‘Only essential people on site and stringent policies once people are there, which has meant that so far we have had very few people showing COVID-like symptoms.’

The Co-op group said that funeral care staff are on the key worker list so can get priority testing, but their food workers are not.

A spokesman said: ‘We’ve built a model where we know that we have access to variable colleague resources at fairly short notice, so we have some resilience on that.

‘Clearly we all hope that the testing capability will continue to strengthen and improve but we’ve got some protection in place, because the Co-op has had to deal with this throughout.

‘It’s clearly a real challenge and anything that can be done to help the [testing] situation [is welcome].’

Bosses also fear that office staff will soon be back working from home within weeks due to the current testing fiasco – as supermarkets make contingency plans if workers can’t get swabbed.

The Government has come under fire after widespread reports of people having to travel hundreds of miles to get checked and being unable to book a test at all.

This is despite Ministers pledging that testing capacity will hit 500,000 a day by the end of October.

The test and trace system has buckled under the pressure since children returned to school and the Government made a concerted effort to encourage people back into the office in order to try and kickstart the flagging UK economy.

Business leaders have displayed concerns about the current testing system and emphasised that it working effectively will be vital for getting employees back to work and boosting the UK economy.

Matt Fell CBI, UK Chief Policy Director, said if the Government wants to encourage people into their workplace safely then the test and trace system will be a ‘key component.’ 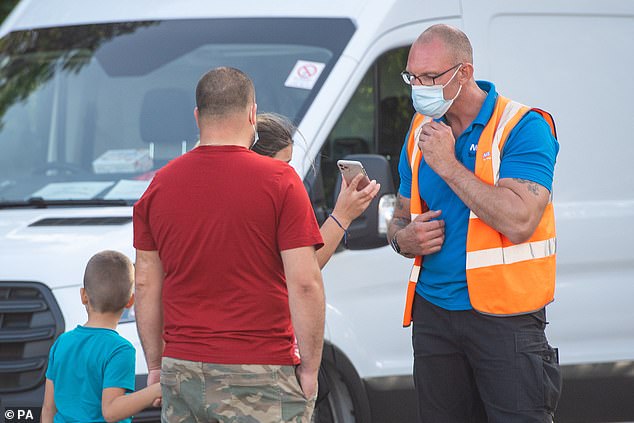 ‘Reports of people being unable to access tests in their area or waiting too long to get the results will be deeply frustrating for individual and businesses alike,’ he added.

‘No one doubts how much effort is going in to get it right. The prize is having a faster turnaround in getting results which will let people know where they stand and whether they need to self-isolate or can return to work quickly.’

Adam Marshall, director-general of the British Chambers of Commerce, told the Financial Times, the Government needed to improve the testing facility ‘immediately’.

‘A truly comprehensive test and trace programme is essential if the UK is to manage the virus without further lockdowns which will cripple businesses.’

‘Continuing delays and a shortage of tests saps business, staff and consumer confidence at a fragile moment for the economy.’

Business leaders are becoming increasingly anxious that members of staff will be left self-isolating at home with family members waiting for test results to come back, rather than being back in the office during a pivotal moment for the UK economy.

There have been long queues at some Covid testing sites, such as this one in Southend-on-Sea, but others have been deserted despite people struggling to get screened