Sao Paulo: No one knows his name. No one knows the name of the people he came from. And he appears to have lived alone in Brazil's Amazon for 22 years. 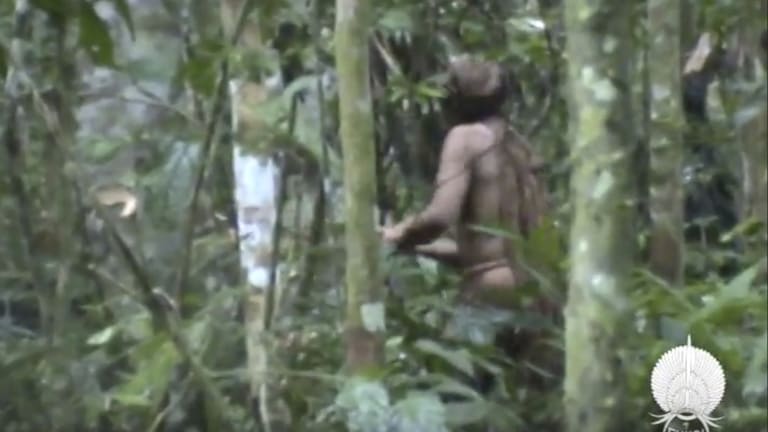 The man is seen amid the forest, in Rondonia, northern Brazil.

Video released for this first time on Thursday by Brazil's indian foundation, Funai, shows rare images of the indigenous man who is believed to be the last surviving member of his tribe. The footage was shot in 2011, though a team that tracks him says it last saw evidence he was alive in May.

The shaky images taken from a distance through foliage show a man chopping down a tree. The sound of his ax hitting the trunk and bird calls can be heard.

The video's release followed a press report that noted there existed only one image of the man, captured by a documentary filmmaker in the 1990s in which the man's face was hidden behind foliage.

Altair Algayer, coordinator of the Funai team that monitors the man, said the foundation was reluctant to release the video because it could not ask for the man's consent. But he also noted that such images help to draw attention to the plight of people who are struggling to maintain their distance from the outside world.

"Lots of people are seeking out [this video]. They want to know what is he like, how can he be seen, is he still alive," Algayer said in a phone interview. "I think this ends up helping to protect the territory."

Brazil is home to several tribes whose lands are increasingly under threat as the scramble for the resources of the Amazon intensifies.

Although sometimes described as "uncontacted", many have been victims of violent contact with pastoralists and have lost family members to conflict over lands. Others, like the last man in the video, have been contacted and repeatedly by Funai, even if just to be left alone.

Last year, 71 people were killed in such conflicts over land, the most since 2003, according to the Pastoral Land Commission, which tracks the violence.

Funai says the man in the video is a survivor of attacks by farmers that killed the rest of his group in 1995. It has been monitoring the man since 1996, when it found him already living alone in the forest in northern state of Rondonia.

The team that tracks him calls him "the indian of the hole" because of an unusual hole that he dug, Algayer said.

"We don't know who he belongs to," said Algayer, adding the man appears to be in good health and between 55 and 60.

The foundation's policy is to allow such people to live their lives in isolation, but members of the foundation have made 57 trips to monitor him as they believed him at risk. They have taken action to protect the area about 40 times.

"We always know more or less where he is in the reserve. We monitor him at a distance," Algayer said in a statement that accompanied the video’s release.

About every other month, a team enters his territory to look for signs that he is still alive and well.

"We have not observed any loggers, deforestation or the presence of strangers in the area in the last five years."

Funai said it has taken several images of the man over the years and has tried to speak to him several times since 1996. In 2005, he made clear he wanted no contact. But he has used tools and seeds the monitoring team leaves for him. They have seen that he has planted corn, potatoes, papayas and bananas, among others.

"This man, who is unknown to us, even after losing everything, including his people and a series of cultural practices, proved that, even like that, alone in the forest, it is possible to survive and resist joining mainstream society," Algayer said. "I believe he is much better off than if, way back, he had made contact."