Anger and division in American politics are creating a rising phenomenon: the public shaming and shunning of political figures while they are going about their private lives.

Few laws expressly prohibit a business from refusing service to a customer because of political views. Civil rights lawyers said that while there have been many cases in recent history involving establishments barring black people, women or members of the LBGT community, shunning people for their political ideology or affiliation has been relatively uncommon.

Until now. And in a time of intense political division, social media is magnifying the confrontations. 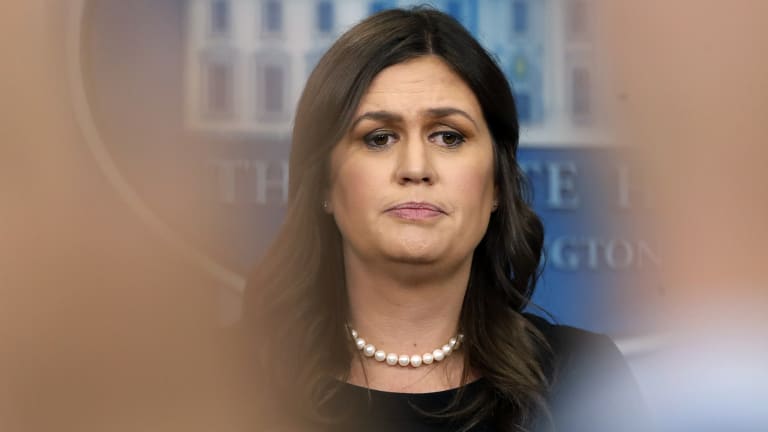 Within hours, millions of Americans knew that White House spokeswoman Sarah Huckabee Sanders was asked to leave a Virginia restaurant on Saturday. She had been out for dinner with friends, the cheese course already on the table, when the owner pulled her aside and requested that she leave. The owner and her employees said they were offended by the political views represented by the White House spokeswoman.

Pam Bondi, the Florida Attorney-General who often appears on Fox News and is closely aligned with President Donald Trump, was shouted down at a movie screening in Florida on Friday. "You are a horrible person," one protester screamed at Bondi. The local newspaper reported that Bondi was escorted out of the theatre by police.

Hecklers shouted "Shame!" at Homeland Security Secretary Kirstjen Nielsen, a public face of Trump's immigration policies, hastening her departure from a Mexican restaurant near the White House last week. Protesters even posted video of that encounter on Facebook.

Trump adviser and immigration hard-liner Stephen Miller also was confronted at a restaurant last week and called a "fascist".

Many who disagree with the policies and tone of Trump and his administration believe silence is complicity.

Democratic congresswoman Maxine Waters this weekend encouraged harassment of Trump officials in public spaces. She said on MSNBC that she had "no sympathy" for those serving in the administration "who know it's wrong – what they are doing". Waters said Trump has caused "unconscionable" damage to people and the country. 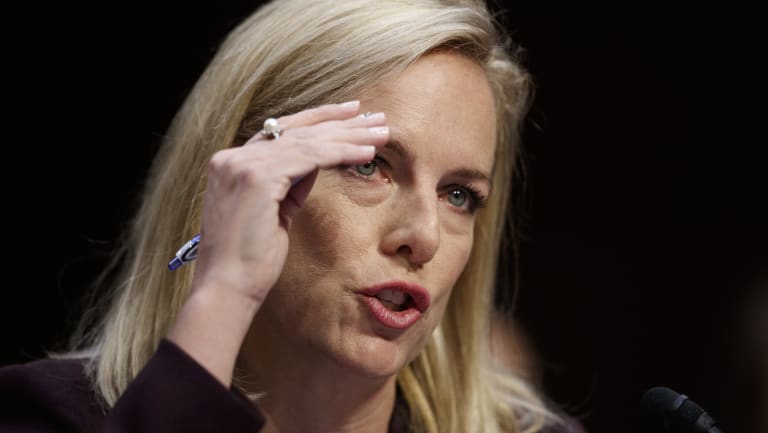 Homeland Security secretary Kirstjen Nielsen was heckled at a Mexican restaurant over the police of separating families at the border.

But others, even those who vehemently oppose the administration's politics, do not agree with such aggressive pushback.

David Axelrod, a key architect of Barack Obama's presidential campaigns, tweeted that he disagreed with those cheering the restaurant's eviction of Sanders. "I am kind of amazed and appalled by the number of folks on Left who applauded the expulsion," he tweeted. "This, in the end, is a triumph for @realDonaldTrump vision of America: Now we're divided by red plates & blue plates! #sad."

David Cole, the national legal director of the ACLU, said: "I think it's wrong, but under most jurisdictions laws, it has not been made illegal. That is probably because it rarely happens."

Only the District of Columbia, Seattle and the Virgin Islands specifically forbid a person from being refused service because of their political affiliation or ideology, according to the ACLU.

Cole represented the gay couple who sued the owner of the Masterpiece Cakeshop in Colorado for refusing to make their wedding cake because of his beliefs about same-sex marriage. The Supreme Court's ruled last month for the baker, but it's decision rested only on the bias of the civil rights commission that reviewed the case.

The court states as a general rule that philosophical or religious objections do not justify a public business refusing service, Cole said.

The Masterpiece Cakeshop case has come up often in debate about Sanders and the restaurant owner's right to refuse to serve her. 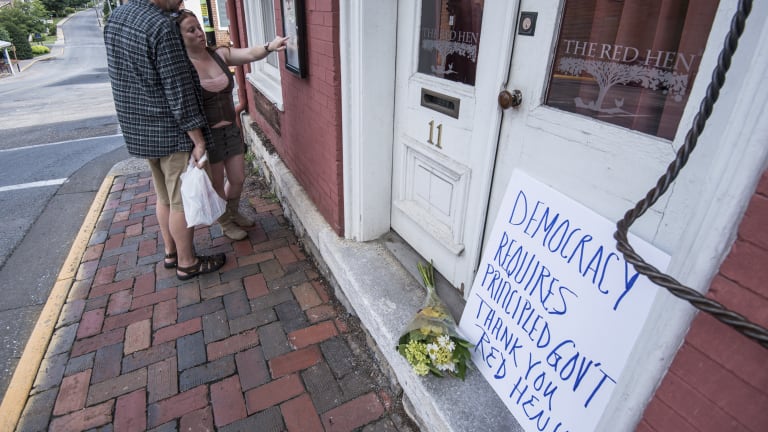 The owner of the Red Hen restaurant in Virginia said she was thinking of her staff, including LGBTI employees, when she asked Sanders to leave.

But Cole disagreed. "When people say the gay couple in Masterpiece Cakeshop could simply go down the street to another baker, that 'it's no big deal', that could also be said for Sarah Sanders. But it is a huge indignity to be turned away from a place that is open to the public."

"In some sense the business is saying, 'We're not going to treat you as a legitimate member of the public'," he said. He added that the so-called "public accommodations" laws are designed to promote tolerance and equality and the underlying principle is that a business "that chooses to serve the public must serve the public."

The immediate effect of Sanders being asked to leave the Virginia restaurant was that it triggered more harsh political rhetoric.

Name-calling and insults, many mimicking the combative style by Trump himself, poured onto the internet and TV.

Ironically, Bondi, the Florida Republican jeered at a movie theatre, was watching Won't You Be My Neighbour?, the film about Fred Rogers, the children's TV personality who taught kindness to one's highborn.

In 2012, the owner of a Virginia bakery and ice cream shop made national headlines when he declined to allow Vice President Joe Biden to hold a media stop at his place. But the owner said at the time that the exchange was "very kind, it wasn't at all heated. We just had a difference of opinion politically".

Animosity toward those with different political beliefs is far higher now.

"We're kind of back to the Colonial era in terms of public shaming, with virtual and symbolic stocks in the public square rather than literal ones," Meacham said.

During the Depression of the 1930s and Lyndon B. Johnson's presidency in the 1960s, there was much political division, Meacham said. "But the New Dealers or LBJ officials didn't face this kind of public treatment during the '30s or '60s. That said, neither [Franklin Roosevelt] nor LBJ conducted their presidencies in as contentious and confrontational a manner as Trump and his allies do, so I think the Trump world is reaping what they've sown. And that's bad for all of us."

Presidential historian Michael Beschloss recalled a 1974 incident at the Chez Panisse restaurant in Berkeley, California. Its staff did not want to serve H.R. Haldeman, chief of staff in Richard M. Nixon's White House and a key figure in the Watergate coverup.

But Beschloss said that in those days, incidents of political division were not instantly amplified through cellphones and social media accounts.

Another key difference: In the end, Haldeman was served.

According to an account of the incident on NPR, Haldeman personally thanked Jeremiah Tower, then head chef at Alice Waters' iconic restaurant, for "not shaming him in front of his daughter".