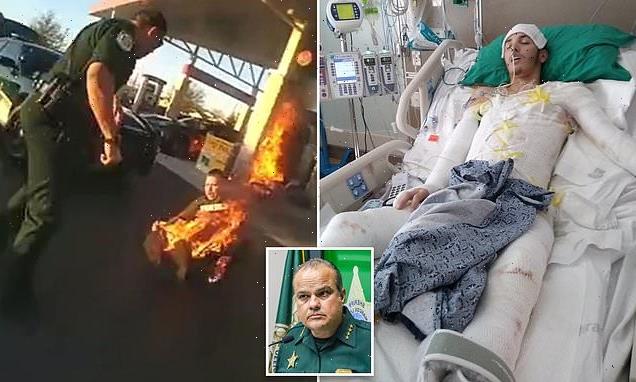 The lawyer for a dirt bike rider who was ‘cooked alive’ after being Tasered by a cop at a gas station has slammed the local sheriff for deploying ‘military-like tactics’.

He said the police chief oversaw an ‘illegal’ attack by Deputy David Crawford and later orchestrated a ‘calculated and deceptive’ effort to quash information.

Barreto was roasted alive after being Tasered by Crawford at the gas station in Florida following a car chase when he performed stunts in the street.

He suffered horrific third-degree burns across 75 per cent of his body but somehow survived and is now battling his wounds in hospital.

NeJame last night ripped into Sheriff Lopez for the conduct of his officer and accused him of trying to conceal information about the case. 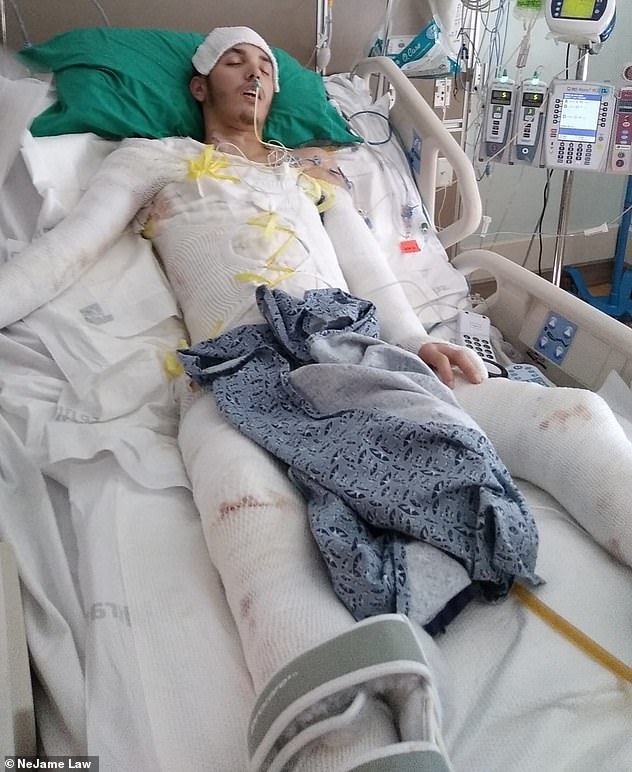 The attorneys representing the Florida dirt bike rider Jean Bareto, who was caught in an explosive gas station fire after a deputy tasered him while he was pumping gas are demanding the state intervene in cops’ investigation of the incident and reprimand the officer responsible 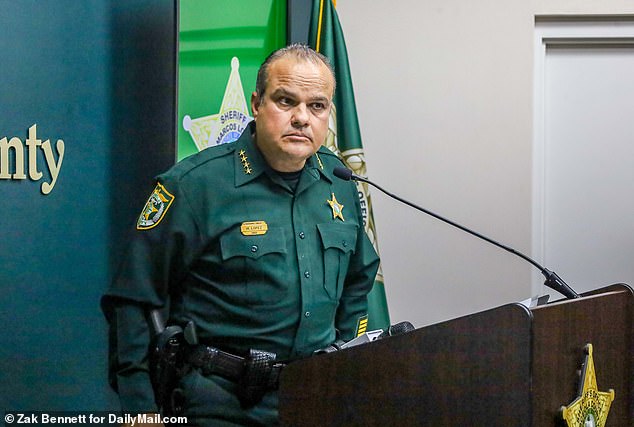 Lopez said Crawford did not make a statement on the incident, adding: ‘He invoked his right (to silence).I don’t know what was going on in his mind that day, I can’t speak for him. Our policy clearly states you should not use a taser near combustible material. ‘We are putting our piece of the puzzle together’ 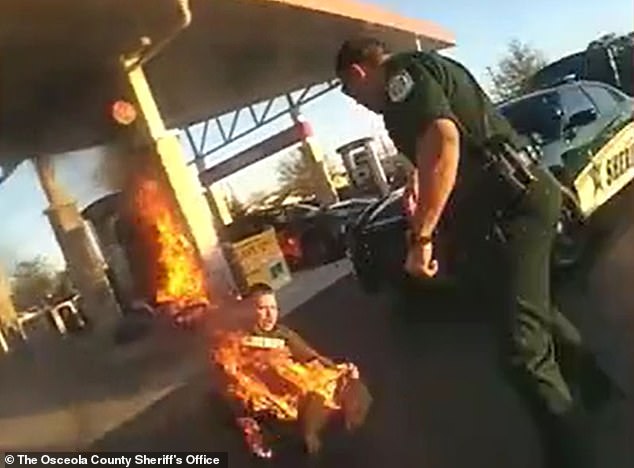 Another video from the perspective of Deputy Christopher Koffinas begins with him following Barreto in a police cruiser before arriving, applying a Taser to Barreto and then seeing Barreto and Crawford catch fire

The lawyer said: ‘Sheriff Lopez intentionally did not disclose the damning and incriminatory contents of those videos, knowing how they only highlighted the reckless, violent, dangerous, and unnecessary actions of his deputies brought about the Sheriff’s military-like tactics and policies.

‘Only after the continued pressure from the media and Mr. Barreto’s attorneys and the ensuing public outrage did Sheriff Lopez finally hold the long overdue press conference after three months.’

He continued: ‘The manipulation was not accidental. It was calculated, blatant and intentionally deceptive.

‘His further attempt to disparage Jean Barreto, who never possessed a firearm and was illegally attacked and then set ablaze, was despicable.’

He went on: ‘The horrific body cam footage depicted the barbaric actions of Sheriff Lopez’s Osceola County Deputies, further incriminating the Sheriff’s Department for its heinous and outrageous actions, brought about by Sheriff Lopez’s failed and dangerous policies.’

He added: ‘The reckless actions of this sheriff’s department and the wanton disregard for human life are on full display. 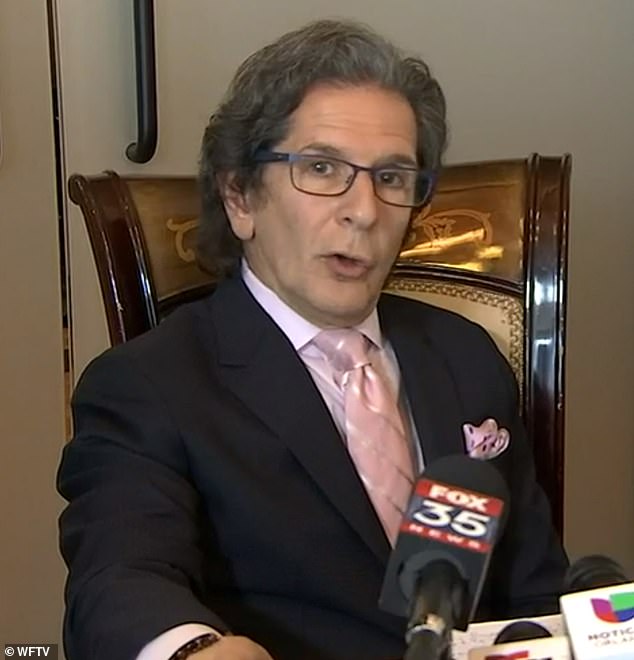 During a press conference held Wednesday, Barreto’s attorney, Mark NeJame, demanded the Florida Department of Law Enforcement and US Department of Justice take over the case, and open an investigation into the handling of the incident by the Osceola County Sheriff’s Office 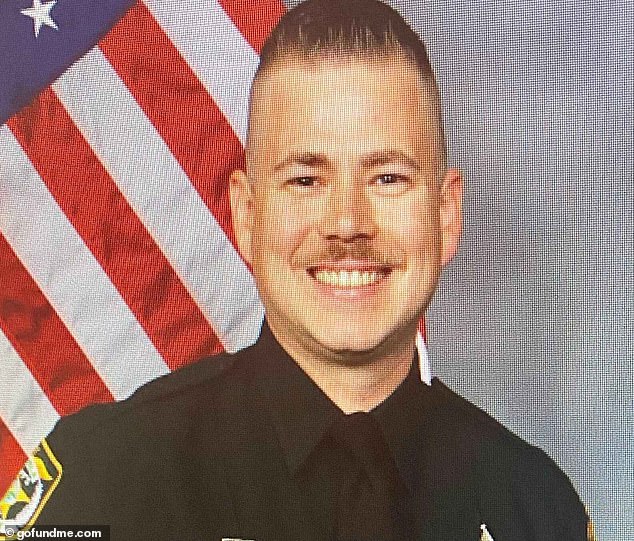 A source told DailyMail.com what Deputy Crawford did was ‘absolutely reckless. At the end of the day, did this young man deserve this?

‘If he survives this his life will be destroyed. Part of training curriculum that every law enforcement officer is taught is to determine appropriate use of a weapon.’

The insider added: ‘It is obvious that this was not an appropriate environment to use the taser.’

Referring to the Osceola County Sheriff’s Department’s policy on Taser use which the source provided to DailyMail.com it states that ‘serious injuries could incur as a result of secondary factors as a result of CEW activation possibly drown in a body of water, fall from an elevated area, around flammable substances.’

The source shared that ‘the sheriff’s policy and procedures are reckless and dangerous.

They continued: ‘Our law enforcement officials are there to protect the community and should be held to a higher standard and officer Crawford should be held accountable.’

A second source told DailyMail.com that the office being charged ‘at times can be reckless.’

‘I am not surprised by what happened. This is what happens when poor decision-making takes place,’ they said.

Sickening body body camera footage showed the moment the deputy Tasered the dirt bike rider after a car chase because he was pulling stunts on the road.

Deputy Crawford was heard screaming in pain and begging his fellow officers to ‘put out’ the fire on his legs as he desperately rolled around.

Meanwhile Barreto was ‘cooked alive’ in the fireball which left him with third-degree burns on approximately 75 per cent of his body.

Both remain in hospital after the February 27 incident at the Wawa gas station in Florida. 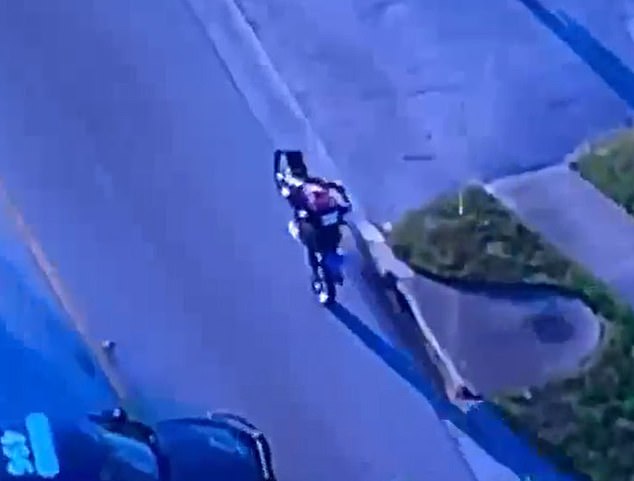 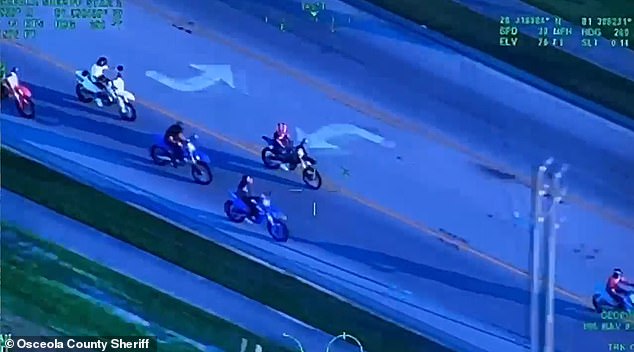 Police are also planning to charge Barreto with several offenses, including resisting arrest, if he survives.

The first is from Crawford’s camera and shows him approaching the gas pumps where Barreto was filling his bike before tackling to the ground.

‘Get off the bike! Get on the ground now,’ Crawford can be heard yelling in the video as a fellow officer pulls out his Taser and fires it at him.

Footage shows gasoline pouring onto the ground after the officers failed to allow Barreto to put on his gas tank before they tackled him.

Crawford acknowledges the gas, saying: ‘Kill the pump, kill the pump, there’s gas’ and his fellow officer drops the Taser.

But Crawford then picks it up, warning: ‘You’re about to get tasered again, dude,’ the fires the Taser. 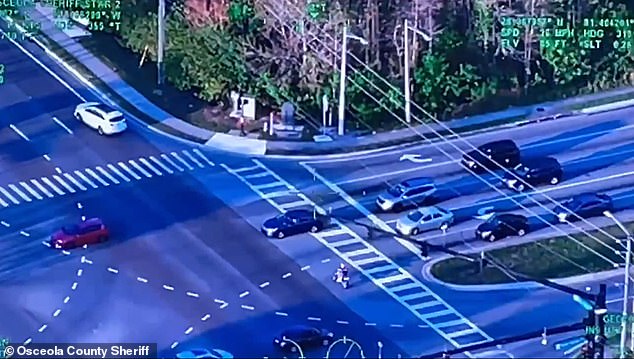 At one point in the footage, the rider confirmed to be Barreto can be seen driving through a red light at a busy intersection, narrowly missing multiple cars

Moments later, you can hear the Taser and see the flames erupt, forcing Crawford to roll around on the ground and scream as he catches fire for about 30 seconds.

Another video from the perspective of Deputy Christopher Koffinas begins with him following Barreto in a police cruiser.

Eventually, Koffinas gets to the scene and rushes in to help with the arrest, pulling out his Taser.

About a half minute later, Crawford is heard off-camera saying he was going to use the Taser before you begin to see the flames.

Koffinas begins to put out the fire on his own pants before helping Crawford, whose legs are enveloped by the blaze.

Eventually, another officer pours Gatorade on Crawford to put out the fire. Koffinas calls for an ambulance and walks over to Barreto, who is handcuffed on the ground with much of his clothing apparently burned off.

Barreto says: ‘Get me to the hospital right now.’

‘I wasn’t running,’ Barreto responds. Barreto continues to fight for his life. Crawford is reportedly on paid leave.

Osceola County Sheriff’s office has been approached for further comment.