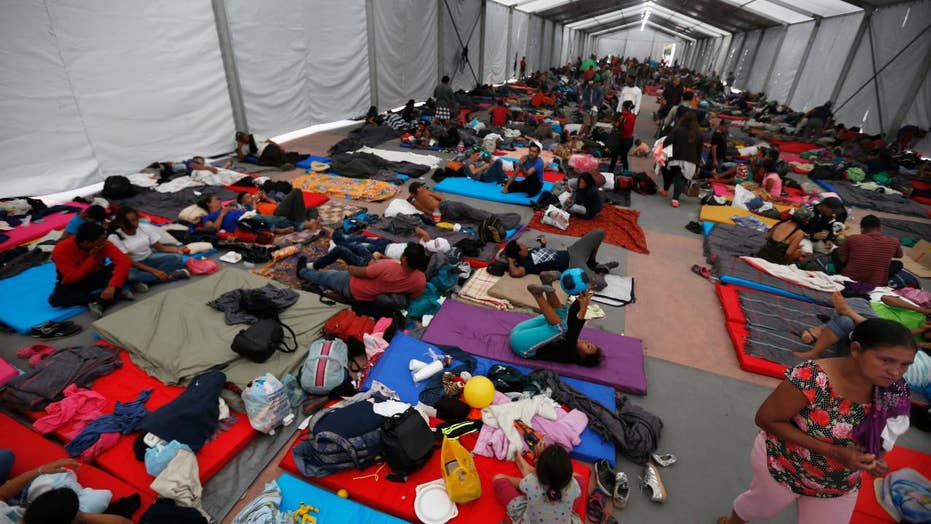 Thousands camp out in the city before continuing their journey to the U.S. border; William La Jeunesse reports from Mexico on the progress.

MEXICO CITY – The park here hosting some 7,000 migrants looks like something out of a renaissance fair, with dozens of small tents giving away shoes or offering a host of services, like dental work, medical care, telephones, haircuts, food and, perhaps the most important product – legal advice.

A line began to form Tuesday outside the Institute for Women in Migration before a 10 a.m. seminar. A dozen men formed a circle around U.S. attorney Anna Joseph when she began to speak.

“We are telling them it’s going to be difficult,” she said. ”We’re telling them this administration is not amenable to asylum right now, so even though many have legitimate claims, they’re going to be up against a very tough system at the moment due to orders from above.”

“Above” means President Trump. It’s ironic, some say, that a group diametrically opposed to the president's immigration policies is indirectly helping make his case.

Trump wants the caravan to turn around, promising to unleash military assets and potentially amend asylum laws to stop their entry. Yet, Joseph’s advice is the first concrete, straight-forward and honest assessment of the situation many received in weeks.

After hearing some of the migrants’ individual stories, Joseph suggested some might reconsider their dreams of living in the U.S. 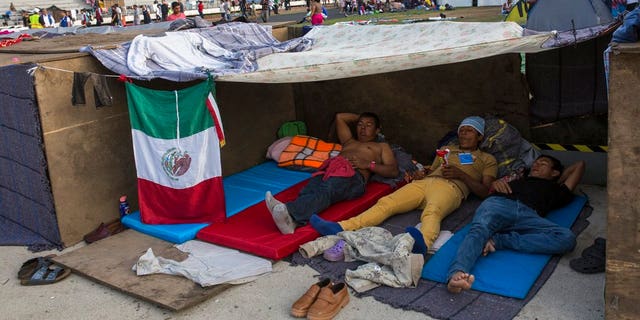 Central American migrants rest at the Jesus Martinez stadium in Mexico City, Tuesday, Nov. 6, 2018. Humanitarian aid converged around the stadium in Mexico City where thousands of Central American migrants winding their way toward the United States were resting Tuesday after an arduous trek that has taken them through three countries in three weeks. (AP Photo/Rodrigo Abd)

“A lot depends on how the administration decides to address the situation and the role of the military,” she said. “We’re telling people there is already a wait of over 1,000 people in Tijuana.”

She said legal advisers are not trying to deter people, “but trying to give them options and information.”

After talking to Joseph, Honduran migrant Jovan Ochoa said he would stay in Mexico.

“If I get a work permit, I will stay in Mexico,” he said. “I didn’t pay attention to the asylum part. All I want is permit to work because I can’t lose time.”

Marco Flores had a different problem.

“I was deported twice for crossing illegally,” Flores said. “So I have to wait three years. I asked if I could ask for forgiveness to enter the United States.”

Forgiveness is not part of asylum law, which tends to be rigid and has become more so under Attorney General Jeff Sessions. Unlike the Obama administration, which tweaked the rules to allow for claims of domestic and gang violence, the Trump administration returned to the original statutory language, which only allows non-citizens to remain in the U.S. if they can establish a credible fear of persecution at home based on race, religion, political thought, nationality or social class.

That is a small minority among the roughly thousands of migrants who fill Jesus Martinez Stadium, sleeping in tents, bleachers or under tarps. Caravan organizers were scheduled to meet with federal officials to secure transportation, work permits and residency cards for the caravan migrants. It’s unclear if any are in the offing, but caravan leaders say they are trying.

In Mexico City, the caravan is roughly 600 miles from McAllen, Texas and more than twice that to Tijuana, their stated goal. Their day of departure from Mexico City remains unknown, and many factors will determine when the bulk of the caravan will arrive.

But many migrants say they will split off from the main group the closer they get the U.S. border.