BEIRUT (Reuters) – Lebanon’s cabinet is expected to halve ministers’ wages on Monday among other reforms in a bid to ease an economic crisis and defuse the biggest protests against the ruling elite in decades.

Across the country, people blocked roads for a fifth day. Schools, banks and businesses closed. Hundreds of thousands of people have flooded the streets, furious at a political class they accuse of pushing the economy to the point of collapse.

Under pressure, Prime Minister Saad al-Hariri and top officials drew up a package of steps over the weekend, some seen as vital to reviving confidence which may alleviate strains in Lebanon’s financial system.

The reforms were under debate at a cabinet meeting that President Michel Aoun chaired at the Baabda palace on Monday.

In central Beirut, people prepared for another day in the streets. Soldiers barricaded the paths to parliament. Graffiti scrawled on building walls declared “Revolution”.

“If we get reforms, for a start it’s good, to calm down the storms, people are angry … but in the long term, I don’t know if it will make a change,” said Rida Jammoul, a football coach.

Ziad Abou Chakra pledged to keep protesting until the government fell. “We will stay here and we won’t open the roads whatever happens,” he said, manning a roadblock north of Beirut.

Hariri, who leads a coalition mired in sectarian and political rivalries, gave his cabinet a 72-hour deadline on Friday to agree reform plans, hinting he might otherwise resign. The deadline expires on Monday evening.

The package includes a 50% cut in the salaries of current and former presidents, ministers and lawmakers, and benefit cuts for state institutions and officials, officials told Reuters.

It further provides for the central bank and private banks to contribute $3.3 billion to achieve a “near zero deficit” for the 2020 budget.

The government plans to privatize the telecommunications sector and overhaul the costly and crumbling electricity sector, both major strains on Lebanon’s finances.

Protesters have said this would not be enough to send them home, demanding the demise of politicians they accuse of rampant corruption. “This is not enough. We want early elections and justice from all those who stole from the state,” said George Raad, a public sector employee.

The rallies across Lebanon have been a historic outpouring of dissent against politicians, some of them civil war-era leaders, who are widely seen to have used state resources and influence for their own power and gain. 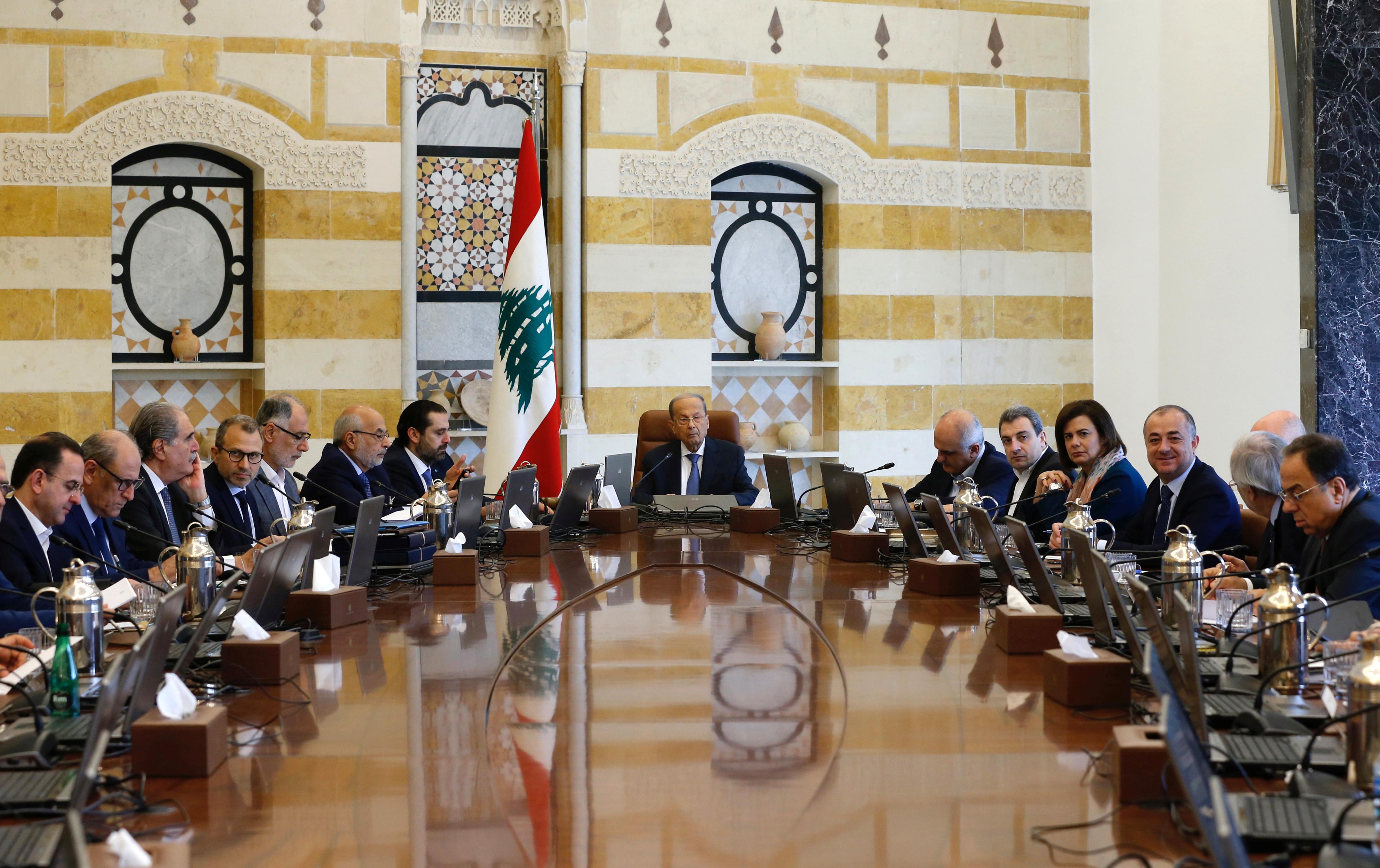 But Aoun said it was unfair to tarnish everyone with corruption charges, and that banking secrecy should be lifted from the accounts of current and future ministers.

“What is happening in the streets expresses people’s pain, but generalizing corruption (charges) against everyone carries big injustice,” he said.

A chorus of voices, from union leaders to politicians, has joined calls for Hariri’s government to resign.

Opponents of that include the powerful, heavily armed Shi’ite Hezbollah movement backed by Iran. Its leader said on Saturday Lebanon did not have time for such a move given the acute financial situation.

The Lebanese economy has been hit by political paralysis and regional conflicts, among other factors. Economic woes have been compounded by strains in the financial system that accumulated as capital flows into the country have slowed down.

These capital inflows are needed to finance the state deficit and the needs of its import-dependent economy.

The pressures have shown up in the real economy of late where it has become harder to obtain dollars at the official exchange rate. Dollars have become harder to find and the Lebanese pound has been under pressure. “The message to the politicians is don’t ever underestimate the power of the people because once they unite they will explode – peacefully,” said Hiba Dandachli, 36, a social entrepreneur who was helping clean up central Beirut on Monday.

“There are children, families, all from different religions and backgrounds,” she said.