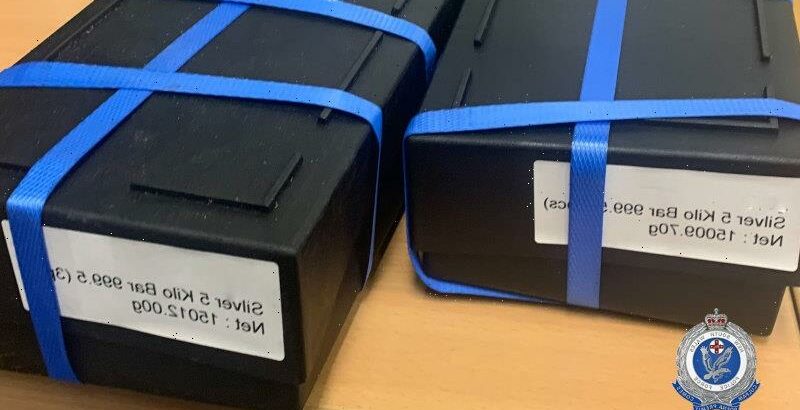 A precious metal distributor who was the victim of a theft of almost a tonne of silver bars from a shipping depot has launched legal action against the transport company, alleging it was negligent and breached its contract to protect the million-dollar haul.

But sources in NSW Police confirmed to The Age and Sydney Morning Herald that the 990-kilogram package was labelled as “engineering parts” when it arrived at the depot before it was stolen sometime between November 26 and 29 during its transport from Sydney to Melbourne. 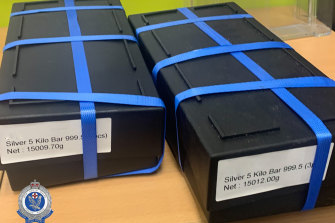 The silver was wrapped in black packages. Credit:NSW Police Media

Detectives from the NSW Robbery and Serious Crime Squad are still searching for 64 boxes of silver bullion, weighing about 960 kilograms, that was stolen. Two boxes were left behind at the depot.

Precious metal refiner and distributor Pallion filed documents in the Supreme Court of West Australia on May 25 seeking more than $1 million and alleging that carrier Sadleirs Transport was under an obligation to protect the silver cache and failed to install tracking devices inside the packages.

Police said last December that the truck left Maldon, near Picton on Sydney’s southern outskirts, about 4.30pm on November 26.

Sometime between then and 8am on November 29, when the truck arrived in Melbourne, the silver went missing. Police believe it was stolen, and the theft was reported by staff onsite as soon as the discovery was made.

The heist saw the loss of 192 bars each weighing five kilograms – a total of 960 kilograms. The precious metal was valued at the time at around $1.015 million, according to police.

Pallion claims that Sadleirs “failed to load the silver onto a train that same day to its final destination in Melbourne in breach of the transport agreement,” according to court documents.

“[Pallion’s] loss includes but is not limited to the costs to purchase the replacement silver, remould and the delivery of the new silver bullion.”

A spokesperson for Sadleirs Transport said they could not comment on the lawsuit until they had been served with legal papers by Pallion.

A spokesperson for the Pallion Group said the litigation was launched by an insurer in their name and that they support the claim. Pallion also said it complied with “all the security protocols required by our insurers and did so on this occasion”.

“These security protocols involve, amongst numerous others, never labelling precious metals such as this would increase the risk of theft.”

Detective acting Superintendent Paul Smith said last December that police were investigating the possibility that the thieves used information gleaned from inside one of the organisations involved to carry out the heist.

“Certainly, a line of inquiry that we’re looking at is people who have inside knowledge as to this consignment of silver and it being transported between Sydney and Melbourne,” he said.

“These type of bars, they’re quite large and quite heavy, you know, with a stamp with an identifier on them that would make him certainly identifiable.”

The truck was a Kenworth towing a silver Krueger trailer. Detectives are investigating the theft through Strike Force Caimon. Police said they did not know the precise location where the silver was stolen.

Do you know more? Confidentially get in touch at [email protected]