Slaughtered in TWO seconds: Leopard pounces on an unsuspecting gazelle and swiftly kills her for her cubs

A leopard’s brutal hunt on an unsuspecting gazelle has been captured in a series of amazing close-up shots, which captured the two-second attack.

The images show the leopard leap towards its prey before sinking its claws in and dragging the helpless animal to the floor in the Maasai Mara national park in Kenya.

The merciless hunt was captured by photographer Jeffrey Wu, 52, who claims the leopard took just three steps and two seconds to floor the gazelle before dragging the body up a tree to feed her cubs. 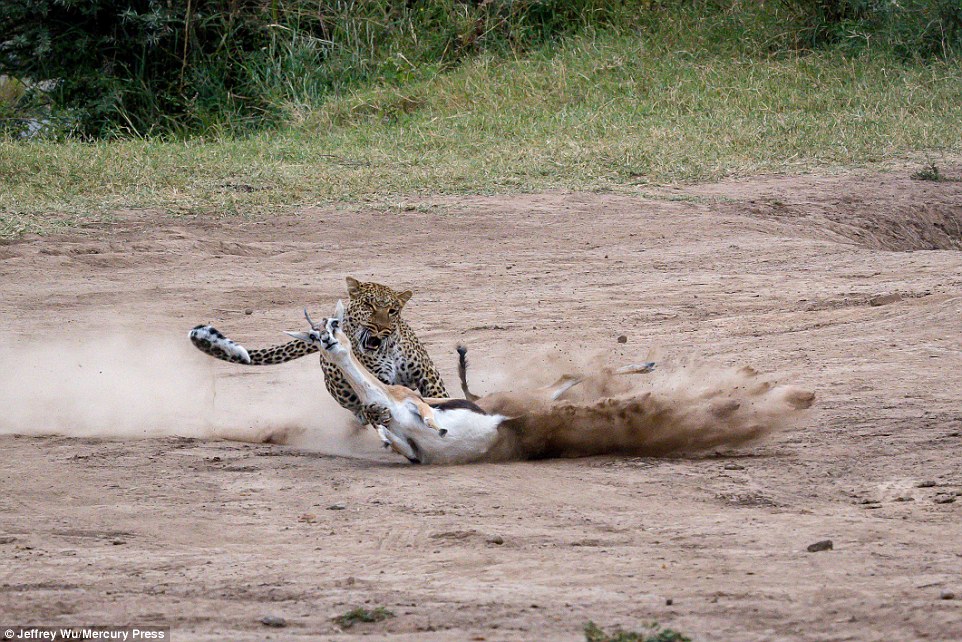 The wildlife photographer, who was leading a photographic tour of the reserve, has followed the same leopard for four years at Kenya’s Maasai Mara national park.

Jeffrey said he was amazed to see her hunt as the predators usually hunt for prey during the night.

Jeffrey, from Toronto, Canada, said: ‘I have followed her for four years, she is known as Pretty Girl locally.

‘She has two cubs – one is 15 months and one is four months. 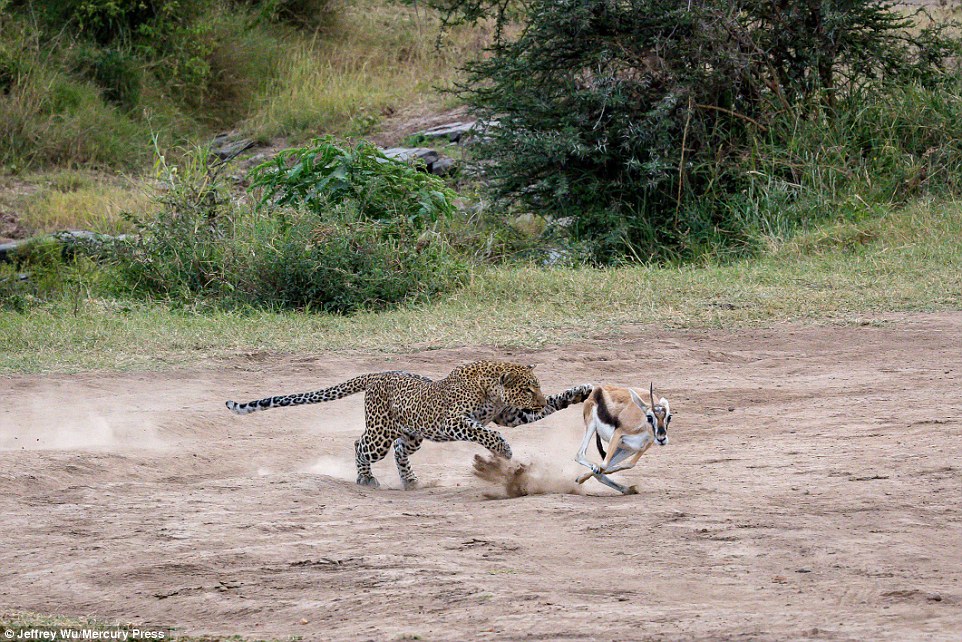 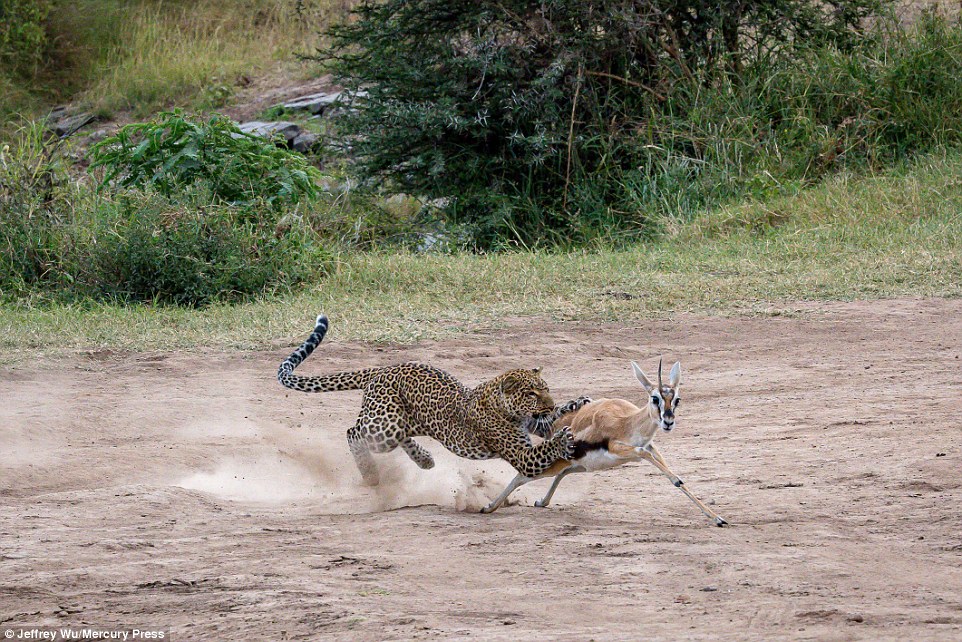 ‘Normally a leopard is nocturnal and hunt at night, but she has three mouths to feed so she also hunts in daylight.

‘We waited on her for 10 hours and then at around 5pm a few Thomson’s gazelles came to the river to drink.

‘She waited patiently and when the smallest was about three metres away from her hiding place, she launched out of bushes and in three steps she overpowered the gazelles.

‘After the kill she took the prey up to a tree to prevent other carnivores from stealing the food and went calling to her cubs to have dinner.

‘I shot 19 frames, that means it took only two seconds for her to catch and kill the gazelle. 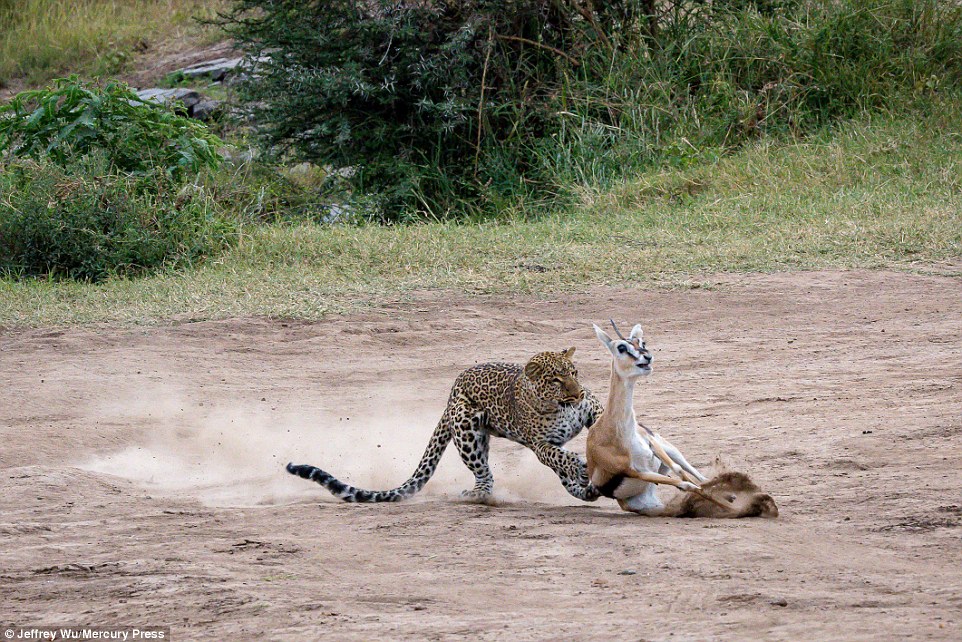 The photographer waited for 10 hours to get this shot, before a small group of Thomson’s gazelles came to the river to drink when one was grabbed by the patiently waiting leopard 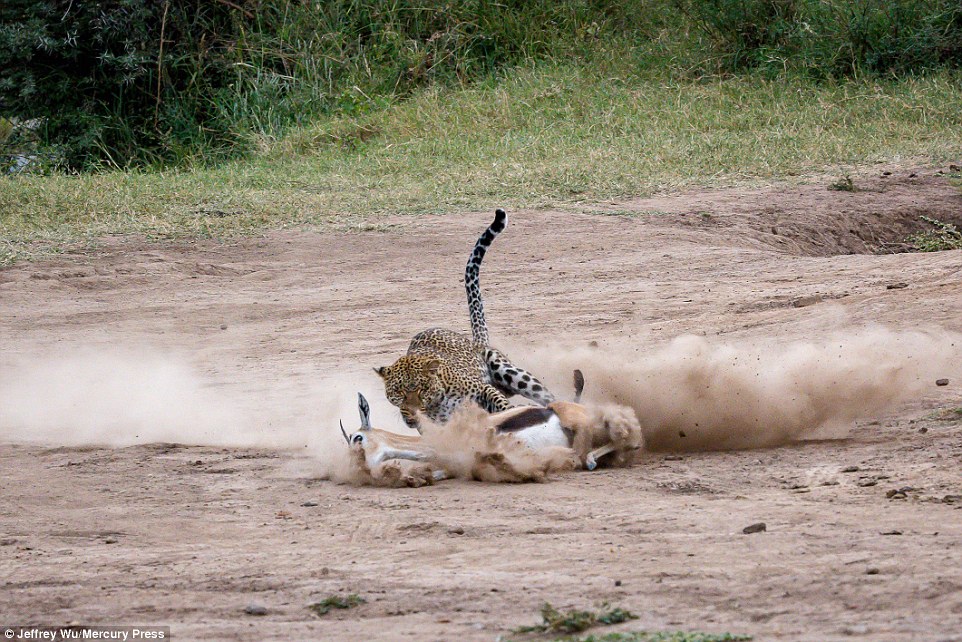 ‘We did spot her earlier in the morning and watched her try to hunt an impala, but she failed.

‘Later that morning when the tourist vehicles came she hid and spent the whole day in thick bushes by the river crossing, hoping to catch any animals that came to drink water.’

Jeffrey was leading a photographic tour of the nature reserve, but never expected to capture a leopard during its hunt.

Jeffrey said: ‘After witnessing the hunt I looked at my camera and checked my images three times.

‘I couldn’t believe I got all 19 frames of this sequence all in focus, and I just realised I got something I can be proud of.

‘Leopards are not difficult to spot, however usually you only see them sleeping in the thick bushes or up on a tree.

‘Hunting is very rare to see as they are usually only active at night.’