A panicked warthog’s desperate struggle to escape from the clutches of a hungry pregnant leopard has been captured in a series of stunning action shots.

Incredible images show the 130-pound leopard stalking its prey in a thicket of bushes before the warthog becomes aware it is about to become dinner and makes a run for it.

Unfortunately for the warthog – a fearsome animal in its own right – his speed is no match for that of the predator who quickly catches up and pounces before enjoying a well-earned meal. 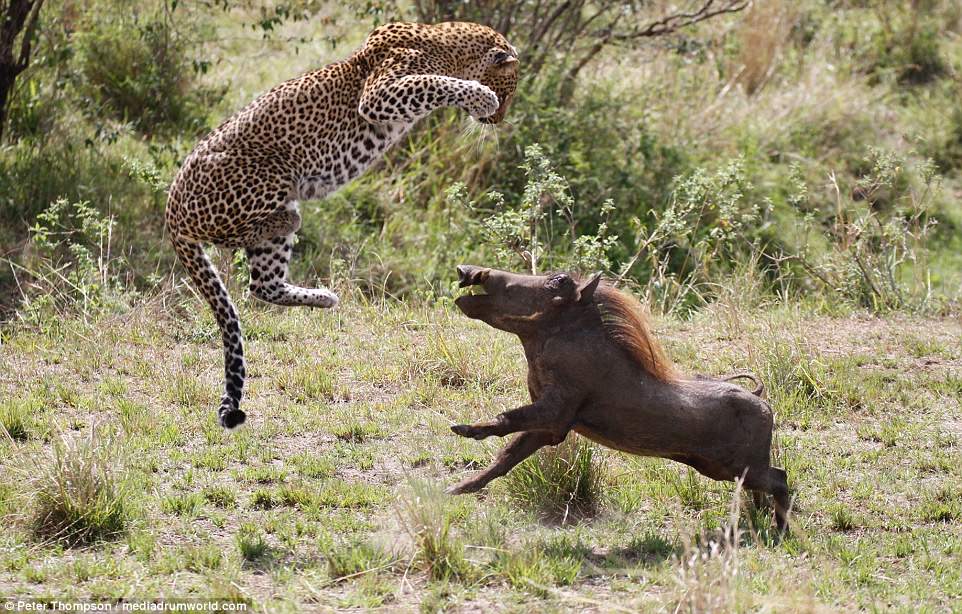 In flight: A hungry leopard leaps through the air while the desperate warthog cowers in terror in Maasai Mara, Kenya 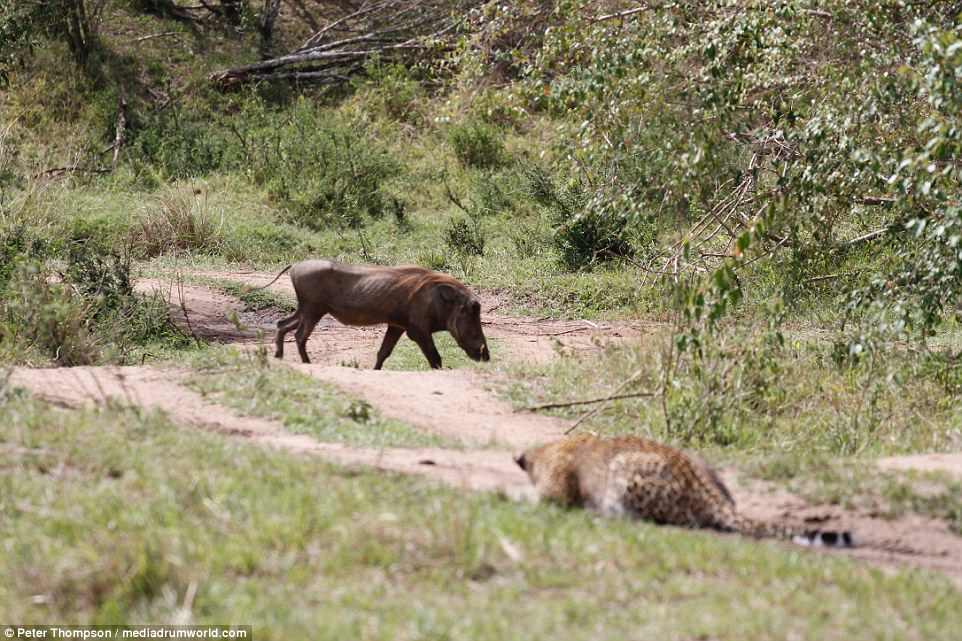 Oblivious: The warthog strolls across grass unaware that the leopard is watching it and getting ready to strike 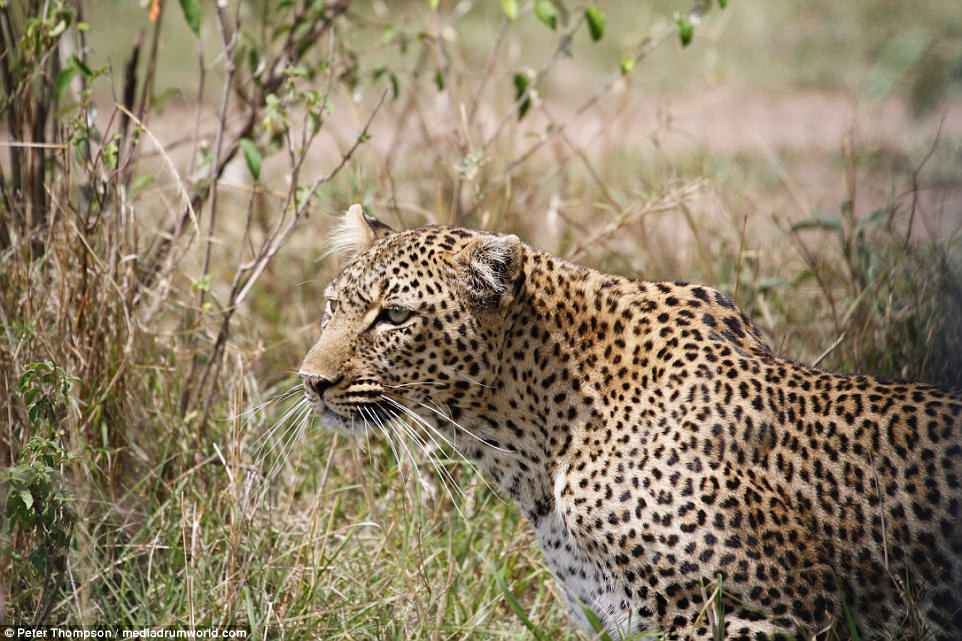 Watchful: The pregnant leopard keeps an eye on its target as it gets ready to pounce on the unsuspecting warthog 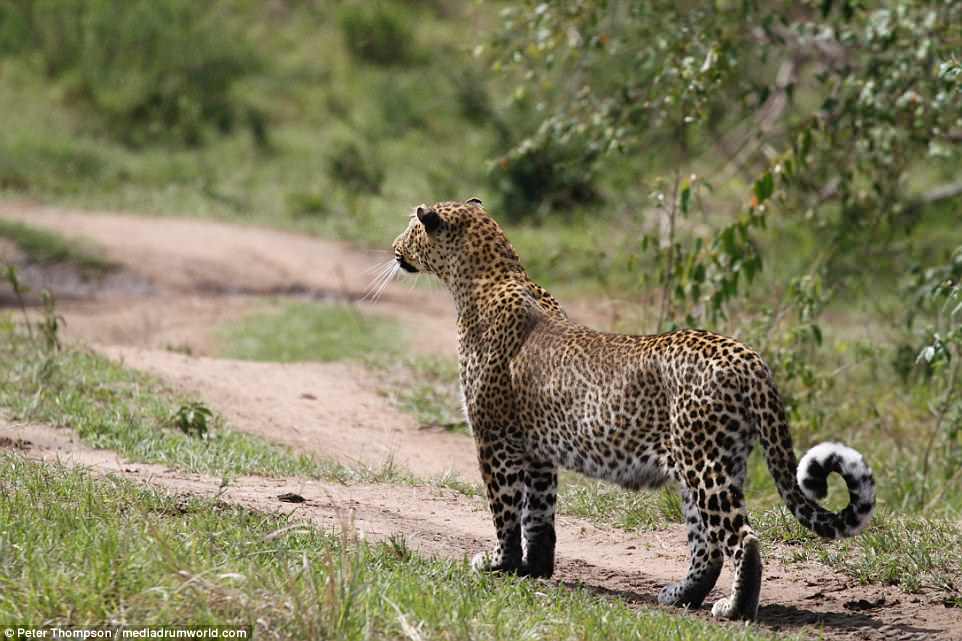 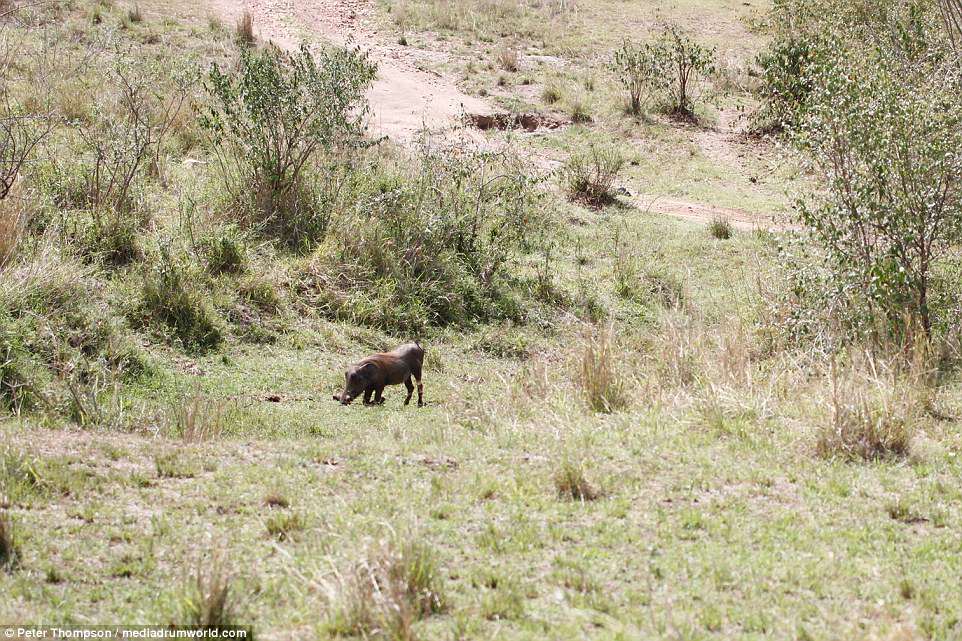 Target: The warthog sniffs around in the grass not knowing that the leopard is watching and preparing to pounce 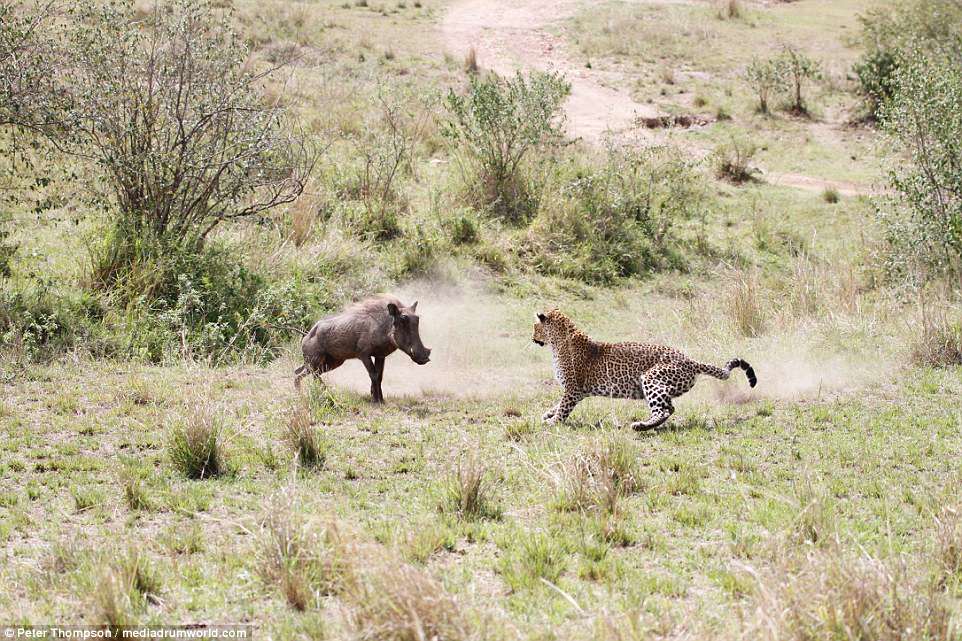 Guess who: The leopard confronts the warthog which suddenly becomes aware it is about to be eaten 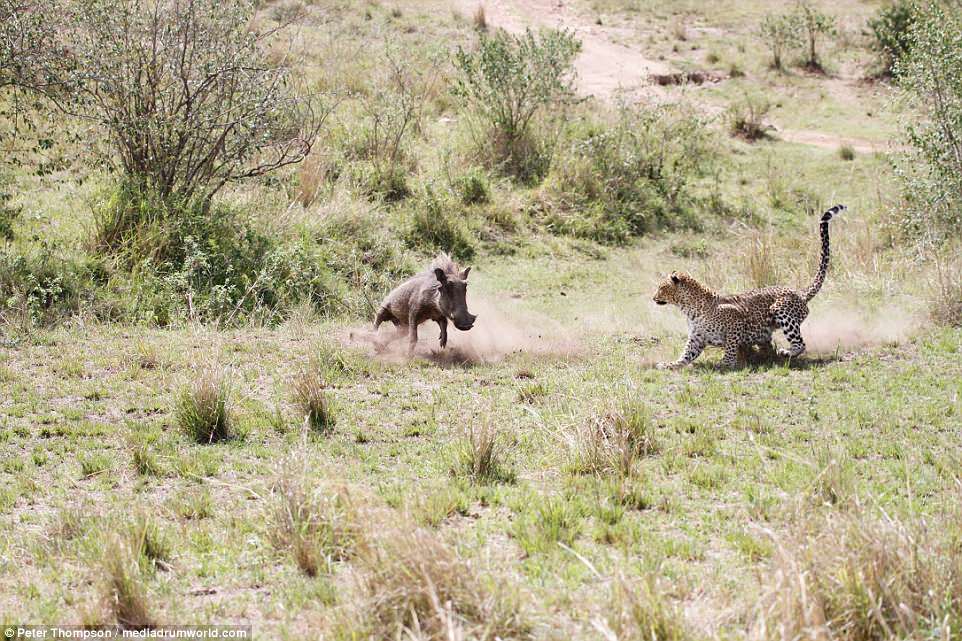 Panic: The warthog tries desperately to escape from the leopard after realising it is about to become its dinner 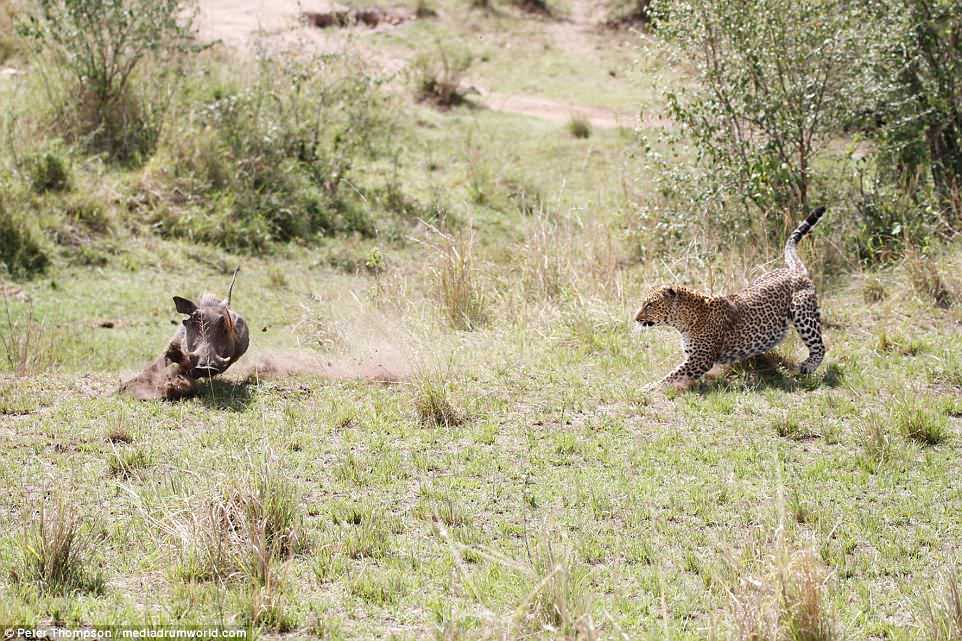 In control: The leopard quickly catches up and pounces on the warthog despite its terrified attempt to run away 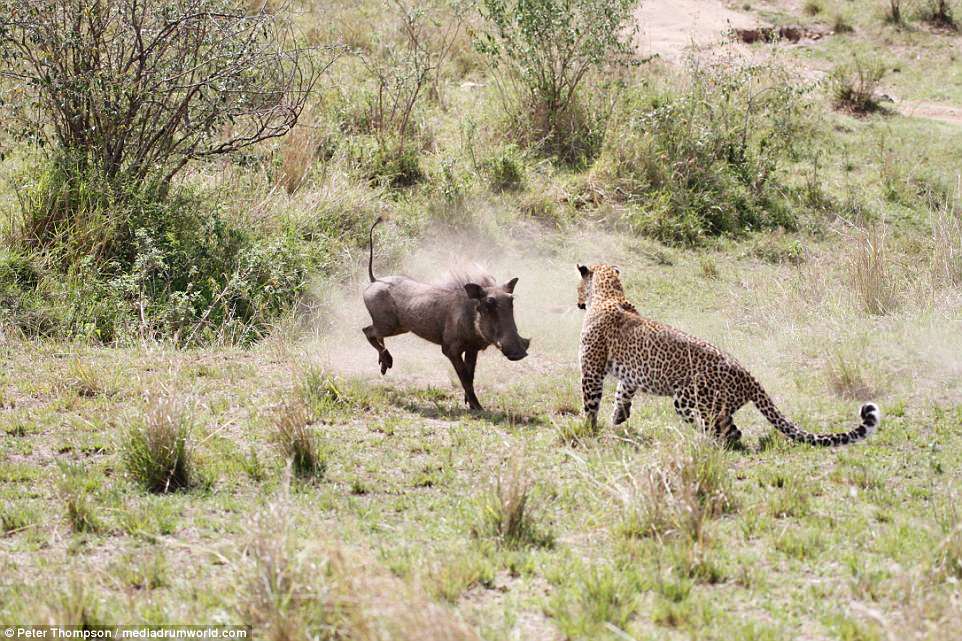 Doomed: The warthog tries to run away but its speed is no match for the much faster leopard 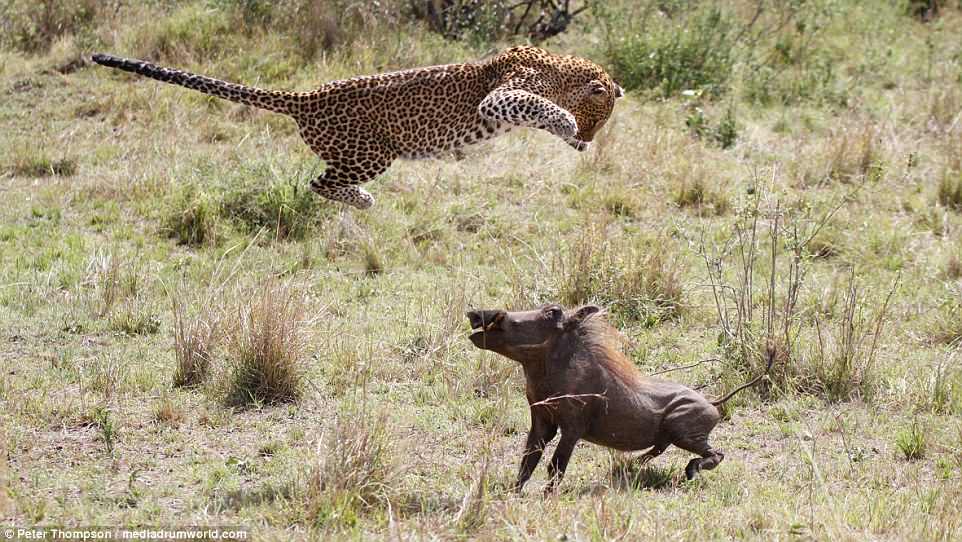 Graceful: The pregnant leopard hangs in the air as it leaps to trap the warthog which is left unable to move

He said: ‘My wife Stacey and I were driving to a meeting at another camp.

‘It was after lunch we left and we had only made it a couple hundred metres outside of camp when we spotted a female leopard sleeping under a small bush. We pulled up and just watched this amazing creature sleep.

‘Within two minutes of watching she woke up and started stalking a warthog that we had earlier passed on our way out of camp. She went straight into stealth mode and we knew it was on.

‘Stacey was driving and decided to reposition the car to a better vantage point. The leopard stalked and followed the hog into a nearby thicket, we thought it was all over and we were not going to witness the ‘kill’.

‘It was silent and we couldn’t hear anything, I had time to set the camera. All of a sudden, out shot the hog and the leopard in tail very close.

‘What happened next took less than five minutes and an arm’s distance from the vehicle. It was cat and mouse. The leopard was playing with the warthog.

‘It was like she was toying with the thing. You could tell she wanted to end this and eat. They lined up for a last charge, she rolled in the air, landed on top and within seconds it was over.

‘We were the only ones who saw the spectacle as it’s rare to watch a leopard hunt in the middle of the day at 2pm and the leopard was pregnant at the time. Pure luck.’ 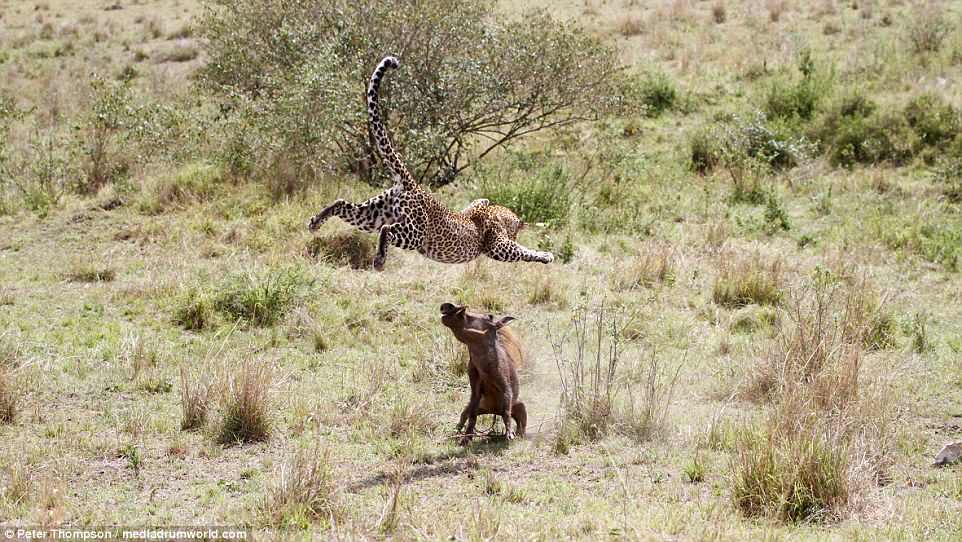 Final moments: The warthog has no time to escape as the leopard jumps on top of it in the national park in Kenya 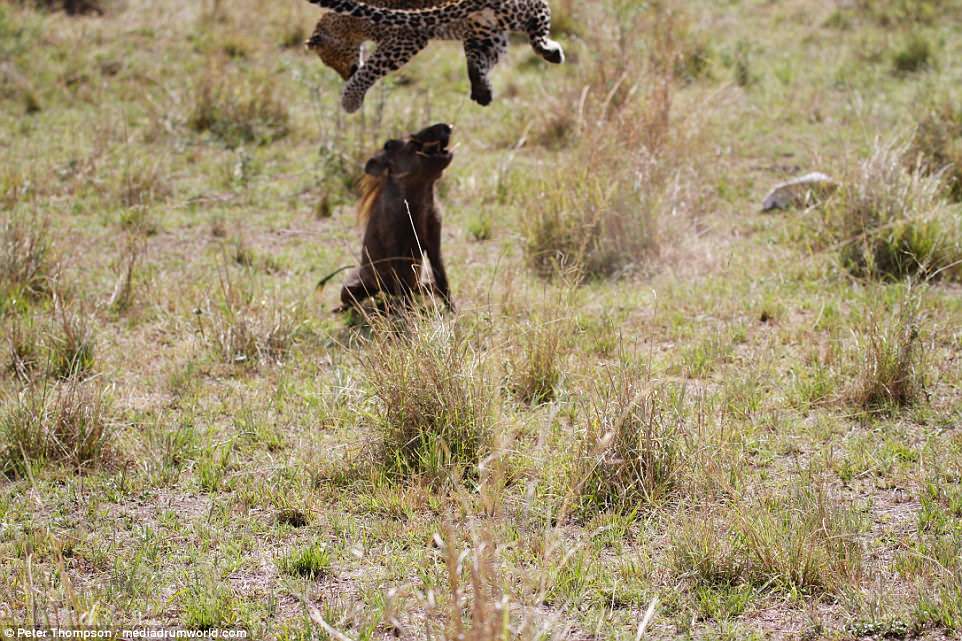 Game over: The warthog is rooted to the spot as it watches the leopard jump right on top of it 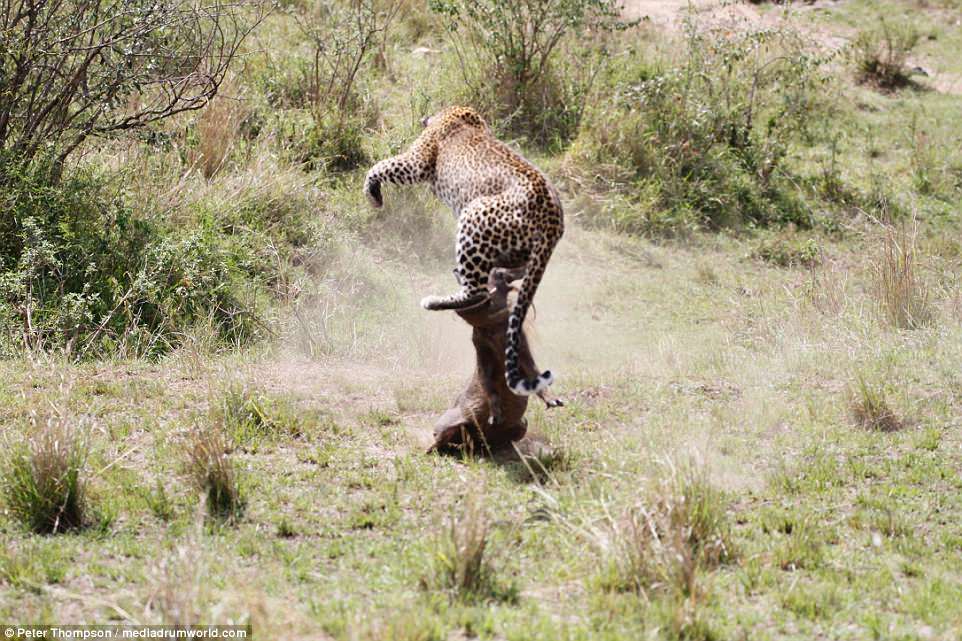 No escape: The leopard prepares to land on top of the warthog after jumping and rolling in the air 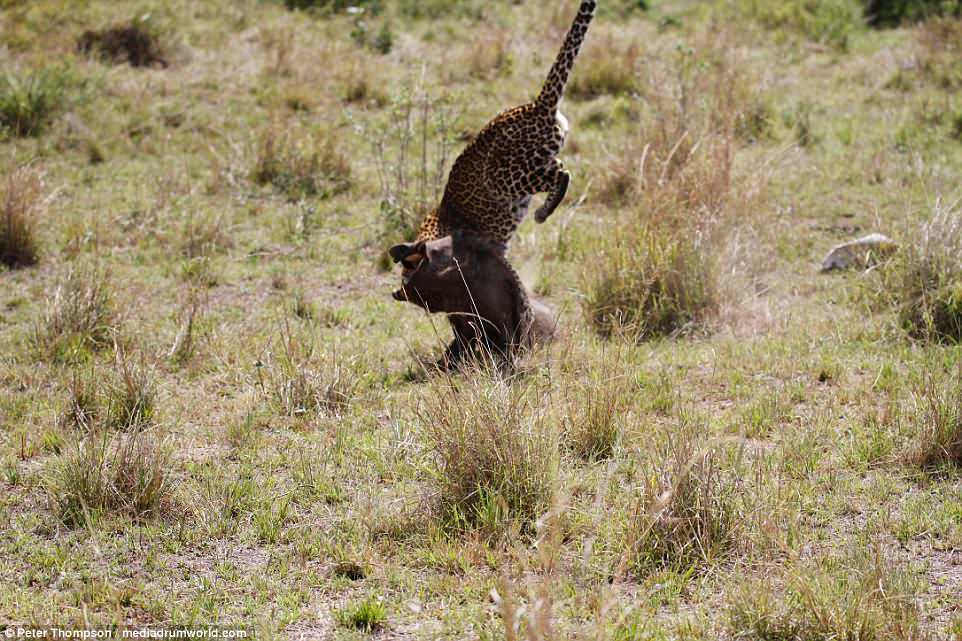 Crash landing: In a graceful jump the leopard flies through the air before falling to earth on top of the warthog 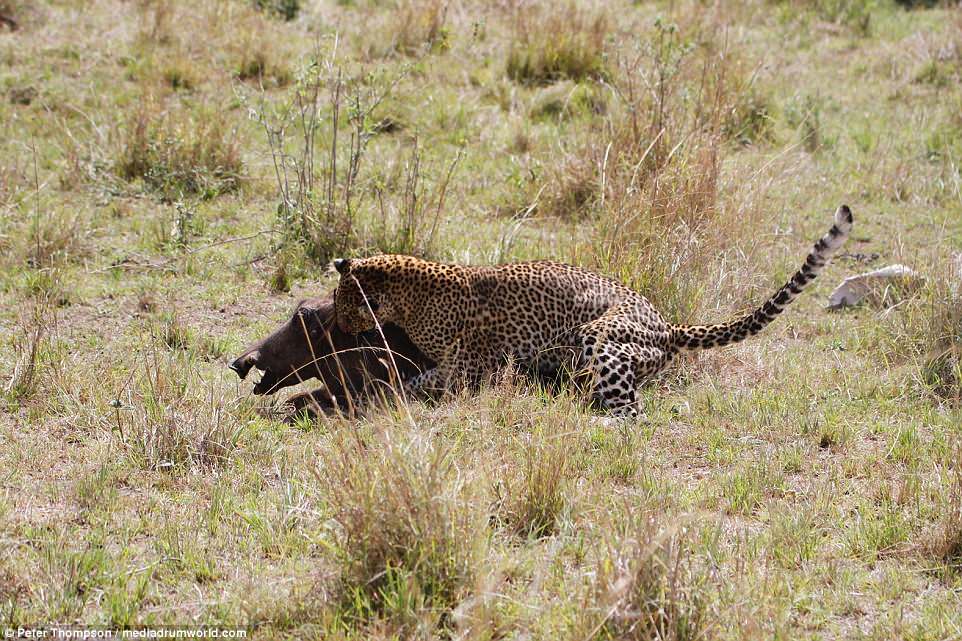 Prisoner: The warthog is trapped under the leopard’s body with no chance of wriggling out 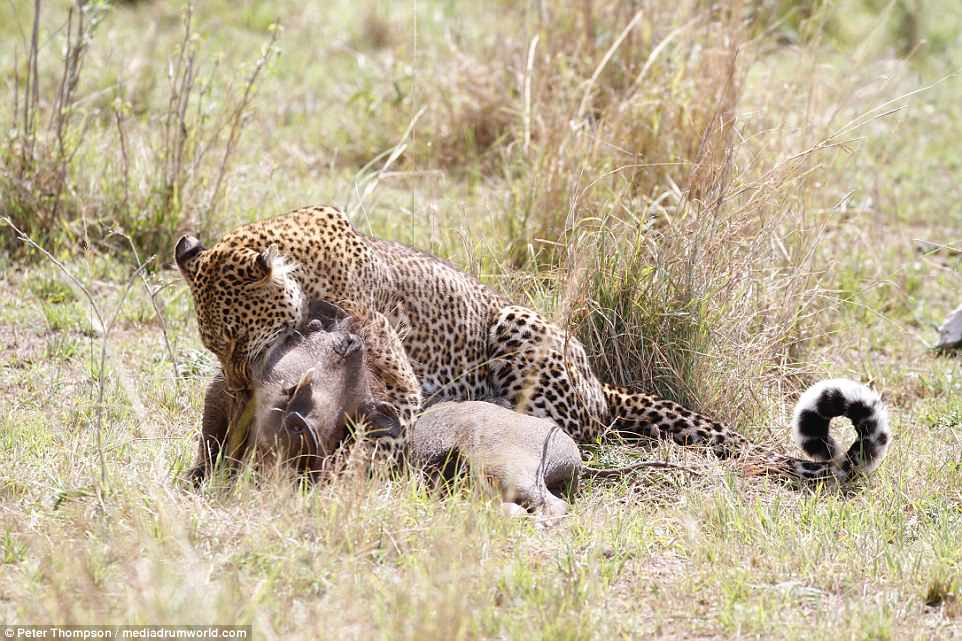 Mission accomplished: After trapping the warthog the leopard begins to eat its hard-earned dinner 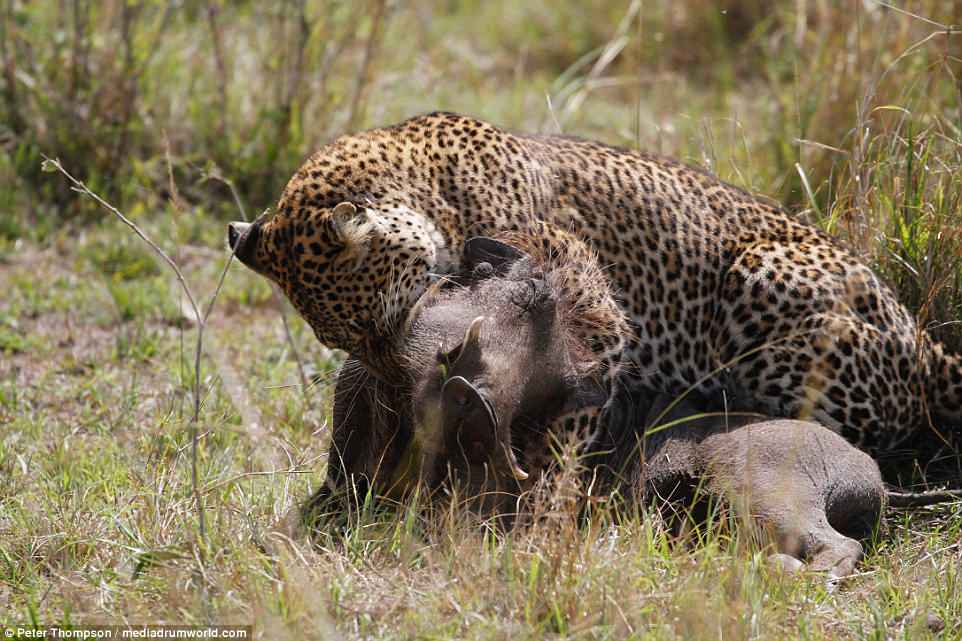 Tucking in: The leopard finishes off the warthog after playing ‘cat and mouse’ for several minutes with the animal 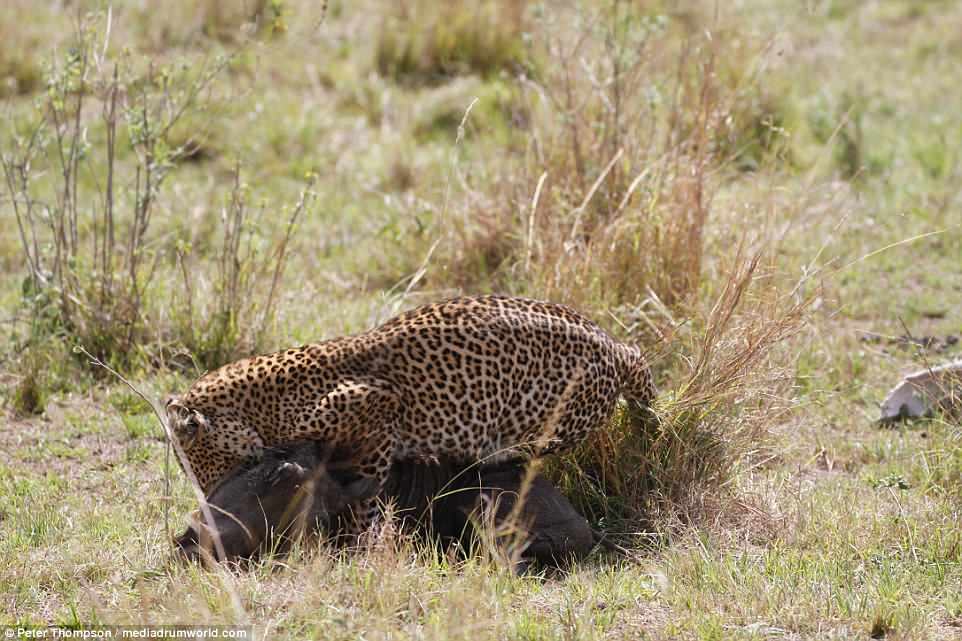 Dinner: The helpless warthog is devoured by the leopard in Maasai Mara National Park, Kenya

The leopard occurs in a wide range in sub-Saharan Africa and parts of Asia and is listed as vulnerable on the IUCN Red List because leopard populations are threatened by habitat loss and fragmentation and are declining in large parts of the global range.

Leopards are active mainly from dusk till dawn and rest for most of the day and for some hours at night in thickets, among rocks or over tree branches.. This makes this encounter extremely rare.

Peter, who used a Canon 7D camera to take the photographs, said most people ask him if the images are fake.

‘The leopard put on a show for us and chased the warthog to the car in near-perfect light,’ he said.

‘I love this type of photography because I think this happens a lot but nobody is around to witness it.

‘Imagine what else happens when no-one is around. You could imagine anything and it could literally happen.’