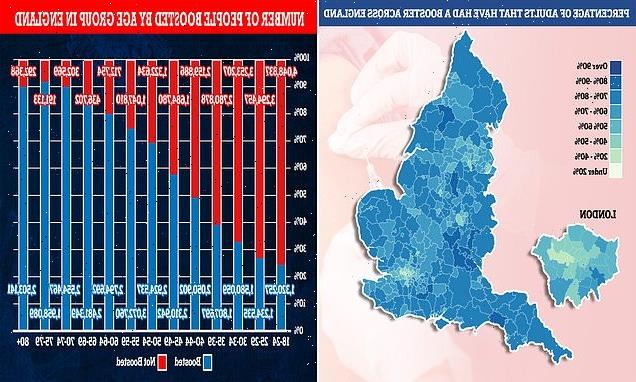 Fewer than a THIRD of adults have already had their Covid booster vaccine in parts of England… and 10 MILLION ‘eligible’ adults have still not got their third dose, figures show

Fewer than a third of adults have still yet to get a Covid booster vaccine in areas lagging most behind in England’s roll-out, MailOnline can reveal.

Uptake sits at just 29.3 per cent in Newham, with rates similarly low in the two other London boroughs of Tower Hamlets and Barking and Dagenham.

Meanwhile, latest NHS statistics show a sixth of the country’s 300-plus authorities have yet to even reach 50 per cent of all over-18s. And even the area doing the best, Hambleton in Yorkshire, has only just tipped the 75 per cent barrier.

Separate analysis suggests around 10million eligible adults have still yet to get a third dose, although many will be ineligible because they caught the virus itself in the past month.

Experts today called on Britons to come forward for their third jabs, saying that it clearly ‘does its job’ in bolstering protection against hospitalisation and death. Ministers say 90 per cent of Covid patients in intensive care are not boosted.

They urged the Government to put out ‘much clearer’ messaging on the benefits of the jab, saying it was hard to convince sceptical people to change their minds if ministers kept saying Omicron was milder.

Yesterday on a visit to a vaccination centre in Northampton, the Prime Minister blamed lower uptake in parts of the country on anti-vaxxers spreading ‘mumbo-jumbo’. Boris Johnson has repeatedly said a successful booster drive is key for keeping restrictions at bay, and promised to offer all over-18s a jab by New Year’s day.

Last week No10 bragged the goal had been hit, but ministers were accused of over-egging the figures and it soon emerged that millions of eligible Britons were still waiting for appointments. Updated official figures show out of 38.9million over-18s who are double-jabbed, only 28.5million have already turned up for their third shot.

Health minister Gillian Keegan yesterday suggested that hundreds of thousands of people could not come forward for jabs because they caught Omicron over the past month. 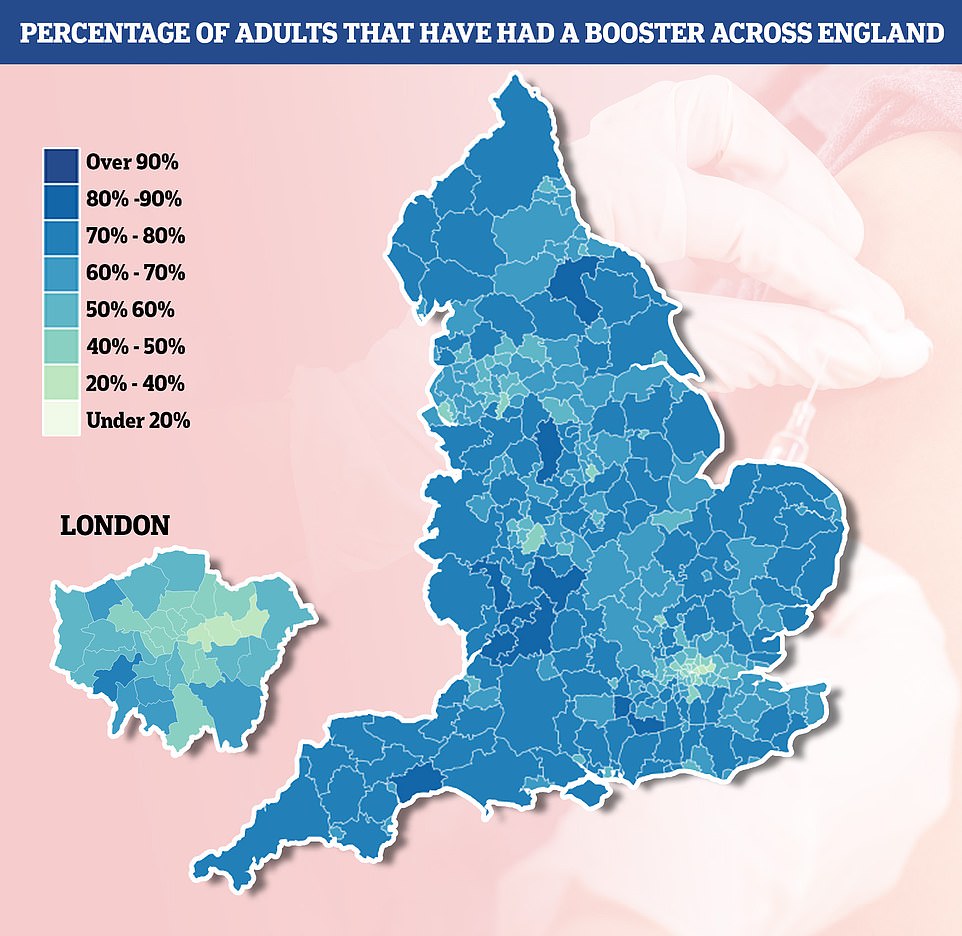 The above map shows vaccine uptake across England’s 300-plus local areas, with darker colours indicating a higher proportion of the population that has got a booter. Uptake is lowest in London 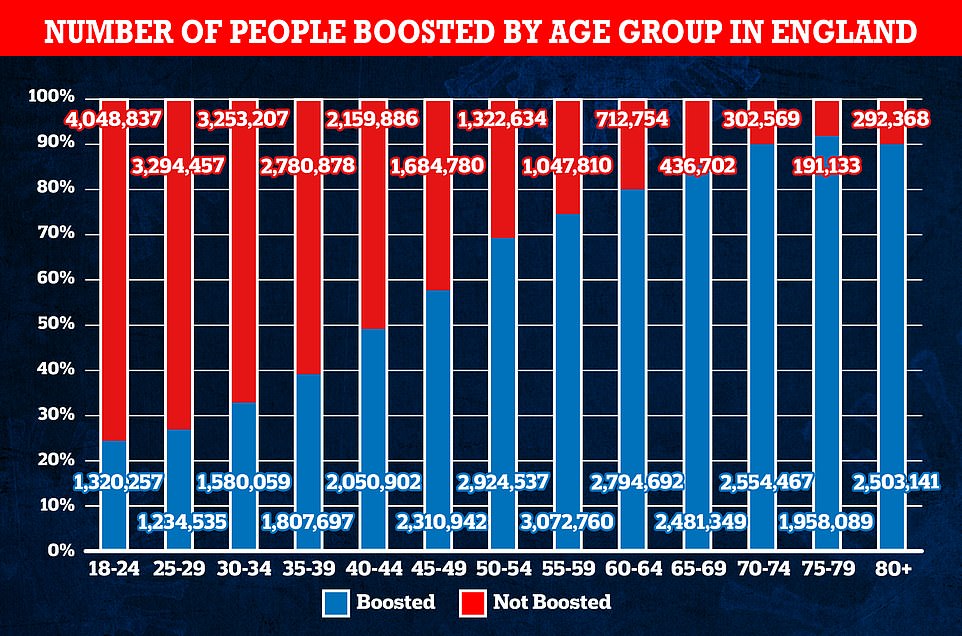 The above shows booster vaccine uptake by each age group’s population. It reveals that uptake has been highest among older age groups who are most at risk to the virus. Britons can only get a booster from three months after their second jab

MailOnline analysis of NHS England statistics for the entire over-18s population shows uptake sits at around 57 per cent.

But rates vary by age group, with 86.4 per cent of over-60s having already got their top-ups.  Nearly 1million still haven’t had their first dose, despite being invited over a year ago because they are at most risk of serious illness or death if they catch the virus.

Nearly four in ten Covid patients in hospitals in England are not primarily being treated for the virus, according to official data that highlights the mildness of Omicron.

NHS figures released today show there were around 13,000 beds occupied by coronavirus sufferers on January 4, of which nearly 4,850 were not mainly sick with the disease.

It means nearly 40 per cent of patients included in the Government’s daily Covid statistics may have been admitted for something else, such as a broken leg.

The share of so-called ‘incidental’ cases was even bigger in Omicron hotspot London, where 45 per cent of ‘Covid patients’ were not primarily in hospital for the virus.

Experts say there is reason to believe that incidentals will continue to rise as the variant pushes England’s infection rates to record highs, with one in 15 people estimated to have had Covid on New Year’s Eve.

In South Africa — ground zero of the Omicron outbreak — up to 60 per cent of Covid patients were not admitted primarily for the virus at the height of the crisis there.

There are growing calls among experts and politicians for the Government to differentiate between people admitted ‘with’ and ‘from’ Covid to assess the real pressure of the virus on the NHS.

The rise in incidental admissions and lack of any real uptick in ICU cases has given Boris Johnson the confidence to ‘ride out’ the Omicron wave without any further restrictions.

MailOnline analysis on Thursday revealed the Covid case fatality rate — the proportion of confirmed infections resulting in death — is now 21 times lower than during the devastating second wave.

And figures are even more stark in some areas, especially London, where all ten areas with the slowest roll-outs are.

Professor Lawrence Young, a virologist at Warwick Medical School, said: ‘I am really surprised that uptake of the boosters is still so low in some areas.

‘We do need much clearer messaging about the benefits of the booster jab. The problem is associated with the fact many people are taking for granted that Omicron is milder than Delta. They think “oh, it’s ok, it’s milder and we don’t have to worry”.

‘[But] the booster does its job, it gives you suped-up immunity which will hopefully last long enough to protect you from Omicron and a number of months into this year.’

He warned the Government to stop ‘dripping out’ figures on the numbers of Covid patients in intensive care who have not got boosters, without backing it up with official data.

Professor Young also called for ministers to make more use of anti-vaxxers who were now pro-jabs following a stay in intensive care, saying real-world stories have the best cut through.

Dr Simon Clarke, a microbiologist at Reading University, said the fact there were areas where two thirds of people hadn’t got the jab had ‘nothing to do with Covid’.

He called on ministers to push out more adverts for vaccines through the TV and radio in areas where uptake was lowest.

Official figures only go up to January 2, meaning the true situation may now be slightly better because more people have been inoculated.

Mr Johnson threw open the drive to all over-18s in early December amid concern over the arrival and rapid spread of the Omicron Covid variant. He said everyone in this age group would be able to get a booster from three months after their second dose.

Over-60s had been able to get their top up doses for months beforehand, but many said they were struggling to secure appointments or access vaccination centres nearby. 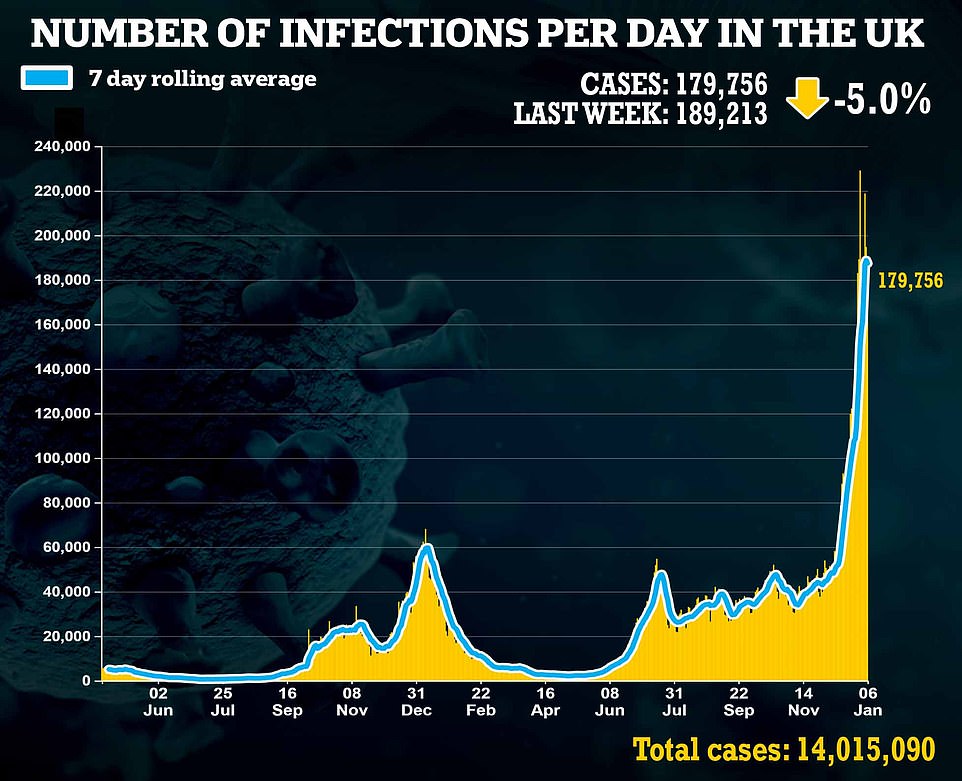 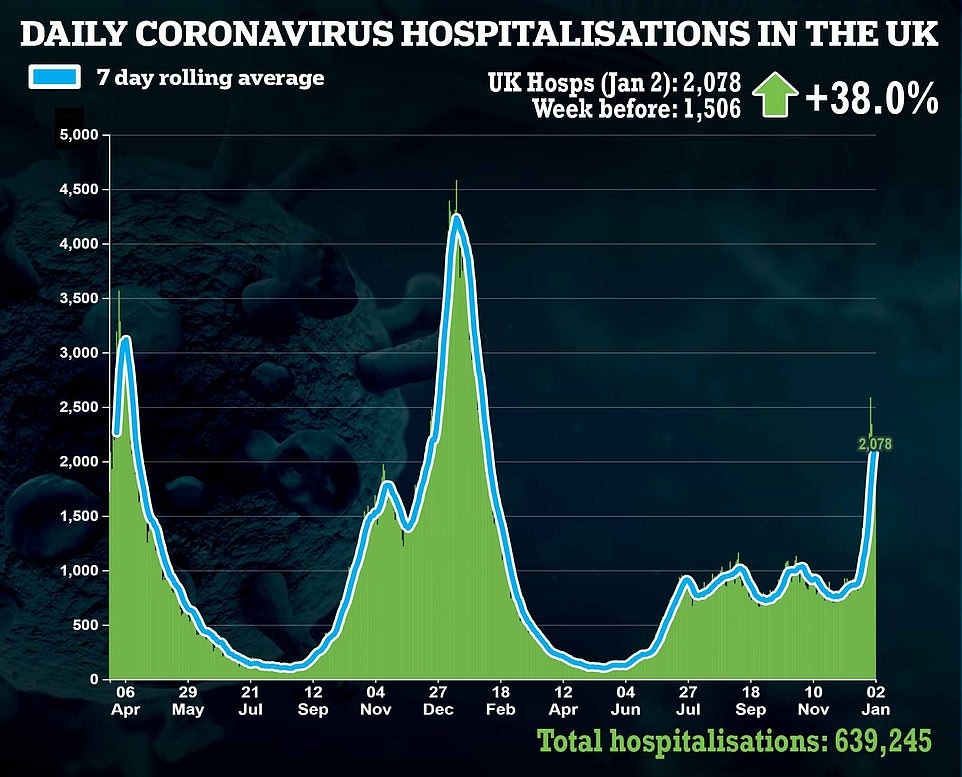 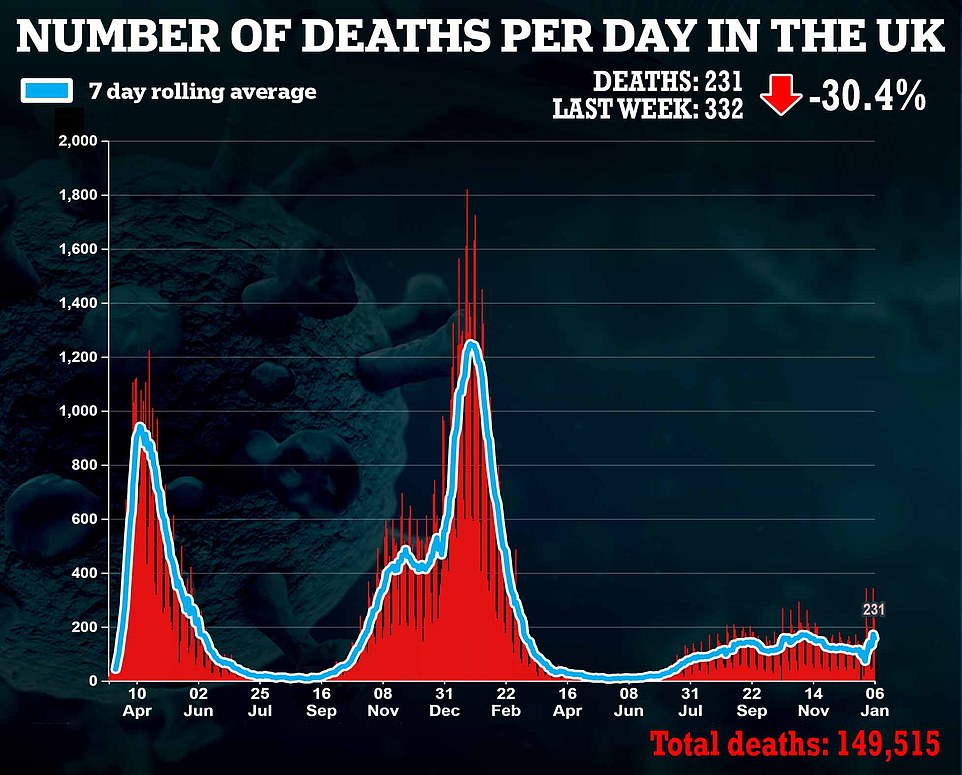 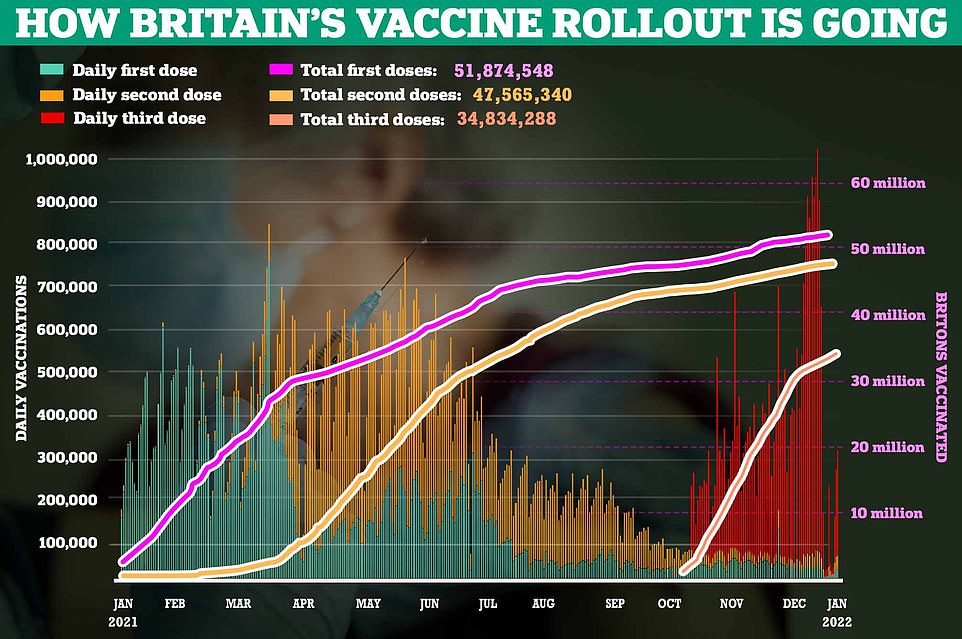 Mr Johnson said yesterday: ‘I want to say to the anti-vax campaigners, the people who are putting this mumbo-jumbo on social media: They are completely wrong.

He added: ‘What a tragedy that we’ve got all this pressure on the NHS, all the difficulties that our doctors and nurses are experiencing, and we’ve got people out there spouting complete nonsense about vaccination.

‘They are totally wrong, and I think it’s time that I, the Government, call them out on what they’re doing.’