Former Trump campaign manager Corey Lewandowski sparks outrage by saying ‘Womp, womp’ on Fox News after panelist describes how a 10-year-old girl with Down syndrome was separated from her mom at the border

Corey Lewandowski has sparked outrage after he mocked a story regarding a 10-year-old disabled girl who was separated from her mom at the border.

‘I read today about a 10-year-old girl with Down syndrome who was taken from her mother and put in a cage…’ Petkanas began.

But before he could finish, Lewandowski merely replied: ‘Womp, womp’. 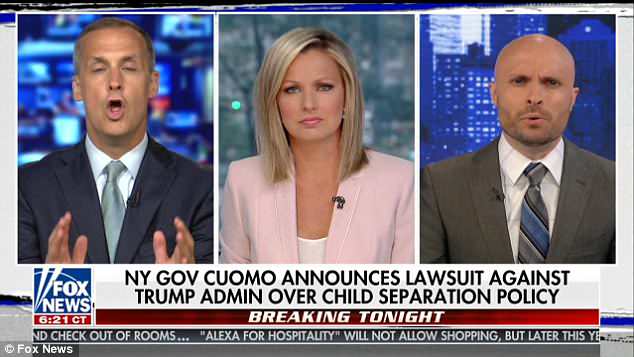 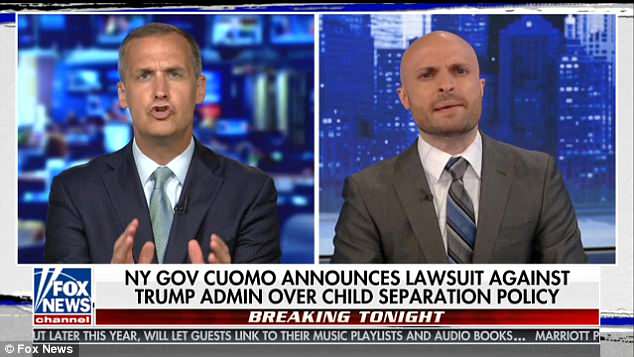 ‘Did you just say “Womp, womp” to a 10-year-old girl with down syndrome being separated from her mother?; Petkanas asked, clearly disgusted.

‘How dare you, how absolutely dare you sir, how dare you…’

Lewandowski tried to talk over Petkanas, saying: ‘What I said is you can pick anything you want, the bottom line is clear.’

The clip was quickly shared on Twitter by multiple outlets, and many high-profile figures didn’t hold back to share their anger with the Fox News commentator. 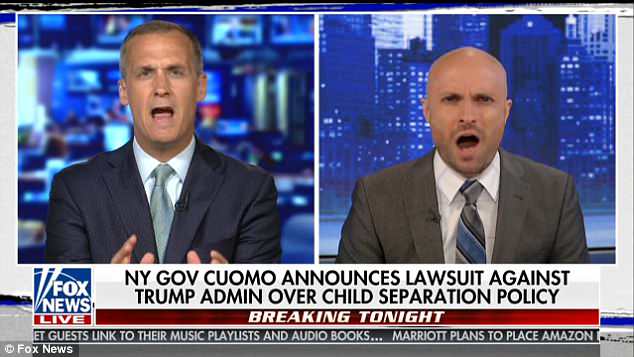 ‘Did you just say “Womp, womp” to a 10-year-old girl with down syndrome being separated from her mother?; Petkanas asked, clearly disgusted

‘There is no low to which this coward Corey Lewandowski won’t sink,’ Megyn Kelly tweeted.

‘This man should not be afforded a national platform to spew his hate.’

Meghan McCain called the clip ‘so horrible, even by Lewandowski standards’.

Columnist John Podhoretz wrote: ‘Womp womp will be the sound Corey Lewandowski’s soul makes as it descends to Hell.’

‘I hope there is a hell just for Corey Lewandowski,’ added Julia Wick.

Actress Mary McCormack‏ also chimed in, asking: ‘What have we become?’

‘Corey Lewandowski MOCKED a ten yr. old with Down Syndrome who was taken from her mother,’ she wrote.

The clip was quickly shared on Twitter by multiple outlets, and many high-profile figures didn’t hold back to share their anger – including former Fox News host Megyn Kelly

John McCain’s daughter Meghan also chimed in, saying the clip was ‘so horrible, even by Lewandowski standards’

‘Talk about a special place in hell. Where is the @gop? Retweet this until they’re forced to look at themselves.’

‘Corey Lewandowski is simply doing as our president does: making fun of those who can’t defend themselves,’ added Nick Campanella.

The Fox News host was discussing Donald Trump’s policy to separate immigrant children from their parents when she made the controversial comment on Monday.

‘As more illegal immigrants are rushing the border, more kids are being separated from their parents,’ she said on The Ingraham Angle.

‘And temporarily housed at what are, essentially, summer camps.’

Ingraham’s words horrified many after pictures were released showing immigrant children lined up in a series of cages created by metal fencing at detention centers.

The host then tried to backtrack on those statements towards the end of the show, responding to the backlash on social media in real time. 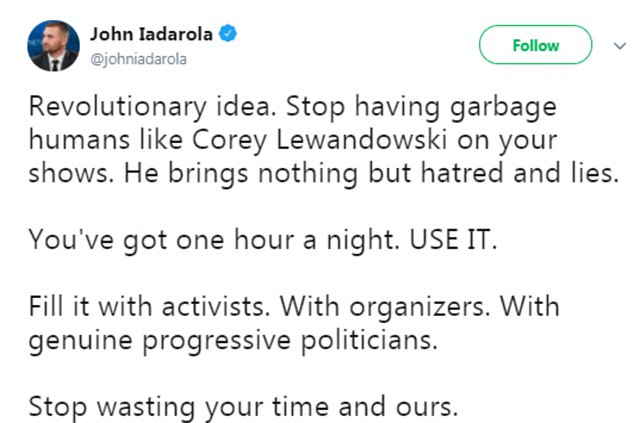 ‘Apparently there are a lot of people very upset because we referred to some of the detention facilities tonight as essentially like summer camps,’ said Ingraham.

‘The San Diego Union Tribune today described the facilities as essentially like what you would expect at a boarding school. So I will stick to there are some of them like boarding schools.’

Fox News has since released a separate statement regarding the controversy, saying Ingraham’s ‘very personal, on-the-ground commitment to the plight of impoverished and abandoned children speaks for itself’.

‘So too does her strong belief in a commonsense, legal immigration system, which will continue to be a focus of her show,’ she added. 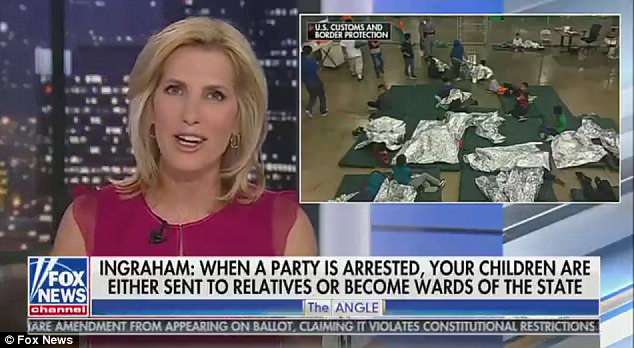 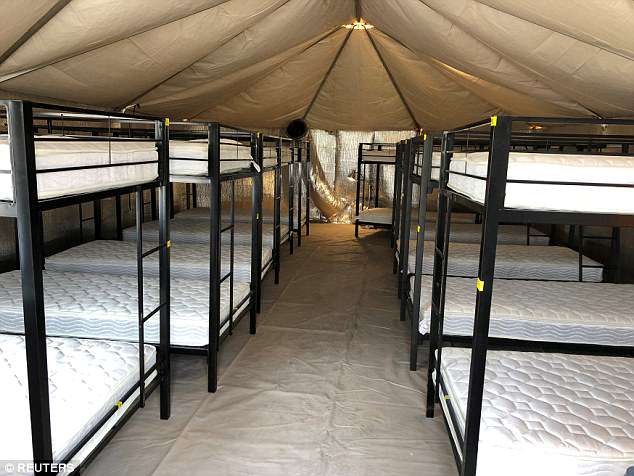 The inside of a dormitory at the Tornillo facility, a shelter for children of detained migrants, is seen in this photo provided by the US Department of Health and Human Services, in Texas 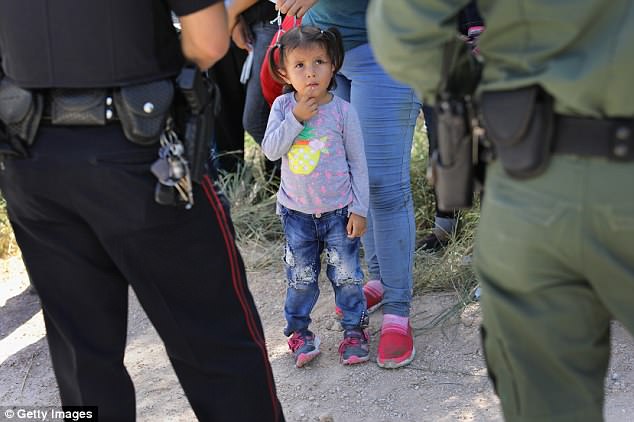 A Mission Police Deptartment officer, and a US Border Patrol agent watch over a group of Central American asylum seekers before taking them into custody in McAllen, Texas

‘FOX News will never tolerate or give in to attempts to silence diverse viewpoints by agenda-driven intimidation efforts.’

Many on Twitter expressed outrage at Ingraham’s claims, including Parkland survivor Dave Hogg – a frequent critic of the Fox News host.

‘Laura Ingraham, like Tucker Carlson and Sean Hannity, would happily defend genocide if the Trump administration asked them to do so,’ he wrote.

Many commenters expressed confusion at Ingraham’s vision for summer camps.

Many on Twitter expressed outrage at Ingraham’s claims, including Parkland survivor Dave Hogg – a frequent critic of the Fox News host 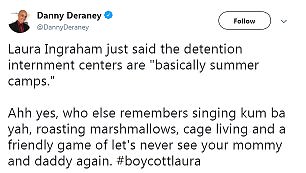 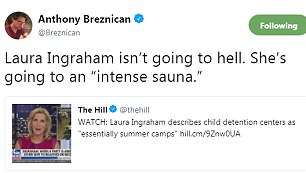 Another joked about what a summer camp would look like if it was run by Ingraham.

‘Your child will learn how to properly fold a foil emergency blanket and how to decorate the inside of a cage,’ JD Durkin quipped.

Others called on the public to boycott Ingraham, while some challenged the Fox News host to send her own children to the detention centers. 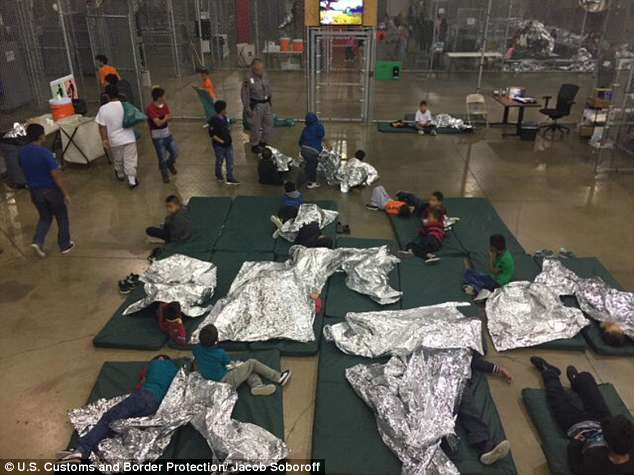 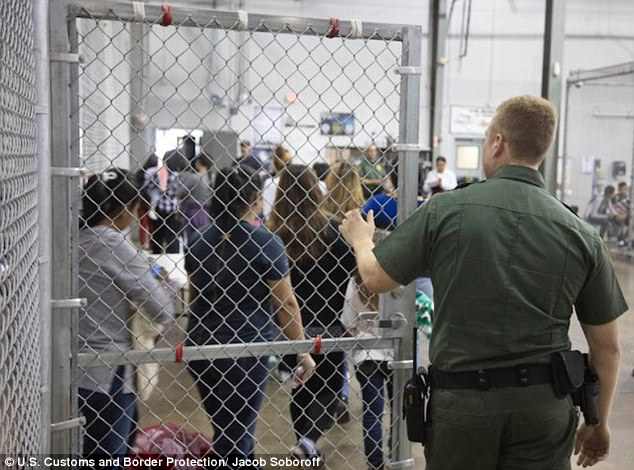 Anne Chandler, the director of the Houston office of Tahirih Justice Center said she’s spoken with several parents who said they were told their children were going to get a bath before they were separated

In May, Attorney General Jeff Sessions announced a ‘zero tolerance’ policy in which all those apprehended entering the US illegally, including those seeking asylum, would be criminally charged, which generally leads to children being separated from their parents.

On Friday, it was revealed that nearly 2,000 children were separated from adults at the border between mid-April and the end of May.

Those children are now living in detention centers along the US-Mexico border. 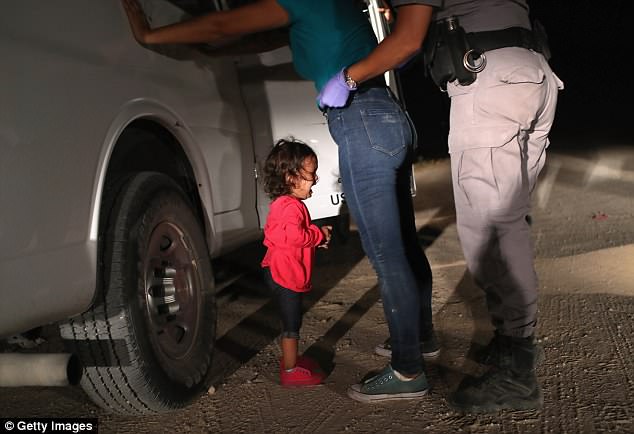 A two-year-old Honduran cries as her mother is searched and detained near the US-Mexico border on June 12. She had illegally crossed the Rio Grande on a raft to reach Texas

Trump’s policy has drawn condemnation from medical professionals, religious leaders, and immigration activists, who warn that some children could suffer lasting psychological trauma.

It has since been revealed that Trump administration officials are sending babies and other young children forcibly separated from their parents to at least three ‘tender age’ shelters in South Texas.

The government also plans to open a fourth shelter to house hundreds of young migrant children in Houston, where city leaders denounced the move Tuesday.

Meanwhile, NBC has reported that a new desert tent city is reportedly preparing for more than 4,000 children and plans to house 20 to a tent.