The Liberal Democrats have threatened ITV with legal action after their leader Jo Swinson was snubbed from the broadcaster’s election debate.

The anti-Brexit party claims it is suing the TV channel after officials failed to invite her to take part.

ITV’s debate will only feature Prime Minster Boris Johnson and Labour leader Jeremy Corbyn when it is aired on November 19.

The Lib Dems branded the move ‘sexist’ and objected to zero female representation on the debate panel. 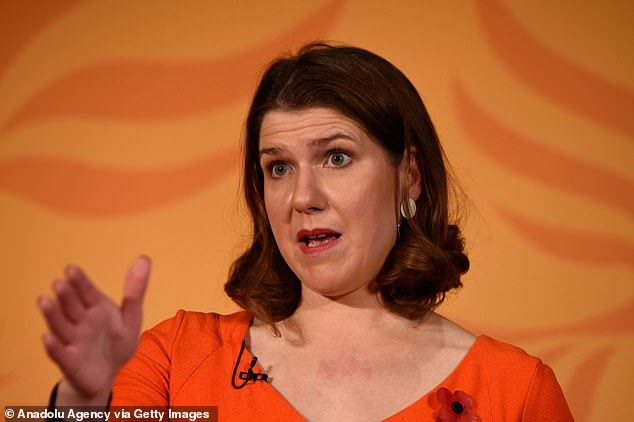 A party spokesman wrote on Twitter: ‘We are taking legal action against ITV for their outrageous decision to exclude Jo Swinson, the strongest voice for millions of Remainers across the country, from their TV debates. Add your name if you think Corbyn and Johnson must #DebateHer’

The Lib Dems currently have 21 MPs, eight of which joined recently after defecting from Labour or the Conservative Party.  The party says ITV’s decision is ‘unlawful’.

ITV told the BBC it intends to offer viewers ‘balanced coverage’ of the election on December 12.

Sky News is planning a three-way debate between Mr Johnson, Mr Corbyn and Ms Swinson, but ITV’s will only feature the two main leaders.

SNP leader Nicola Sturgeon is also threatening legal action over ITV and Sky News’s decisions to exclude her from their televised debates. 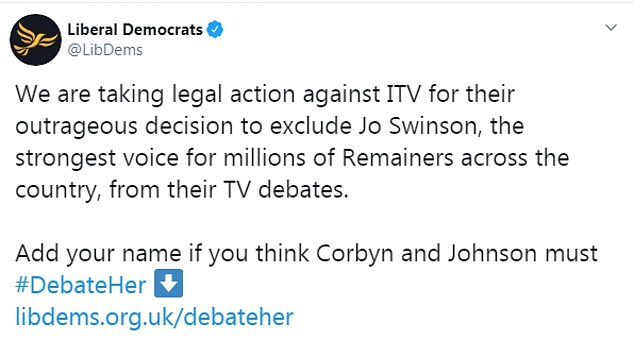