The Liberals and Conservatives are in a virtual dead heat nationally among decided voters just as the government prepares to unveil what it has vowed will be an “ambitious” throne speech on Wednesday.

Neither, however, appear to be in majority territory.

A poll done by Ipsos exclusively for Global News asked 1,000 Canadians over the 18 of age to weigh in on questions posed about their voting intentions and preferences.

According to the responses, 33 per cent of decided voters say they would vote Liberal while 32 per cent said the same for the Conservatives if an election were held tomorrow. Twenty per cent would vote for the NDP with eight per cent for the Greens and six per cent going to the Bloc Québécois.

As well, a single-digit lead in Ontario for the Liberals over the Conservatives suggests if an election were held tomorrow, Canadians could see another minority government sent to Ottawa.

Liberals hold 40 per cent support in Ontario ahead of the Conservatives at 32 per cent — an eight-point lead.

In Quebec, they are also within single-digit margins of the Bloc Québécois.

Support for the Liberals stands at 32 per cent over the Bloc Québécois’ 28 per cent, and the Conservatives sit two points ahead of the NDP at 17 per cent.

Both provinces are major determinants in which party forms government because of their many seats, and a party looking for a majority must secure strong gains in both in order to do so.

Bricker said he would be surprised if the Liberals called an election without a double-digit lead in Ontario and without national support numbers closer to the 40 per cent range. 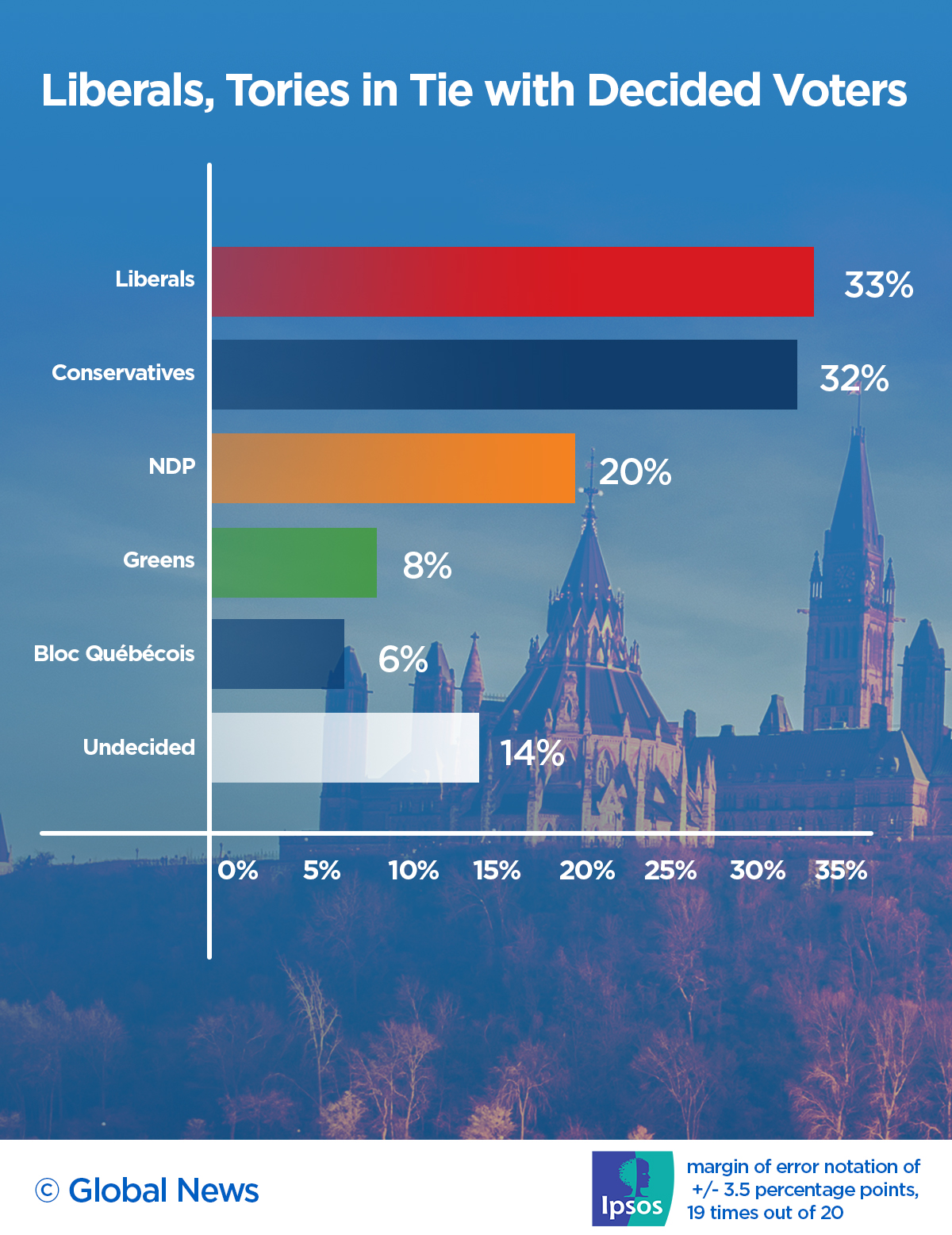 At the same time, 53 per cent of Canadians continue to approve of the government’s performance.

Bricker said that while the results suggest the Liberals may have an advantage, it is likely not as comfortable as they may want in order to send Canadians back to the polls right now.

This Ipsos poll was conducted between Sept. 11 and 14, 2020, on behalf of Global News. For this survey, a sample of 1,000 Canadians aged 18+ was interviewed online. Quotas and weighting were employed to ensure that the sample’s composition reflects that of the Canadian population according to census parameters. The precision of Ipsos online polls is measured using a credibility interval. In this case, the poll is accurate to within ± 3.5 percentage points, 19 times out of 20, had all Canadians aged 18+ been polled.