TRIPOLI/PARIS (Reuters) – Military strongman Khalifa Haftar’s intended lightning seizure of Libya’s capital has stalled, but he is unlikely to face real pressure from abroad to pull back as the arrival of hardline opponents bolsters his war cry against “terrorism”. 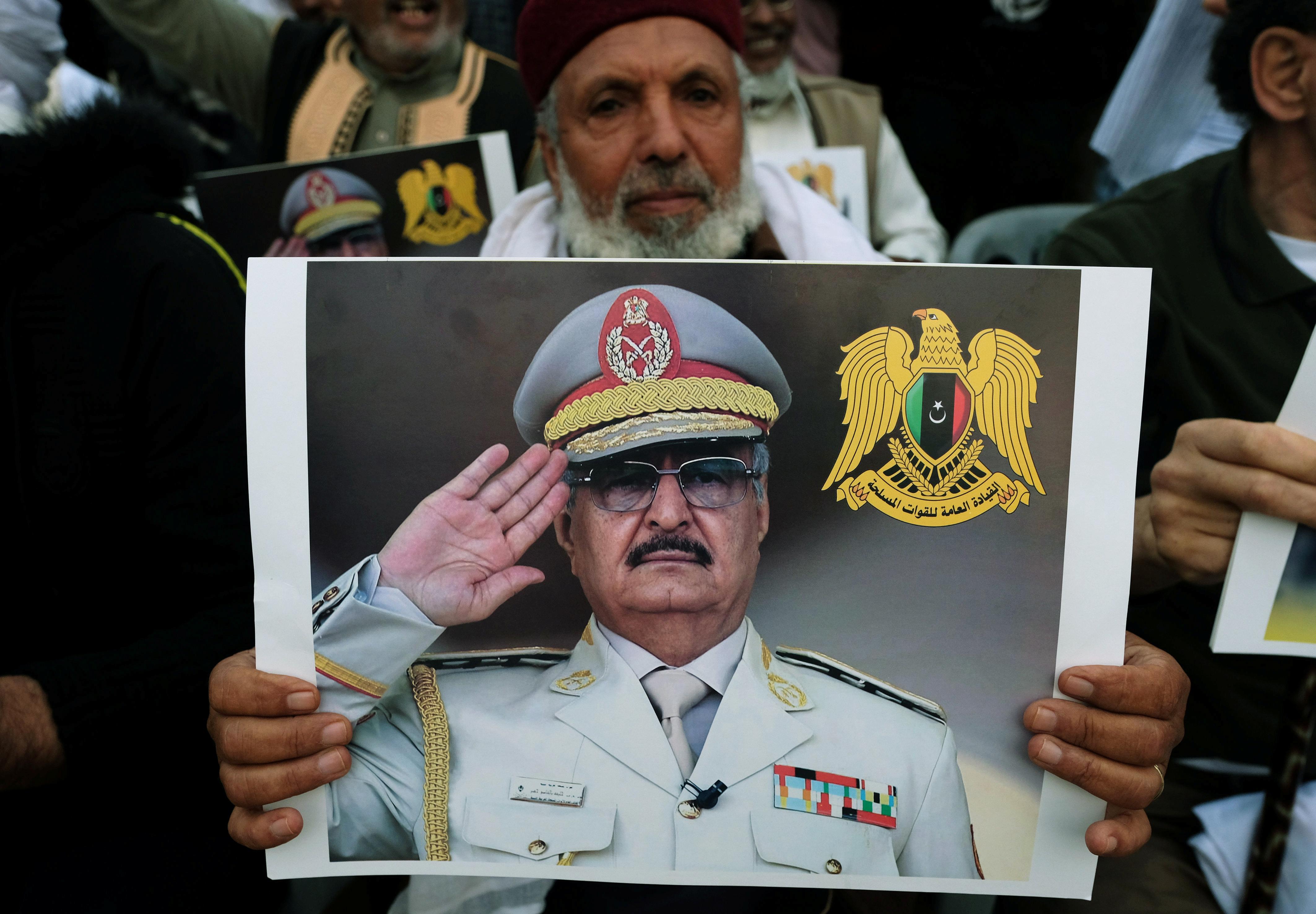 However, the internationally-recognized government of Prime Minister Fayez al-Serraj has managed to bog them down in southern suburbs, thanks largely to armed groups who have rushed to aid them from various western Libyan factions.

And instead of ululating, many women in fact joined a rally on Friday in Tripoli against the offensive.

Haftar, a 75-year-old former general in former dictator Muammar Gaddafi’s army, has been building up troop numbers and intensifying air strikes in a campaign he is selling as necessary to restore order and eradicate jihadists.

That, however, is uniting Haftar’s enemies behind Serraj, who lacks regular forces and needs help, but may find them difficult to control the longer the war drags on, analysts say.

Renewed conflict has scuppered for now a U.N. peace plan for Libya, with a national reconciliation conference planned for this week postponed. It also threatens to disrupt oil supplies from the OPEC member and cause new migration across the sea to Europe.

Diplomats believe Haftar for now will face no pressure from backers including the United Arab Emirates, Egypt and France, who still see him as the best bet to end the chaos and divisions since the ousting of Gaddafi in 2011.

Their case, which undermines calls by former colonial ruler Italy and others for a political solution, is aided by the arrival of militants in recent days to help Serraj’s forces.

One of them is Salah Badi, a commander from nearby Misrata port who has Islamist ties and possible ambitions himself to take Tripoli. In videos from the front line, Badi has been seen directing men as well as a U.N.-sanctioned people trafficker.

Some hardcore Islamists, previously affiliated to Ansar Sharia, have also popped up in the fighting, according to the videos. That group was blamed by Washington for the 2012 storming of a U.S. diplomatic compound in Benghazi that killed the ambassador and three other Americans.France, which has oil assets in Libya though less than Italy, has called for a ceasefire – albeit more reluctantly than Rome – while also echoing Haftar’s narrative that some extremists were among the Tripoli defenders.

“There is an oversimplification. It is not just Haftar the baddy against the goodies in Tripoli and Misrata. There are groups that are at the end of the day allied to al Qaeda on the other side,” said a French diplomatic source.

“Perhaps if those opposed to Haftar had done a deal with him in 2017, the balance of power would not have shifted against them,” the source said, referring to when France brought Haftar and Serraj together for face-to-face talks in Paris.

Serraj’s government has sought to downplay the presence of hardliners. “On both sides there are members accused of being violators,” Mohamed Siyala, his foreign minister, told reporters.

Haftar’s own troops are swelled by an estimated hundreds of Salafist Islamists, and one of his commanders is wanted by the International Criminal Court over the alleged summary execution of dozens of people in the eastern city of Benghazi.

It was there that Haftar in 2014 launched his “Operation Dignity” campaign, naming his forces an “army” to try and distinguish from “militias” elsewhere.

He won the Benghazi battle against mainly Islamists in 2017 with covert support from the UAE, Egypt and France, but some of his defeated foes are now in Tripoli seeking revenge.

Neighboring Egypt’s President Abdel-Fattah al-Sisi met Haftar at the weekend in Cairo and in a statement “confirmed Egypt’s support for efforts to combat terrorism.”

Wolfram Lacher, a researcher at German think tank SWP, said there was exaggeration of the presence of militants in Tripoli for propaganda purposes.

“These elements are a tiny minority of the forces that are fighting against Haftar right now, but this could become a self-fulfilling prophecy the longer this goes on,” he said.

In the past, the UAE and Egypt have supported Haftar with air strikes in eastern Libya, but it is unclear whether they would do so in the current campaign, diplomats and analysts say.

For Paris, Haftar, or a perceived stable army in Tripoli, is key to its wider policy against militants in the Sahel.

France has some 4,500 troops in the deserts to the south and west of Libya, and wants to ensure the porous borders are locked as tightly as possible. Its support of Haftar will depend on whether it thinks he can win or how much civilian casualties can be contained.

Should those escalate and refugee numbers swell, then it may be forced to be more proactive in pressuring Haftar.

It will also depend on how UAE support evolves.

France has listened increasingly closely to Abu Dhabi Crown Prince Mohammed bin Zayed’s views on Libya since President Emmanuel Macron came to power. An internal policy battle in France between the foreign and defense ministries prior to his arrival had until then blurred Paris’ lines.

“While France is keen to project its Libya policy as a home-grown policy, in reality France merely follows the UAE — more or less,” said Jalel Harchaoui, research fellow at the Clingendael Institute think-tank in The Hague.

“What this means today is: Unless MBZ decides that Haftar has blown his chance and failed irretrievably, Emmanuel Macron is unlikely to alter or subdue his pro-Haftar policy in Libya.”