‘We NEVER leave anybody out there’: Libyan coastguards DENY migrant rescue group’s claim they left a woman and toddler to drown, and insist: ‘Every soul we save is a celebration’

Libya’s coastguard has denied claims by a migrant aid group that they had left two women and a toddler to die in the Mediterranean Sea.

Commander Boujaila Abdel Barri, the head of coastguard operations trained by Britain’s Royal Marines, said they had in fact resuscitated a child and his mother.

He said they rescued all 165 migrants on a rubber dinghy after they got a call from the Italian authorities who spotted them after they had been at sea for three days.

Speaking at a naval base in Tripoli, Libya, he said: ‘We would never go out to rescue someone and then abandon them.’

On Tuesday, a migrant aid group accused Libya’s coast guard of abandoning the three migrants near the shores of the North African nation. Proactiva Open Arms, a Spanish rescue group, said it found one woman alive on Tuesday and another dead, along with the body of a toddler. 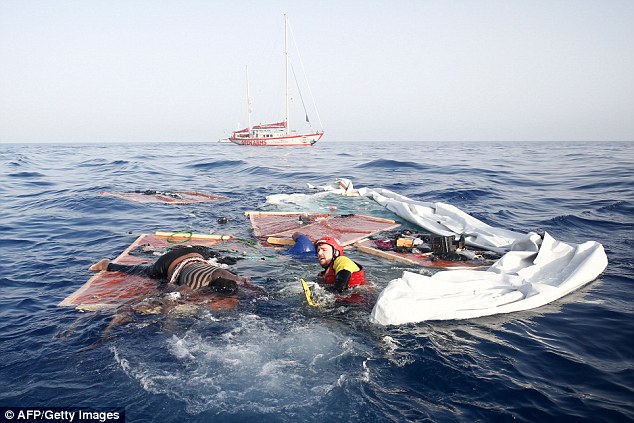 Libya’s coastguard has denied claims by a migrant aid group that they had left two women and a toddler to die in the Mediterranean Sea. A woman and a child were found dead 80 miles from the coast of Libya while one woman was found alive. This was the scene as rescuers reached the wreckage 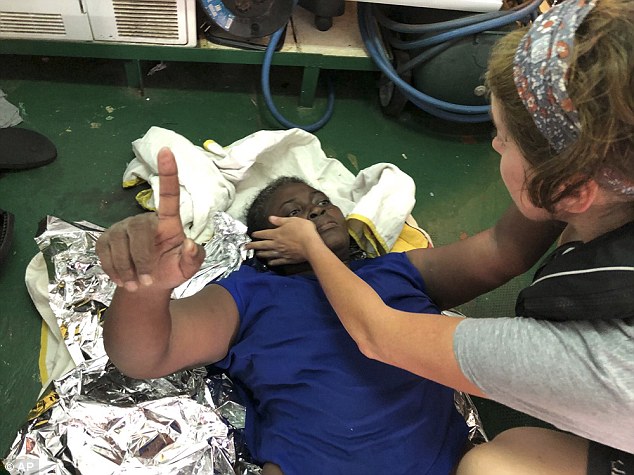 The Cameroonian woman named Josepha was found alive in the Mediterranean, around 80 miles off Libya according to a Spanish charity

Photographs showed them drifting among the remains of a destroyed migrant boat 80 nautical miles from the Libyan coast.

The survivor said she was called Josepha, was 40 years old and came from the West African state of Cameroon. The charity claimed that the Libyans had left the scene when the three declined to board their patrol ship.

But Ayoub Qasim, official spokesperson for the general command of the Libya Navy, said he had no idea what the NGO was referring to. He said it must have been a different boat that they had not come across.

He said: ‘The only reason we go out to sea is to rescue people, we would never leave anybody out there.’

Abdallah Omar Toumia, head of the coastguard, added: ‘This is absolutely not true. ‘We never in any of our rescue operations could have saved somebody and left them behind. This is false fabrication.’

He went on: ‘As coastguards, every time we are able to rescue one soul it is a day of celebration for us. When we lose one soul it affects us.’

He said he had begun to lose faith in European NGOs because he claimed they had ‘spread false information to drum up their own agenda.’

The two naval chiefs said that NGOs were thwarting their rescue attempts by sending boats out just miles away from where migrants were taking off. 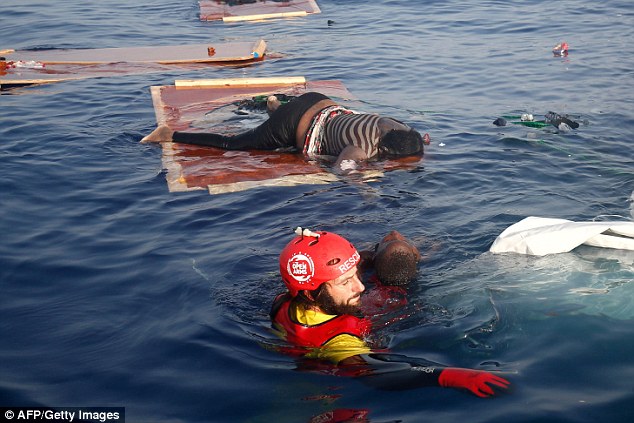 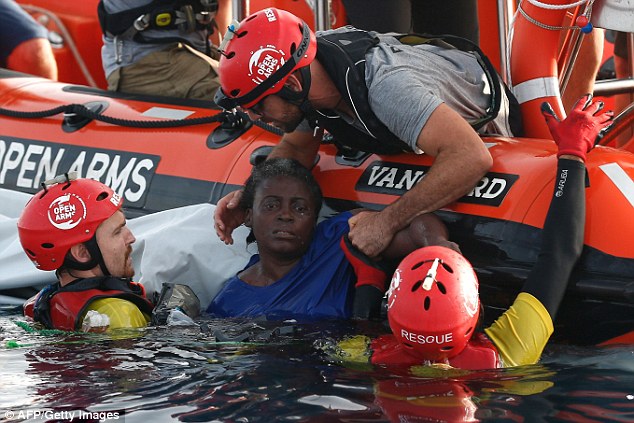 In one instance, they said an NGO had interrupted their rescue mission so migrants started swimming away from the Libyan ship to get on a boat bound for Europe.

Mr Barri, who oversaw the mission on Monday, said the wreckage the Ngo had referred to must have been from an entirely different boat.

He said they had received a call about 5pm on Monday telling them there was a rubber dinghy about 80 nautical miles from the Libyan coastline.

He said: ‘When we carried out this rescue operation, it was night-time, and even though we didn’t have all the resources at our disposal, we were able to carry out the rescue operation with total success.

‘We ended up rescuing about 165 people, from amongst those we rescued there was a woman who was carrying a baby and the baby was dead in her arms.

‘We rescued the woman and we brought back the dead baby as well.’

He said they had been out lost at sea for three days and so the migrants were in a bad state.

He added: ‘From the 165 we rescued, two of them we had to resuscitate and we were able to revive them, thank God. 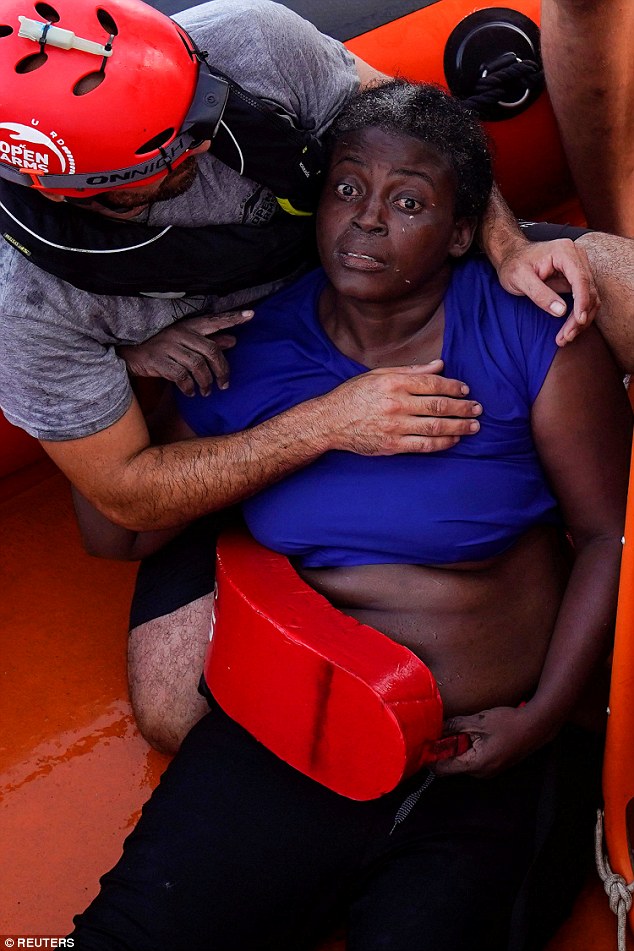 Josepha needed urgent medical attention. The woman survived two days at sea after being abandoned by the Libyan Coastguard, she said 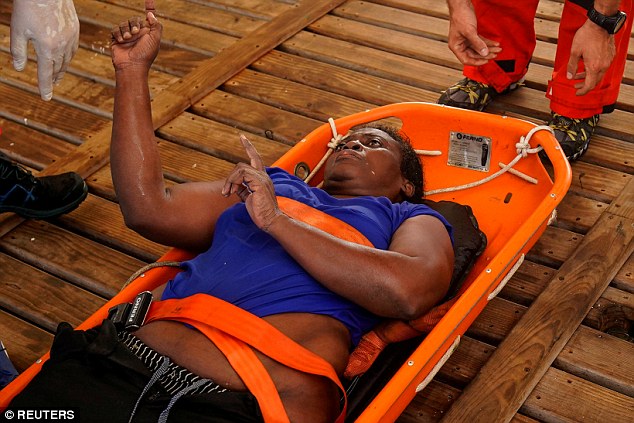 Ayoub Qasim, official spokesperson for the general command of the Libya Navy, said he had no idea what the NGO was referring to. He said it must have been a different boat that they had not come across

‘The paramedic who was with us was able to resuscitate them back to life. It was a woman and a child, and this took place on our vessel itself.’

He stressed that no one had been left behind in the mission, which was observed by a television crew from Germany.

Yesterday, Spanish NGO Proactiva Open Arm claimed that Italy had refused to accept the dead bodies. Italy did, however, offer to accept the survivor, Proactiva said, adding that they refused the offer.

The sea rescue charity founded by veteran lifeguard Oscar Camps has rescued tens of thousands of migrants from the Mediterranean since they began operations there in 2016.

However, Malta and Italy have recently opted to seal ports and refused to take would-be refugees from Libya, even accusing the charity of ‘trafficking’.

The Mediterranean between Libya and Italy is known as the ‘deadliest border on earth’.