Konstantinivka: Ukrainian soldier Vitaly hasn’t taken his Australian Bushmaster troop carrier back to the frontline for two weeks. He can’t.

Five of his comrades were captured by the Russians in the open green fields of the sprawling Donbas region of eastern Ukraine before he and his gunner could evacuate them.

Vitaly, who drives the four-wheel-drive armoured vehicle, is now waiting on more men to shuttle back to the battlefront. Two men are required to operate the Bushmaster – the driver and the gunner – allowing it to transport five soldiers to and from the action. 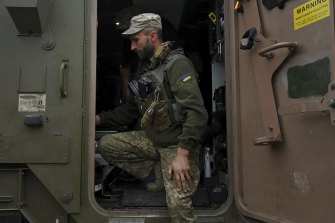 Vitaly waits for fresh troops to shuttle to the frontline in the Bendigo-made armoured carrier. Credit:Kate Geraghty

Speaking from a secret location in eastern Ukraine, a dozen kilometres from the front line, Vitaly remembers the day he lost his team.

When the five soldiers in his unit came under heavy Russian fire in the fields, Vitaly and the gunner Stepan set off in the Bendigo-made Bushmaster to rescue them. But just as they got close, they lost all communications. The five soldiers were captured, their fate now in Russia’s hands.

“I now don’t have the team to man the vehicle. My team has been captured, taken prisoner by the Russians. Only Stepan and I are left,” Vitaly, 42, says.

Vitaly, left, and his gunner, Stepan, right, are the only members of their unit that were not captured by the Russians. Credit:Kate Geraghty

As Vitaly speaks to us, a Motanka doll – a traditional Ukrainian good-luck charm – hangs from above on the front windscreen. On the side of the vehicle, a painted-on kangaroo almost kisses the Ukrainian flag with the words: “UNITED WITH UKRAINE”.

The Bushmasters, designed by Thales Australia for the Australian Army in the late 1990s, proved indispensable in Iraq and Afghanistan as the primary troop carrier. They are now proving their worth in the Donbas, under heavy bombardment from Russian artillery shelling, missiles and airstrikes. 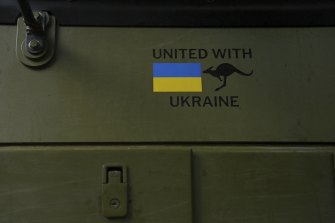 A kangaroo mascot alongside the Ukrainian flag on the carrier. Credit:Kate Geraghty

The armoured vehicles, painted olive green, are geared like a truck, but they move nimbly through all terrains, off-road and on-road, transporting troops to and from the frontline.

Within one hour last week, we saw three of them racing to frontline positions near Sievierodonetsk, the focus of Russia’s onslaught in the east. In what is shaping as a long and brutal war, Russia is, centimetre-by-centimetre, making advances in the Donbas region. It has now taken most of the ruined factory city and Ukrainian soldiers are pinned down in the industrial area of what was once a major population centre.

From their positions in the occupied streets, Russians batter the sister city of Lyshychansk, just across the Siverskyi Donets river, with artillery shells and missiles.

Ukrainian and US defence officials estimate that between 100 and 200 Ukrainian soldiers are dying every day across the country, while thousands more are wounded and captured.

The war has also cost Moscow dearly, with NATO last month estimating the Russian military death toll at 15,000 or more.

The soldiers here say they want more Bushmasters, as well as howitzers, tanks and long-range missiles.

Vitaly says the Bushmaster is “a lot better” than Ukraine’s Soviet-era BTR vehicles.

“First of all, it’s very comfortable. It has air-conditioning, it’s like a house on wheels. I would have lived inside. I stay in it all the time,” Vitaly says. 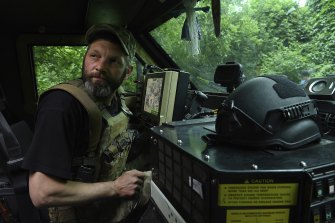 A montanka doll, a good luck charm, hangs from the windscreen of the Bushmaster. Credit:Kate Geraghty

Ukraine now only has 19 Bushmasters, after one was taken out by the Russians in an attack near the village of Trypillia. Vitaly, who was close to the attack when it happened, says everyone survived.

“I was there, I saw that Bushmaster go in for the first time, bring the guys back and then go in a second time. And then it got hit,” Vitaly says.

The commander of the team, who goes by the nickname Technik, says the attack demonstrated the quality of the Australian vehicle because it protected all the men inside.

“It’s armoured inside and that’s a big plus for this vehicle because it protects the safety and the health of the soldiers inside,” he says. “If we had more vehicles like this, we would save more lives – and the lives of our soldiers are the most important thing.” 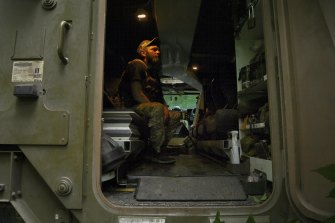 Bushmasters are armoured inside and out to withstand attacks. Credit:Kate Geraghty

Technik says it only took his team between two and three days to “master the Bushmaster”.

He says he is waiting on Australia to send more of them.

“We need the Bushmasters for those units that are responsible for internal safety,” he says.

Technik says Ukraine needs many more vehicles and weapons from countries like Australia to replenish its capabilities.