Created by The New York Times 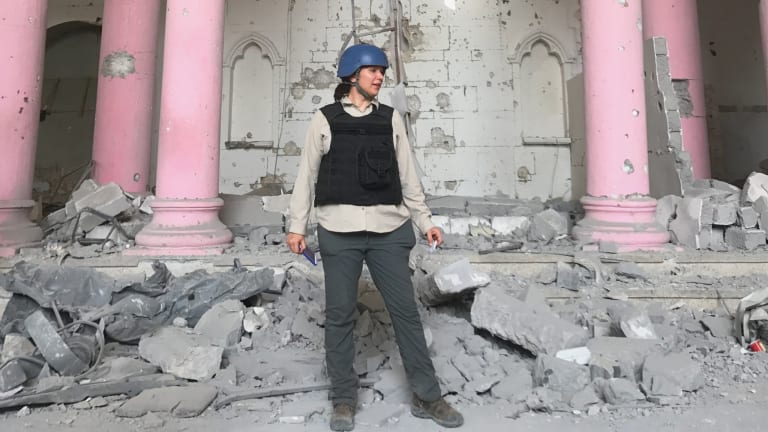 Rukmini Callimachi, who has covered al-Qaeda and IS since 2014, seems as unflappable as you’d expect of someone who is in daily contact with terrorists.

Rukmini Callimachi, a reporter for The New York Times, doesn't escape the online vitriol that is so often directed at female journalists. The difference, in her case, is that she covers terrorism, and her online trolls are Islamic State members and sympathisers. "I think they figured out that I'm sensitive about my weight," she tells producer Andy Mills in the first episode of their podcast.

She explains, laughing, that their insult of choice is "Oinkmini Fatmachi". "There's something ironic about being fat-shamed by IS."

Callimachi (pictured), who has covered al-Qaeda and IS for The NYT since 2014, seems as unflappable as you'd expect of someone who is in daily contact with terrorists. Her job, of course, is fraught with risk. The FBI has told her she was named by IS in a "targeted threat".

The 10-part Caliphate podcast series offers a deeper dive into some of Callimachi's incredible reporting, including on the "IS files" – 15,000 pages of documents unearthed over five trips to Iraq – and a moving episode about Yazidi women who escaped after years of enslavement by IS.

Central to the series is the story of a young IS recruit, who has since returned to Canada. He bluntly recounts his life in Syria; it's gripping, but not easy, listening. Raised in a moderately religious middle-class family, he epitomises the growing problem of online radicalisation and the issues Western countries face in dealing with returning recruits. Although IS has lost large swathes of land in Syria and Iraq, the terror group continues to grow internationally. Capitulation, in Callimachi's view, is temporary. Violent extremists are easy to overcome with military force; defeating an ideology, less so.