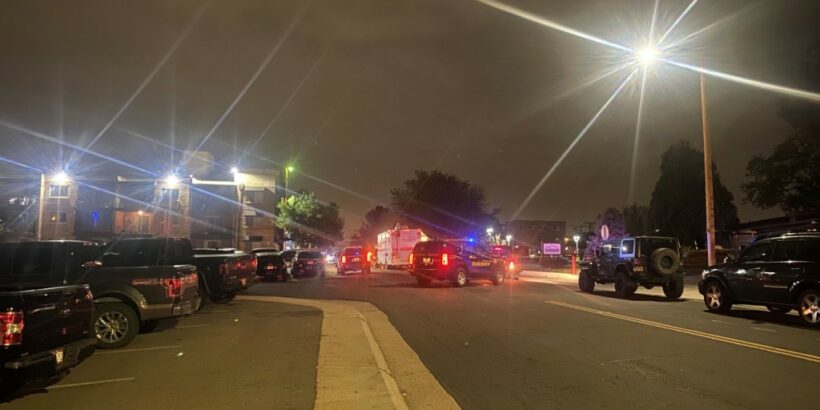 A search is now underway for the suspect, Littleton police Chief Doug Stephens said during a morning news conference.

Two officers responded to a call of shots being fired from a vehicle in that area shortly after midnight, Stephens said. They contacted “what they thought was a possible suspect vehicle,” and two suspects fled on foot, he said.

As one of the suspects entered an apartment building at 183 West Powers Avenue, he turned and fired multiple shots, striking one of the officers repeatedly, Stephens said.

The officer, who was wearing what Stephens described as body armor, was shot “more than three” times.

“We believe he received a few shots to his torso, which were absorbed by the body armor, and he received wounds to his extremities, his legs and arm, and possibly one up above his vest, on his chest,” Stephens said.

Both officers returned fire, Stephens said. “At this point, we don’t know if the suspect was struck,” he said.

The injured officer — who has not been publicly identified — was transported to a local hospital, where he underwent surgery and is now in the intensive care unit, Stephens said. The officer was described as being in serious but stable condition.

“His family is with him and they’ve asked for privacy,” the chief said.

While the second officer was helping the officer who’d been shot, the suspect fled, Stephens said.

Investigators have recovered the vehicle that the two officers originally stopped, but the other occupant who fled the scene also remains at large, Stephens said.

The Littleton Police Department initially asked residents in the area to remain in their homes. But Stephens said during the news conference that the area had been determined to be safe and residents no longer needed to shelter in place.