A live TV election debate has descneded into chaos as rival party members hurled chairs at each other during a massive brawl in South Africa.

Members of the Economic Freedom Fighters Party (EFF) could be seen throwing plastic seats and punches at their rivals during the broadcast from Hout Bay, a suburb of Capetown on Friday.

Residents had gathered at the Hangberg Sports and Recreation Centre to speak to the leaders of the Democratic Alliance, EFF, ANC, Black First Land First and Good parties. 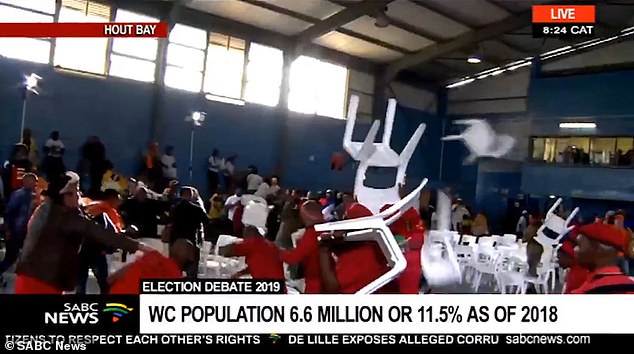 Plastic chairs can be seen flying through the air at the Hangberg Sports and Recreation Centre in Hout Bay, Cape Town on Friday 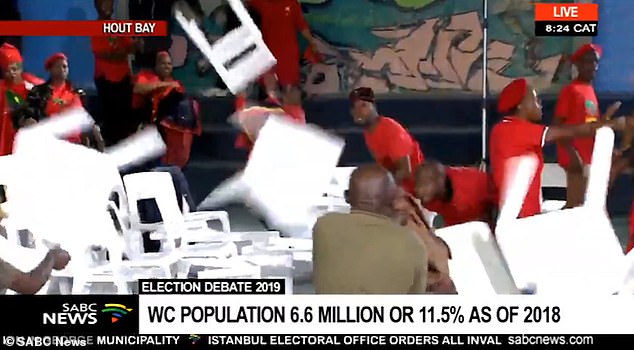 It is not entirely clear what sparked the violence, although the South African reported it may have been a reaction to perceived favouritism shown by presenter Sakina Kamwendo. 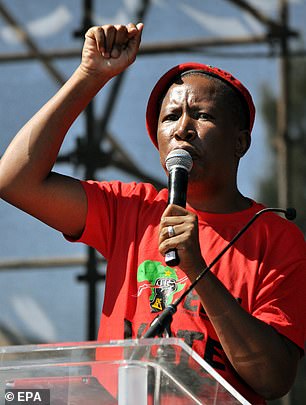 EFF’s leader for Western Cape Melikhaya Xheko told the Times: ‘The Land Party and the BLF came to chase away the EFF. They targeted the EFF that the EFF should leave.’

The BLF were formed by Andile Mngxitama after his expulsion from the EFF in 2015.

The concerned Morning Live presenter in the studio for SABC could be heard voicing worries over continuing to show the live feed of the violent scenes.

The debate was called off and SABC tweeted that none of their staff had been injured in the frenzy.

South Africa goes to the polls in 32 days and the EFF – controversial for their policies and racially inflammatory rhetoric – have been tipped for a gain of four percent on their 6.35 percent current share.

The ANC, headed by President Jacob Zuma, are predicted to win the election by around the same margin as the last time out, the latest Ipsos poll showed.

The Democratic Alliance will lose some seats and will come in second, Ipsos project.