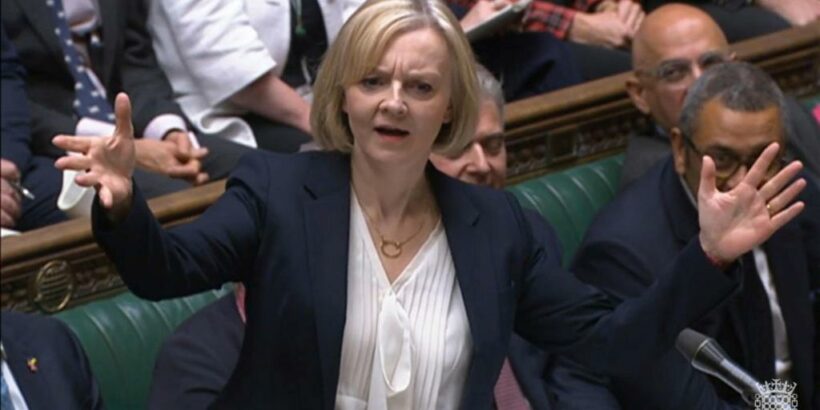 LONDON (AP) — British Prime Minister Liz Truss quit Thursday after a tumultuous and historically brief term marred by economic policies that roiled financial markets and a rebellion in her political party that obliterated her authority.

Truss became the third Conservative prime minister to be toppled in as many years, extending the instability that has shaken Britain since it broke off from the European Union and leaving its leadership in limbo as the country faces a cost-of-living crisis and looming recession.

“I cannot deliver the mandate on which I was elected by the Conservative Party,” Truss, 47, said outside her 10 Downing Street office.

Financial markets breathed a sigh of relief, but Truss leaves a divided ruling party seeking a leader who can unify its warring factions. Truss, who said she will remain in office until a replacement is chosen, has been prime minister for just 45 days and will go almost certainly down as the shortest-serving leader in British history. George Canning died in office in 1827 after 119 days.

The Conservative Party said it would choose a successor by the end of next week. Potential contenders include: former Treasury chief Rishi Sunak, who lost to Truss in the last leadership contest; House of Commons leader Penny Mordaunt; Defense Secretary Ben Wallace; and Boris Johnson, the former prime minister ousted in July over a series of ethics scandals.

The low-tax, low-regulation economic policies that got Truss elected by her party proved disastrous in the real world at a time of soaring inflation and weak growth.

Her Sept. 23 economic plan included a raft of tax cuts that investors worried Britain couldn’t afford. It pummeled the value of the pound and drove up the cost of mortgages, causing economic pain for people and businesses already struggling from an economy yet to emerge from the pain of the pandemic.

That financial tumult led to the replacement of Truss’ Treasury chief, multiple policy U-turns and a breakdown of discipline in the governing Conservative Party.

Truss resigned just a day after vowing to stay in power, saying she was “a fighter and not a quitter.” But she couldn’t hold on any longer after a senior minister quit her government amid a barrage of criticism and a vote in the House of Commons Wednesday descended into chaos and acrimony.

“It’s time for the prime minister to go,” Conservative lawmaker Miriam Cates said, echoing the sentiments of many others.

The pound rose about 1% Thursday to around $1.13 after Truss’ resignation.

Where the Conservative Party goes from here is not clear. Its myriad factions — from hard-right Brexiteers to centrist “One Nation” Tories — are at each other’s throats.

“Nobody has a route plan. It’s all sort of hand-to-hand fighting on a day-to-day basis,” Conservative lawmaker Simon Hoare told the BBC on Thursday before Truss resigned.

Newspapers that usually support the Conservatives were vitriolic. An editorial in the Daily Mail on Thursday was headlined: “The wheels have come off the Tory clown car.”

Truss’ departure on Thursday sparked jubilation for the tabloid Daily Star, which had set up a livestream last week featuring a photo of the prime minister beside a head of lettuce to see which would last longer.

While many Britons joined the world in laughing at the lettuce joke, Bronwyn Maddox, director of international affairs think-tank Chatham House, said “there is no question that the U.K.’s standing in the world has been severely battered by this episode and by the revolving door of prime ministers.”

She said Truss’ successor would need to have policies “based on economic stability, but need also to include a resolution of the relationship with Europe; much of the upheaval represents the bitter aftermath of Brexit.”

The Conservative party said nominations for a new leader will close on Monday. Candidates need the signatures of 100 of the 357 Conservative lawmakers, meaning a maximum field of three. Lawmakers will knock out one of those, and will ask the party’s 172,000 members to decide between the two finalists in an online vote. The new leader is due to be in place by Oct. 28.

Truss’ resignation is the culmination of months of simmering discontent inside the Conservative Party, whose poll ratings have plunged.

Johnson’s government came undone after he was revealed to have held a series of parties in government buildings at a time when people in Britain were barred from mingling with friends and family or even visiting dying relatives. The Conservative party spent the summer picking a replacement as the economy worsened amid spiking energy prices triggered by Russia’s invasion of Ukraine. Truss had served as Johnson’s foreign secretary.

Whoever succeeds Truss will become the country’s third prime minister this year. A national election doesn’t have to be called until 2024, but opposition parties demanded one be held now, saying the government lacks democratic legitimacy.

“This is doing huge damage to our economy and the reputation of our country,” he said. “We must have a chance at a fresh start. We need a general election – now.”

Truss’ political unraveling began after she and her Treasury chief, Kwasi Kwarteng, unveiled an economic plan with 45 billion pounds ($50 billion) in unfunded tax cuts. The notion of massive borrowing to finance tax cuts hammered the value of the pound and caused interest rates U.K. government bonds to rise. The Bank of England was forced to intervene to prevent the crisis from spreading to the wider economy and putting pension funds at risk.

Truss soon fired Kwarteng, and his replacement, Jeremy Hunt, scrapped almost all of Truss’ tax cuts, cut short her energy subsidies and abandoned her promise of no public spending cuts. He said the government will need to save billions of pounds and that there are “many difficult decisions” to be made before he sets out a medium-term fiscal plan on Oct. 31.

Speaking to lawmakers on Wednesday for the first time since the U-turn, Truss apologized and admitted she had made mistakes, but insisted she would not resign. Within hours, a senior Cabinet minister, Home Secretary Suella Braverman, quit, blasting Truss in her resignation letter, saying she had “concerns about the direction of this government.”

For many Conservative lawmakers, the final straw was a Wednesday evening vote over fracking for shale gas that produced chaotic scenes in Parliament, with party whips accused of using heavy-handed tactics to gain votes.

Chris Bryant, a lawmaker from the opposition Labour Party, said he “saw members being physically manhandled … and being bullied.” Conservative officials denied this.