The beginning of the end of London’s cycle lanes? Congestion-causing bike route on Euston Road will be removed – prompting calls for OTHER lanes to be axed

A cycle lane brought in as lockdown measures eased to try and reduce car numbers in London is being removed after causing traffic chaos.

Less than six months after Transport for London announced a series of measures to cut traffic in the Capital, the Euston Road bike lane is set to be removed.

Changes to streets, which saw some roads closed to traffic except for pedestrians and cyclists, have caused major problems in parts of London, as workers returned to offices, but avoided public transport to ensure they were complying with social distancing measures.

But after today’s reversal, announced by TfL commssioner Andy Byford, there are calls for other schemes to be axed, including in Park Lane. 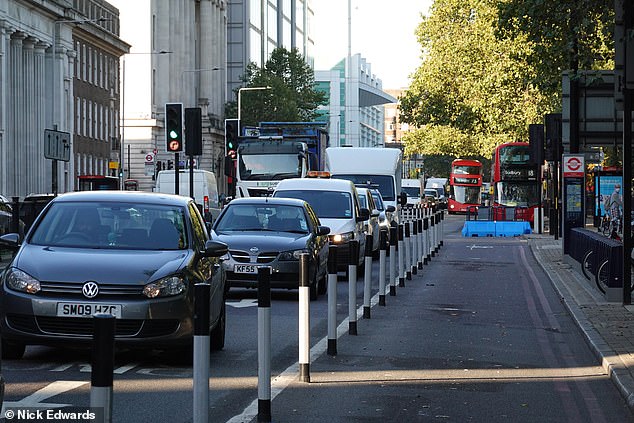 Large cycle lanes on Euston Road have remained mostly empty, the lanes were created at the cost of space on the carriageway for passing motorists.

Tony Devenish Conservative London Assembly member, told Mr Byford: ‘It would be really helpful, in terms of congestion, if you could get that one removed.’

Pop-up cycle lanes on either side of Euston Road were opened by TfL in July, with 20mph speed limits for passing motorists, but just three months later, London’s transport commissioner has announced it will be removed.

The lanes were set to be removed in late 2021 as part progressed on HS2, but they’re due to be cut short a year earlier than expected.

MailOnline has approached Transport for London to see if any other cycle lanes are expected to close early.

When Mayor of London Sadiq Khan announced the new Streetspace measures – designed to widen pedestrian and cycle lanes at the expense of carriageways – his office boasted cycling could increase ’10-fold,’

On Monday morning TomTom data revealed there were 527 miles of traffic jams across the capital as of 9am with 1,340 jams in total – and congestion levels at 66 per cent. 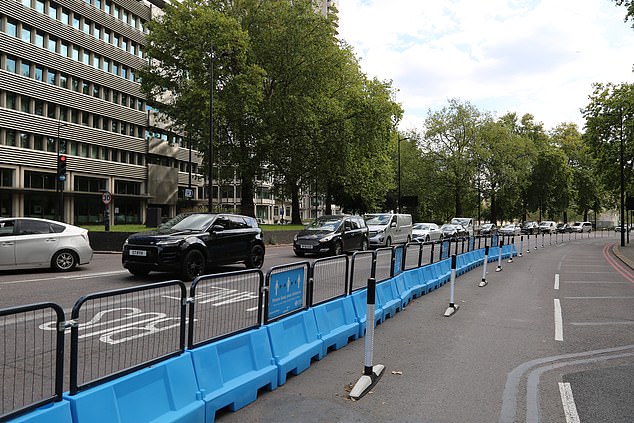 Park Lane’s pop-up cycle route also has remained relatively unused – prompting calls for it to be shut. Traffic levels continue to rise during the rush hour in London

This figure was up ten percentage points from 56 per cent at the same point last week, and up from an average of 43 per cent from the same time last year.

Public transport usage during the coronavirus pandemic is well down on normal levels, according to the most recent data from Transport for London.

Meanwhile bus usage was down 1 per cent on the previous week to 964,000, which was 55 per cent of normal demand.