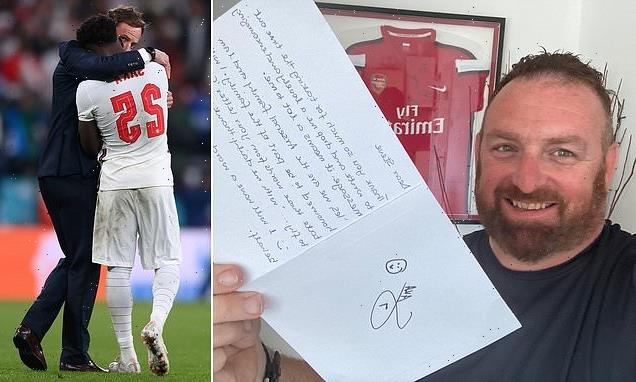 London bus driver, 55, who wrote to England footballer Bukayo Saka telling him to ‘rise up and fly’ hours after he missed penalty in Euro 2020 final receives a hand-written thank you through his door

An England football fan who wrote to Bukayo Saka after his missed penalty in the Euro 2020 final was left overwhelmed when he received a hand-written letter from the Three Lions star.

Steve Byrne, 55, decided to write to the Arsenal and England midfielder after the nation’s Euro 2020 defeat to Italy at Wembley earlier this month.

The London bus driver, from Brookmans Park in Hertfordshire, who resides a short distance away from Saka’s home, sent the words of encouragement after he saw the 19-year-old being consoled by the England manager Gareth Southgate on the pitch.

But last Sunday, Mr Byrne was shocked to discover a hand-written letter from the football star posted through his door.

In his response, the footballer thanked the bus driver for the ‘lovely and encouraging message’ before going on to tell him ‘it means a lot to me’.

Mr Byrne, who is also an Arsenal fan, told MailOnline: ‘In the card that I wrote to him I told him you will rise up and fly and I said I was inspired by him. 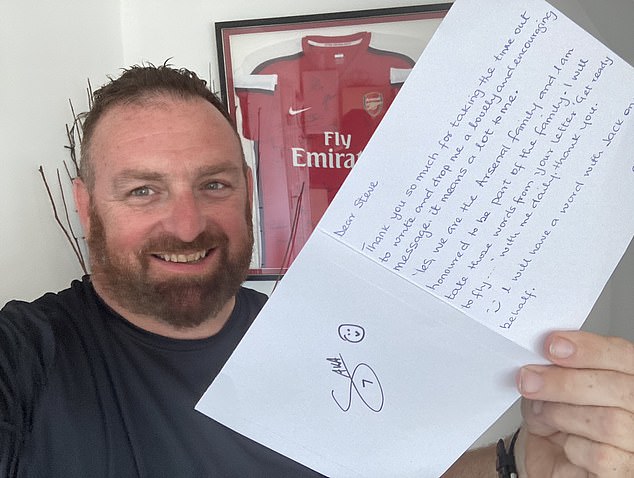 Steve Byrne, 55, from Brookmans Park in Hertfordshire, wrote to Bukayo Saka after his missed penalty in the Euro 2020 final

‘We are the Arsenal family and we look out for each other. I also joked that he should get Jack Grealish to sign with Arsenal.

‘I wrote in a quote by the American general George S. Patton who said ”success is measured on how high you bounce up after hitting bottom” and then I added ”you will bounce up so get ready fly”.

‘The letter was sent before the news emerged of the racism the footballer had endured and I didn’t know anything about it at the time.’

The bus driver, who in 2013 was diagnosed with the rare blood disease ANCA Vasculitis, said he only discovered that the England midfielder lived close to him after taking an early morning run one day.

He continued: ‘I was running in my area one day when I saw Saka going into a house. Due to Covid I didn’t go too close to speak with him but after England’s defeat in the Euro 2020 final I thought I would post a card through his door.

‘I’m an Arsenal fan and a big fan of Saka and when I saw him crying and being hugged by Gareth Southgate, my heart just went out to him.

‘I just wanted to tell him it’s ok. I have a son who is a similar age and it could have been him. I didn’t want Saka thinking he had ruined it for the country. It doesn’t matter. He’s playing for the national team and at such a young age.

‘I wanted to write something to him for all his efforts during the tournament. I also felt like he was just an inspiration to everybody watching him. ‘

Last Sunday, Mr Byrne received a hand-written letter from the football star through his door thanking him for his words of encouragement.

The bus driver said: ‘It was last Sunday when I was having an afternoon nap that I heard my doorbell go off but I didn’t answer the door because I was too tired.

‘It was only the next day on the Monday that I saw the card on my mat and opened it up to see I had received a response from Saka. I just thought ”oh my god”.

‘The most famous footballer in the country had sent a card to me. I wasn’t expecting that but it was a lovely letter. Everyone was telling me to give him a hug from them. 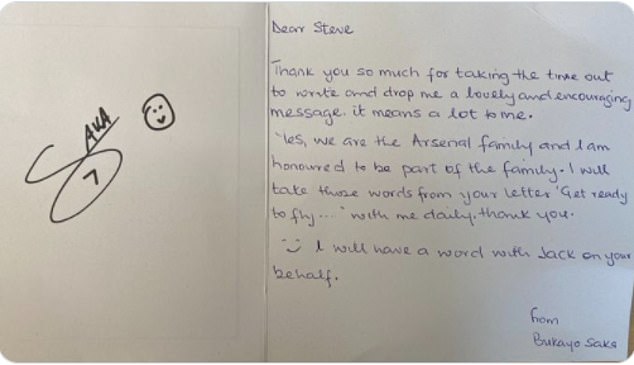 Last Sunday, Mr Byrne received a hand-written letter from the England midfielder thanking him for his words 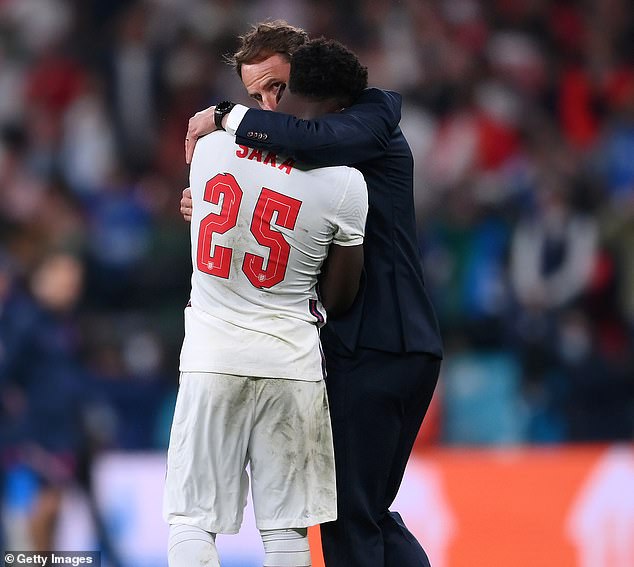 ‘I remember as I was writing the card thinking ”I hope he can read this”.

In his response, the footballer wrote: ‘Dear Steve, thank you so much for taking the time out to write and drop me a lovely and encouraging message, it means a lot to me.

‘Yes, we are the lovely Arsenal family and I am honoured to be part of the family. I will take these words from your letter ‘get ready to fly’ with me daily, thank you.

‘I will have a word with Jack on your behalf, from Bukayo Saka.’

Mr Byrne added: ‘I just thought of all the hundreds of fans he probably has he gave a card to me. It’s an absolute privilege. I’m going to frame the card I received from him.’

The bus driver went on to explain that he first took up running after his ANCA Vasculitis diagnosis in 2013.

He added: ‘In 2013 I was diagnosed with ANCA Vasculitis and I was admitted into the Royal Free Hospital.

‘My recovery went on for eight months and included injections, six rounds of chemotherapy and medication including steroids. I made a full recovery and then two years ago I decided to keep healthy.

‘I noticed that if I did a run in the morning and again at night there were no seizures – hence me running past Saka’s house everyday.’

Last week Saka spoke out for the first time since missing a penalty in England’s Euro 2020 final, claiming that he knew instantly that he would be targeted by racist abuse.

The Arsenal and England midfielder was one of three penalty takers for the Three Lions that missed their spot-kick, along with Marcus Rashford and Jadon Sancho.

He wrote: ‘It was an honour to be part of an squad that leads by example, they are brothers for life and I’m grateful for everything that I have learnt from every one of the players and staff who worked so hard.

‘To help that team reach our first final in 55 years, seeing my family in the crowd, knowing what they’ve given up to help me get there, that meant everything to me.

‘There are no words to tell you how disappointed I was with the result and my penalty. I really believed we would win this for you. I’m sorry that we couldn’t bring it home for you this year, but I promise you that we will give everything we’ve got to make sure this generation knows how it feels to win.

‘My reaction post match said it all, I was hurting so much and I felt like I’d let you all and my England family down, but I can promise you this.. I will not let that moment or the negativity that I’ve received this week break me.

‘For those who have campaigned on my behalf and sent me heartfelt letters, wished me and my family well – I’m so thankful. This is what football should be about. Passion, people of all races, genders, religions and backgrounds coming together with one shared joy of the rollercoaster of football.’

He added: ‘I knew instantly the type of hate that I was about to receive,’ Saka wrote on Instagram, ‘that is a sad reality’.

‘There is no place for racism or hate of any kind in football or in any area of society and to the majority of people coming together to call out the people sending these messages, by taking action and reporting these comments to the police and by driving out the hate by being kind to one another, we will win.’

Following his message, England’s official account added: ‘You should be incredibly proud of the role you played in our incredible journey this summer, Bukayo.