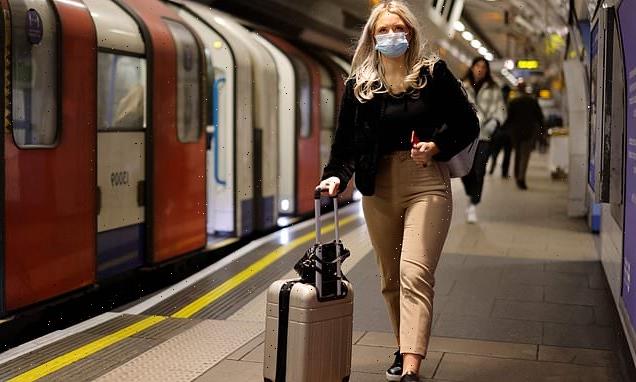 Riding on the London Underground and similar networks poses a ‘low risk’ of catching Covid, according to a Government-funded study.

Use of the tube has fluctuated massively during the pandemic, with experts and politicians warning it was a breeding ground for the virus.

People were even banned outright from getting on the trains during lockdowns, except for key workers and emergency services.

But now Leeds University scientists argue major transport networks like the capital’s tube lines were not super-spreaders of the virus.

They built a computer simulation to estimate how Covid spread on underground trains, based on previous models which estimated how flu, SARS and norovirus were transmitted on airplanes.

It found short journey times, little overcrowding, good ventilation and high uptake of face masks meant there was a low risk of catching the virus while on the tube.

The study, however, was carried out before the Omicron variant emerged which spreads much more easily than older mutant strains.

But the scientists said wearing face masks — still required on the Underground — is continuing to cut the risk of infection on trains.

Professor Cath Noakes, an environmental engineer who led the research, said the risk of catching the virus on the tube was ‘likely to be quite low’. 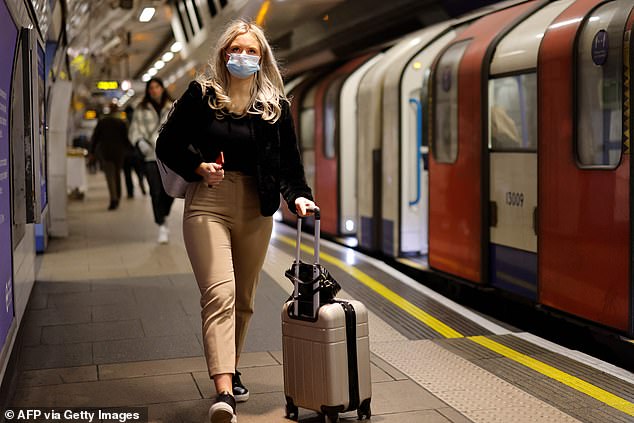 In the study, scientists simulated the risk of catching the virus when standing two metres from others, after touching contaminated surfaces and from the tube’s air.

They concluded people were most at risk of being infected on the tube if they were near an infectious person.

But these events were ‘infrequent’, and only involved a ‘small number of individuals’.

Shopping is riskiest activity for getting Covid, study says

People who do a weekly shop are more than twice as likely to catch Covid than those who get their groceries delivered online, an official study has suggested.

SAGE’s Virus Watch Study examined the day-to-day activities of over 10,000 people in England and Wales between September and November 2021.

Going to the shops once a week seemingly carried the biggest likelihood of catching the virus, with those doing so being 2.2 times more likely to test positive — according to the paper published last month.

This was followed by playing sport outside, with those who did 1.36 times as likely to test positive.

But researchers acknowledged this could be due in part to social activities attached to such events, rather than the playing sport itself.

The risk of testing positive after going in a pub a few times a week – about 1.3 times higher than not – was the same as frequently taking public transport.

However, the time period analysed means it will not include any data from the recent Omicron wave of cases which only picked up from mid-December.

On the other hand, air on subway trains posed little risk of infecting passengers because trips tended to be short with good ventilation and most people were wearing face masks, they said.

The scientists noted that as infection rates ticked up in the community, the risk of catching Covid on the Underground also rose.

They said while it was ‘possible’ to catch the virus on the Underground, there was no evidence to suggest its trains were major centres of transmission.

Professor Noakes and co-authors recommended that Britons continue wearing face masks on public transport to reduce their risk of catching the virus.

And they said when infection rates are high, officials should consider bringing back the one-metre-plus rule for networks.

They said ‘one of the most effective strategies to decrease overall infection risk’ was to tell people who have the virus to remain at home.

The computer model was not tested in the real world, and did not take into account vaccination levels or the Omicron variant which likely skew the results.

But Professor Noakes insisted that current measures — such as face masks — were ‘still likely to be effective’ at reducing the spread of the virus.

She said: ‘All environments where people interact together have a risk of virus transmission and public transport is no exception.

‘Where journeys are short and not overcrowded, and the carriage is well ventilated, then the risks are likely to be quite low.

‘Wearing a face covering can [also] significantly reduce risk of the virus spreading, particularly as it can be harder to socially distance in a Tube or subway carriage at certain times of the day.’

The study only looked at the risk of catching Covid on subway rail systems such as the London Underground. It did not consider the risk on buses, trains travelling long distances and planes.

It was carried out as part of the £1.7million TRACK project, set up to investigate the risk of catching Covid on public transport.

This is funded by the Department for Transport and Engineering and Physical Sciences Research Council, which funds research into transport. It was published in the journal Indoor Air.

England lifted rules requiring face masks in public places last month, ahead of Scotland, Wales and Northern Ireland where they are still mandatory.

But on the London Underground and similar transport networks in England the coverings are still recommended — although in practice this is not enforced.

The legal requirement to self-isolate if someone tests positive for Covid is also set to lapse at the end of March.

And the distribution of free lateral flow tests is expected to end in July, making it more likely someone infected with Covid may travel on public transport.

Journeys on the Underground take about 13 minutes, analysis of official data suggests, although this only includes time spent actually on the train.

But on the most popular routes — such as Stanmore to Stratford and Covent Garden to Leicester Square — trips can take around 47 minutes.

More than nine in ten people in the capital are still wearing face masks (93 per cent), data from the Office for National Statistics suggests.

And Transport for London — which operates the network — says air in its carriages is changed every three minutes, compared to the every five minutes recommended.

London transit use — including the underground, overground and buses — took a year and two months to recover to normal levels after the virus struck in March 2020.

But it is now 50 per cent above the levels from January two years ago, and still rising amid the return to offices.

Dr Julian Tang, a virologist who was not involved in the research, said it was impossible to prove whether someone had caught the virus on public transport.

But he added the study ‘supports what we already know’ — that face masks and social distancing help to reduce viral transmission.

The Leicester University scientist told MailOnline: ‘In short, the model outcomes (although they cannot be effectively validated) support what we already know — that masking ventilation and social distancing (involving reduced occupancy) — all work to reduce virus exposure and transmission and/or infection risk.

‘I welcome this study and praise the group at Leeds (whom I know personally) that published it.’