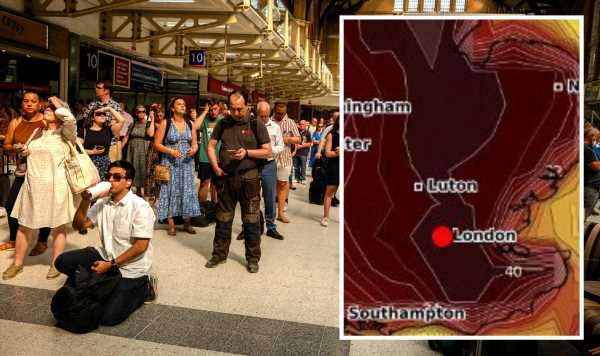 The city already reached an incredible 28C by 9am, according to the Met Office, with temperatures steadily climbing to an already sizzling 34C before noon. While the forecaster only predicts highs of 38C by 3pm, weather model WX Charts shows this figure may be exceeded to 40C. This, it claims, will last until around 6pm. By 9pm thermometers will only dip to around 35C, with the real plunge in temperatures being recorded tomorrow.

Tomorrow morning will start off in the early 20s, but will still reach 29C by midday.

Only on Thursday will the atmosphere feel much cooler, as the capital will peak at 26C.

While this temperature is still very warm, it will be nowhere near the dizzying heights of 40C forecast today.

Today’s record-breaking mercury will not just be in London, with some of the south east also copping the brunt of the extreme temperatures. 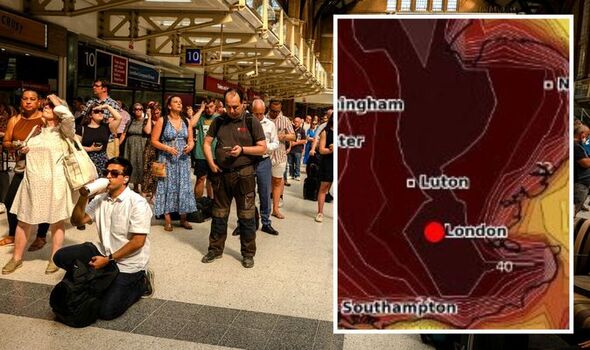 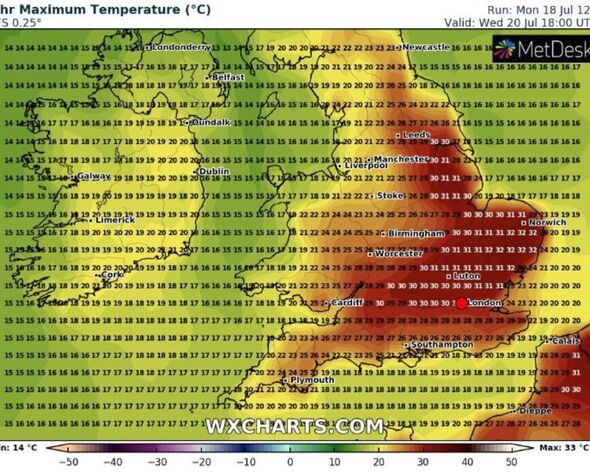 WX Charts shows Kent, Hertfordshire, parts of Essex, Cambridgeshire and Norfolk will be among those most likely to reach this historical number.

The last time meteorological records were smashed was back in July 2019, when Cambridge recorded 38.7C.

Yesterday, July 18, the top temperature recorded in the capital was 38C, which was the hottest day of the year, but did not exceed any records. 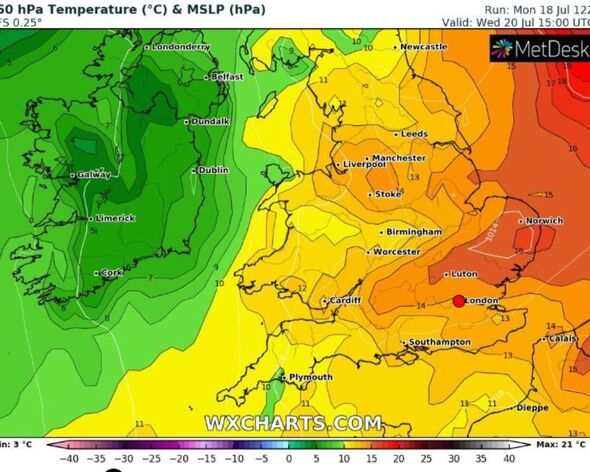 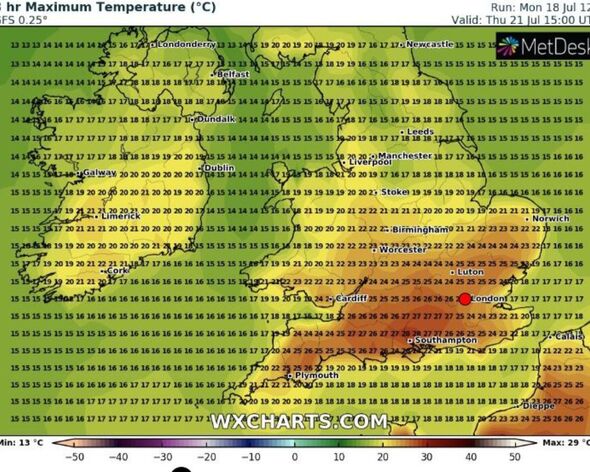 It is the first time the forecaster has issued it, with the rest of the country under an already severe amber weather warning.

The red and amber warnings say the heat poses a danger to life, and can cause serious health issues among the fit and healthy, not just the vulnerable.

It warns of substantial delays on the public transport network, as railways buckle under the intense heat and tarmac on the roads is prone to melting.

Transport Secretary Grant Shapps admitted on BBC Breakfast that much of the country’s railway infrastructure is Victorian and is unable to cope with intense heat pressures.

DON’T MISS
Heatwave brings UK to a halt [SPOTLIGHT]
Drivers urged to be hyper vigilant: Hot weather could result in fine [REPORT]
When will it rain? Latest UK forecast for storms amid UK drought [MAPPED]

He told BBC Breakfast: “We’ve seen a considerable amount of travel disruption, we’re probably going to see the hottest day ever in the UK recorded today and infrastructure, much of it built in Victorian times, just wasn’t built to withstand this type of temperature – and it will be many years before we can replace infrastructure with the kind of infrastructure that could, because the temperatures are so extreme.”

It warned of more disruption later today due to the closure of some lines, saying: “Due to the red weather warning we must close the East Coast Main Line on Tuesday afternoon for all locations between London King’s Cross and York and Leeds.”