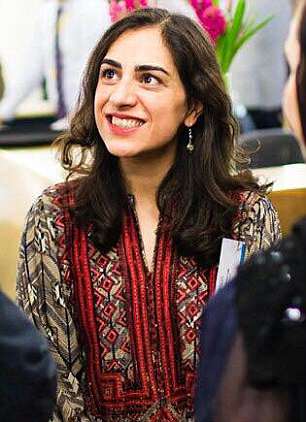 Aras Amiri, who lives in London, was held while on a private trip to visit family

Two people with links to the UK have been detained in Iran, officials have said.

The Foreign Office said it was ‘urgently seeking information from the Iranian authorities’ over the detention of Iranian-British national Mahan Abedin.

Separately, Iranian national Aras Amiri, who lives in London, was held while on a private trip to visit family.

Her employer, the British Council, which works to improve international cultural relations, said assertions one of its staffers had been working in the country were false.

A spokeswoman said: ‘We are aware that one of our staff has been detained in Iran while making a private family visit.

‘The colleague is an Iranian national. Despite an assertion that this individual has travelled to Iran for work this is not the case.

‘The British Council does not have offices or representatives in Iran.’

Her cousin, Mohsen Omrani, wrote on Facebook to explain that Aras has been ‘jailed by forces belonging to Iran’s ministry of intelligence’. 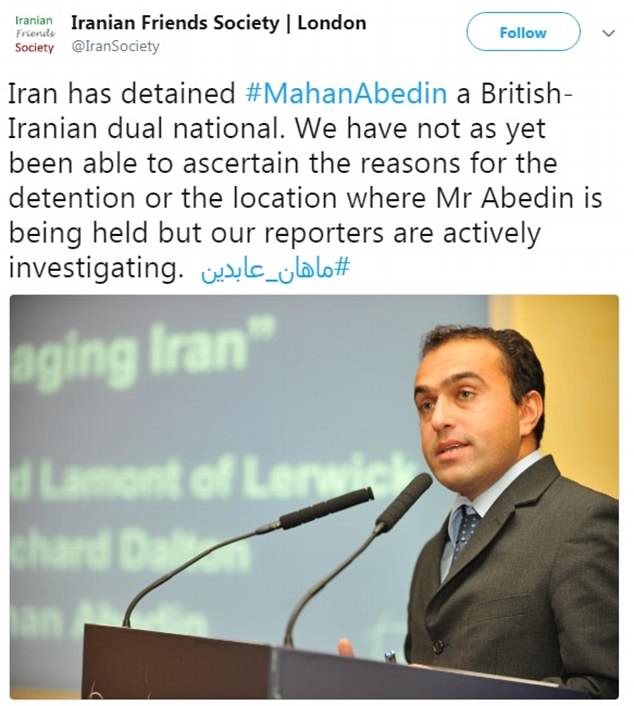 The Foreign Office said it was ‘urgently seeking information from the Iranian authorities’ over the detention of Iranian-British national Mahan Abedin. Pictured: The Iranian Friends Society of London tweeted about Abedin’s detention

He added: ‘They arrested her before the Eid and it’s now nearly 50 days that she is being kept in Evin prison’s ward 209.’

Omrani also said she had been accused of acting against the national security of Iran.

He said she is 32 and has lived in London for 10 years. She is studying philosophy of art at Kingston University, he said, explaining that she has a residence permit.

She had gone to the city of Amol to visit her grandmother in hospital, he said. 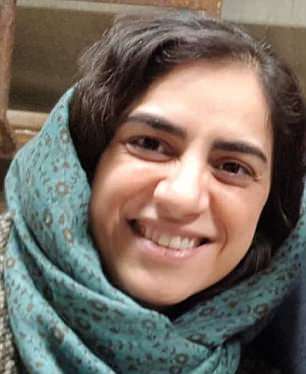 Her cousin, Mohsen Omrani, wrote on Facebook to explain that Aras (pictured) has been ‘jailed by forces belonging to Iran’s ministry of intelligence’

They are the latest people with ties to the West to have been held in the Islamic Republic.

British-Iranian mother Nazanin Zaghari-Ratcliffe has been jailed in the Republic for just over two years – despite an Iranian diplomat insisting the government was doing its best to secure her release.

Mrs Zaghari-Ratcliffe was jailed for five years in 2016, accused of seeking to overthrow the Iranian regime.

But she denies the charges, insisting that the trip to Iran was a holiday, designed to introduce her daughter to her Iranian family.

Hamid Baeidinejad, Iranian ambassador to the UK, said the judicial process in her case was ‘complicated’ but insisted ‘we are trying our best’.

Iran does not recognise dual citizenship, making it complicated for the British Embassy to make contact.

The British Council suspended its work in Iran in 2009 on the orders of then-Iranian president Mahmoud Ahmadinejad.

Analysts and family members of dual nationals and others detained in Iran say hard-liners in the Islamic Republic’s security agencies use the prisoners as bargaining chips in negotiations with the West.

Iran and Britain have been discussing the possible release of some 400 million pounds held by London since the 1979 Islamic Revolution for a tank purchase that never happened. 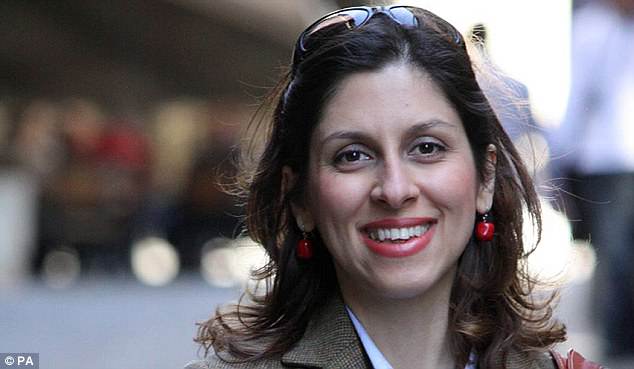 Mrs Zaghari-Ratcliffe was jailed for five years in 2016, accused of seeking to overthrow the Iranian regime

A prisoner exchange in January 2016 that freed Washington Post journalist Jason Rezaian and three other Iranian-Americans also saw the US make a $400 million cash delivery to Iran the same day.

Others with ties to the West detained in Iran include Chinese-American graduate student Xiyue Wang, who was sentenced to 10 years in prison for allegedly ‘infiltrating’ the country while doing doctoral research on Iran’s Qajar dynasty.

Iranian-Canadian national Abdolrasoul Dorri Esfahani, a member of Iran’s 2015 nuclear negotiating team, is believed to be serving a five-year sentence on espionage charges.