With the ban on international travel expected to drive more swimmers to the state's beaches over the summer, the government's campaign across TV, radio and social media will urge men aged between 45 and 64 to "know the conditions" and "know your limits".

Since July, 27 people have drowned in Victoria, including five young children and, on Saturday, a man at Frankston. The number of deaths is the highest figure recorded for this time period in about 20 years of record-keeping and 11 more than the 10-year average.

Drownings dropped 23 per cent in the 2019-20 financial year but Police and Emergency Services Minister Lisa Neville said a "terrible" trend had emerged among the two cohorts of males, prompting the state government to invest $1.7 million to increase the number of lifesavers by about one-third.

Lifesaving Victoria will also double its drone capacity to monitor the spread of people across beaches and it will procure a second helicopter for aerial monitoring.

"We're breaking records, unfortunately … I don't like to break these kinds of records," Ms Neville said. 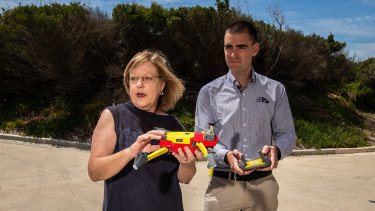 "People have to take care on our beaches. We don't want to see this trend continue for the rest of our summer."

Ms Neville, who was a keen swimmer in her youth and needed to be rescued in her 20s, said some older men were complacent and unrealistic about their limitations in the water.

Some men from culturally diverse backgrounds encountered difficulty in the water because they did not grow up around waterways and might not have received swimming lessons, according to Ms Neville.

Signage around beaches was sometimes not understood by the non-native English speakers, she said.

Kane Treloar, Life Saving Victoria's director of lifesaving services, said the focus of water safety had traditionally been on children. "What we're asking Victorians this summer is to think about your grandparents [and] mum and dad," he said.

Mr Treloar said people should swim only at patrolled waterways, swim between the flags and be accompanied by another person in case of a medical emergency.

The public education push will focus on the dangers of swimming while intoxicated. About 30 per cent of drownings involve alcohol.

The advertisements will encourage boaters to carry emergency equipment and urge rock fishers to wear life jackets. Half of all drowning deaths in the 2019-20 financial year were the result of unintentional entry into the water.

The $1.7 million will help place about 300 new lifesavers at Victorian waterways over summer.

The number of patrolled beach areas will increase and authorities will attempt to create more space between flags at popular beaches. Additional swimming areas flanked by flags may also be created.

Personal protective equipment will be provided to volunteers at 57 surf lifesaving clubs and lifesavers will be trained on COVID-safe practices.

Ms Neville said the increased space to swim at beaches would allow beachgoers to spread out and maintain physical distance from one another.