LORD LAMONT: I’ve always backed the House of Lords. But after this Brexit power grab, my colleagues are forcing me to reconsider

The great 19th century political writer Walter Bagehot once said that ‘the best cure for admiring the House of Lords is to go and look at it’. His words could be applied to the Upper House today, where irresponsible partisanship over Brexit risks the creation of a constitutional crisis.

As the confrontation with the Government deepens, all respect for public opinion has been abandoned by a large number of peers in their undemocratic quest to overturn the result of the EU Referendum.

So far the House of Lords has inflicted nine defeats on Theresa May’s Brexit legislation, and several more are likely to follow in the coming days.

Such a sustained challenge by the peerage to an elected administration trying to implement the centrepiece of its programme is unprecedented in modern times.

It is true that the Commons can still overturn these decisions, but the cumulative impact of this relentless pressure from the Upper House is bound to be destructive. 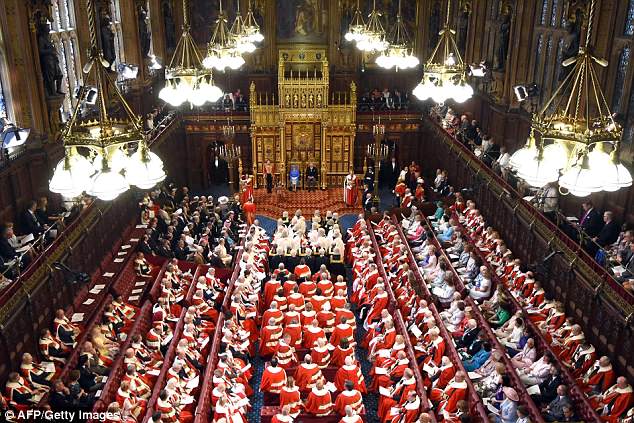 It is true that the Commons can still overturn these decisions, but the cumulative impact of this relentless pressure from the Upper House is bound to be destructive

It is against the national interest as Britain’s negotiating strategy with the EU will be undermined. Just as importantly, a climate of public despair and frustration now begins to hang over Brexit, just as the Remain lobby wants.

As they maintain their parliamentary campaign of obstruction, the anti-Brexit peers dress up their actions in the rhetoric of reasonableness.

Remain-supporting peers claimed yesterday that the latest defeat on the Government was about ‘taking back control’ by giving Parliament and the public more say over the withdrawal negotiations.

But such soothing language cannot disguise the reality that the true aim is to keep Britain in the EU. Indeed, the leading pro-Brussels group Better Britain openly boasted on social media that the vote on Monday was for ‘the Stop Brexit amendment’.

For most of my life I have believed in the merits of an appointed Upper House rather than an elected one, partly because I think the House of Commons must be dominant at Westminster, and partly because the Commons’ constitutional supremacy reduces the chances of legislative deadlock.

The system of appointment through life peerages also allows the presence in the Lords of a wide range of experts, including doctors, engineers, scientists and judges.

The collective expertise in the Upper House undoubtedly exceeds that of the Commons and the presence of cross-benchers and the fact that no single party has a majority has, in the past, enabled it to be more constructive and less confrontational.

But I am afraid the recent antics of my colleagues are forcing me to reconsider.

Perhaps a non-elected house is now an untenable proposition.

It is surely intolerable that the Lords – unaccountable and devoid of any mandate – has decided that it is has the right not only to dictate to the Government and the Commons, but even to thwart the clearly expressed decision of the British public.

If peers continue their present reckless approach, the only solution will be the replacement of the present House by a properly elected one.

There can be little dispute that the House of Lords has become engaged in a power grab, seizing for itself a new influence over the fundamentals of state policy.

The House is not meant to be like this. It is supposed to be a revising chamber that improves and tidies up legislation. But the unending stream of anti-Brexit amendments in the Lords go far further than just ‘tidying up’. So far the House of Lords has inflicted nine defeats on Theresa May’s Brexit legislation, and several more are likely to follow in the coming days

They have the potential to wreck the entire negotiations with the EU.

That is certainly true of Monday’s amendment – voted by 335 to 224 – to give Parliament the right to take charge of the whole direction of negotiations with Brussels if certain strict timetables are not met.

The House of Lords effectively wants to block the ability of the Government to walk away from the negotiating table, no matter what the intransigence from the EU.

In practice what the Upper House has demanded is an extraordinary constitutional innovation, whereby Parliament would tell the Government how to conduct negotiations and even set the timetable.

There has been nothing like this in our history. Treaties have always been negotiated by ministers, never ever by the two chambers of Westminster.

If implemented, this Lords amendment would be a disaster for the country. It would provide a direct incentive to the EU to offer us the worst possible terms, knowing that the Government cannot leave the talks without a deal.

Even more disturbingly, Parliament, having taken charge of the negotiating timetable, could decide at any moment to withdraw the notice given under Article 50 – the formal notice to quit the EU – and keep Britain in the EU.

In fact, some peers this week expressed the hope that exactly this would happen as they paraded their support for the wrecking amendment.

The saga is all the more absurd because the EU Withdrawal Bill – the measure which has been subjected to a barrage of pro-Remain amendments – is actually very limited in its scope. Although very long, it is simply a piece of legislation that allows EU law to be translated into British law, with the aim of maintaining legal continuity after we leave the EU. 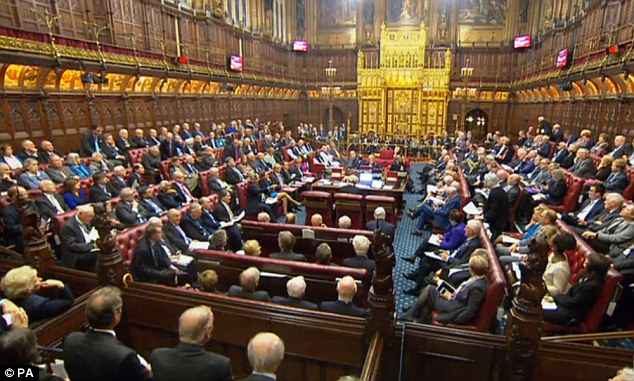 As they maintain their parliamentary campaign of obstruction, the anti-Brexit peers dress up their actions in the rhetoric of reasonableness

Yet, ridiculously, the Bill has been used like a kind of legislative Christmas tree from which the Remainer peers are hanging the decorations of theirpet causes.

This has happened because the House of Lords, in stark contrast to the electorate, has a significant pro-Remain majority. There is probably an anti-Brexit majority in the Commons as well, but at least MPs feel bound by manifesto promises and the need to submit themselves to scrutiny at the ballot box.

No such constraints exist for members of the House of Lords, who can give full vent to their personal feelings in the knowledge that their seats are secure. The decisive pro-Remain majority can lead to grotesque double standards, as could be seen in the Lords debate this week.

When one Liberal Democrat compared Theresa May’s handling of the Brexit negotiations with the leadership of Adolf Hitler in Nazi Germany in 1933, there was barely a murmur of protest at this ludicrous and offensive analogy.

Yet shrieks of disgust filled the chamber when a pro-Leave peer described the Remain lobby as ‘a fifth column’ for Brussels. The performance of the Liberal Democrats underlines the undue influence that they have in the House of Lords.

With just 12 MPs, the party has little impact on the Brexit debates in the Commons, but it is entirely different in the Upper House, where there are nearly 100 Liberal Democrat peers, almost all of them devoted to the fight against Brexit.

Without this phalanx of die-hard Remainers, fewer of the pro-EU amendments would have been passed.

The Liberal Democrats’ disproportionate role in the Lords is not only unfair but it is also riddled with hypocrisies. The party’s peers now rage against the supposed folly of the referendum. According to them, it was only an ‘interim’ vote.

But it was Nick Clegg who, in the run-up to the 2010 general election, campaigned noisily for a straight In/Out vote on EU membership.

Furthermore the current leader Sir Vince Cable explicitly stated soon after the 2016 referendum that the decision should be accepted. ‘The public have voted and I do think it’s seriously disrespectful and politically utterly counter-productive to say, “Sorry guys, you’ve got it wrong, we’re going to try again.” I don’t think we can do that.’

Yet his party in the Lords put down an amendment for just such a second referendum and has even – with breathtaking dismissiveness – referred to the 2016 outcome as nothing more than ‘an interim vote’.

The Liberal Democrats, along with the other Remainer peers, are playing with fire.

If they succeed in their goal of thwarting Brexit, there will be a massive awakening of bitterness, the like of which we have not witnessed in recent times. The consequences could be unpredictable.

They will comprehensively destroy public faith in British democracy, let alone any support for the unelected House of Lords.