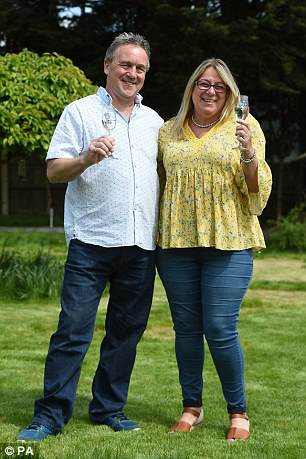 Sue Richards, 51, and 58-year-old Barry Maddox had a champagne bottle mown into their lawn after Lotto win

A lottery-winning couple who scooped £3 million on a scratch card have carved a huge reminder of their big win into their own garden.

Neighbours of Sue Richards, 51, and 58-year-old Barry Maddox will be in no doubt of their healthy bank balance after the pair had a champagne bottle mown into their lawn.

The couple moved into their dream home in Billericay, Essex, after carer Ms Richards won the National Lottery prize money in 2016.

Since the pair moved into the four-bedroom detached property it has been frequently spotted with jaw-dropping lawn art.

Mr Maddox who is keen on gardening said friends set him the champagne bottle challenge this time around. His previous lawn efforts include Wimbledon stripes and a chequerboard design.

Ms Richards said a man they nicknamed Mr Lawn helped them with the champagne designs, and it took three days to mow the masterpiece using three varieties of lawnmower and scissors of varying sizes. 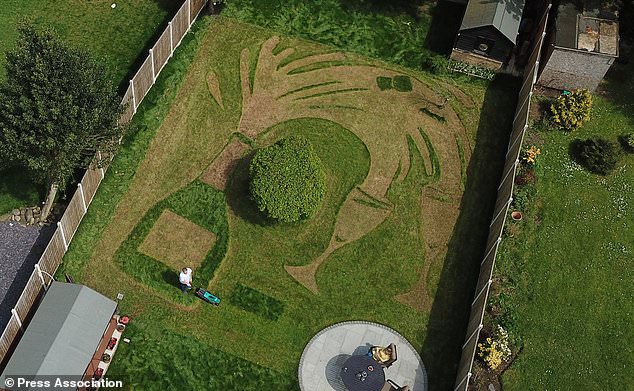 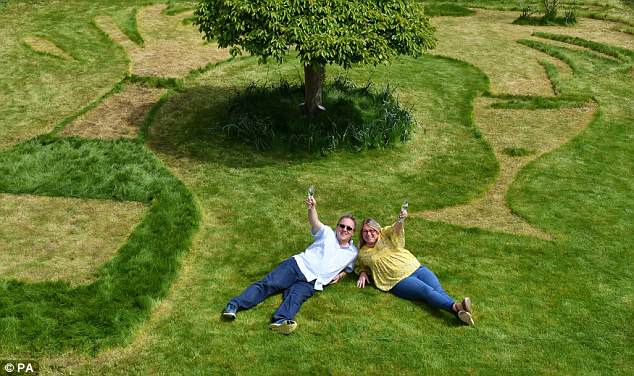 The Essex couple said friends challenged them to have the champagne bottle image carved into their garden grass. The creation was made with three lawn mowers and various scissors

The end product is a large grass champagne bottle with a popping cork, and fizz pouring into two champagne flutes.

‘Neighbours can see it as we’re in a converted bungalow and there are two-storey houses next door.

‘I wouldn’t be surprised if the neighbours beyond that have seen it.’

She said she mentioned it to neighbours before work started and they were ‘intrigued’, but she had yet to ask them what they thought of the finished lawn art.

Ms Richards bought her winning scratch card from a local supermarket on the way home from a night shift as a care worker, and said she still works as a carer.

The couple, who have been an item for 12 years, used some of the winnings to swap their terraced housing association property for a £750,000 home with a garden covering a third of an acre.

Ms Richards also went to an Audi garage and splashed out on four new cars, bought a motorhome ‘which is my pride and joy’ and has enjoyed exotic holidays, including to Australia. 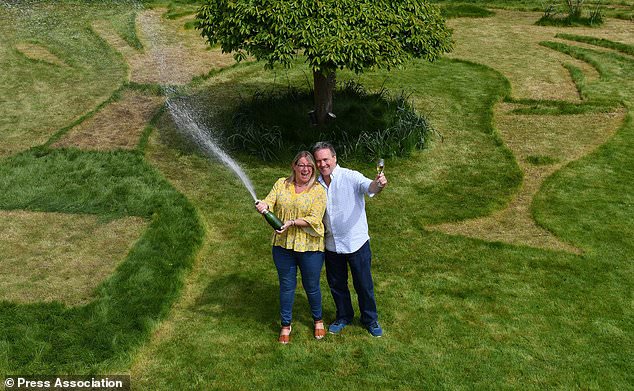 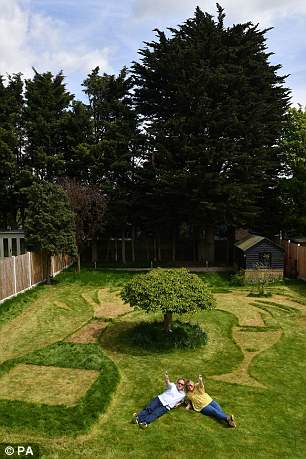 Ms Richards, who has two children, and Mr Maddox, who has three, said they had also used money to help family members.

Mr Maddox, who was a building site manager and is now a kitchen designer, said of their newly mowed lawn: ‘We were getting infamous for the stripes and checks, so we were up for doing something a bit different.

‘You can’t say this isn’t different!

‘The neighbours must think we are mad but I’ve always taken a lot of pride in my garden and this has been really fun to do too.

‘Who knows, maybe we’ve created a trend for the summer, lawn-Moeting.’

He said he expected the design to grow out within weeks, and their next project might be a maze for the family to enjoy.