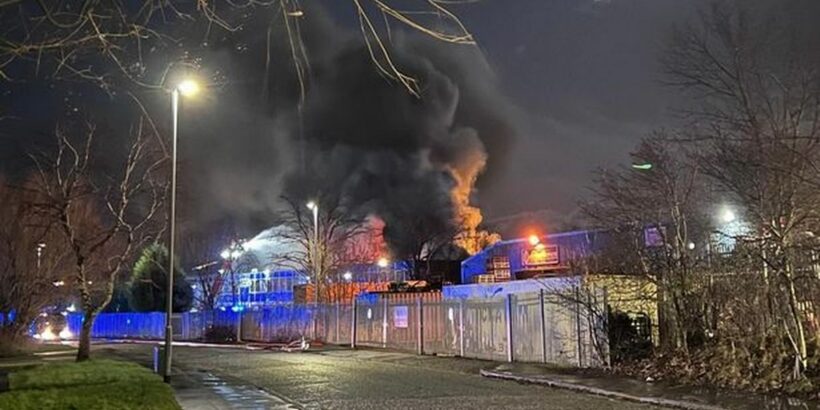 A massive fire is raging at an industrial estate in Manchester following reports of a 'loud explosion' from those nearby.

Flames and large plumes of smoke can be seen rising from Roundthorn Industrial Estate, with emergency responders having been called to the scene just before 9.30pm.

Reports suggest that the smoke is being blown by wind from the site on Tilson Road towards nearby Wythenshawe Hospital, according to Manchester Evening News.

People in the area have been told to remain indoors due to the smoke.

The fire service initially said five engines were at the scene of the blaze, which started at about 9.20pm.

It spread to the first and second floor of the industrial premises.

A spokesperson for Greater Manchester Fire and Rescue Service (GMFRS) said: "At around 9.20pm this evening (February 18) we received reports of a fire at an industrial unit on Tilson Road, Manchester.

"Five fire engines from Wythenshawe, Altrincham, Cheadle and Whitehill fire stations are currently in attendance at the scene, as well as an aerial platform from Stretford.

"Crews arrived quickly and gained access to the property where they found a fire spreading to the first and second floor of the premises.

An update from the fire service has said that the blaze is now under control, with more fire crews deployed, but residents are being advised to remain indoors as there is still plenty of smoke in the air.

GMFRS' update read: "10 fire engines are currently at the scene of a fire involving an industrial unit on Tilson Road, Manchester.

"Crews have brought the incident under control but the fire is still generating smoke, and residents in the area are advised to keep windows and doors closed."