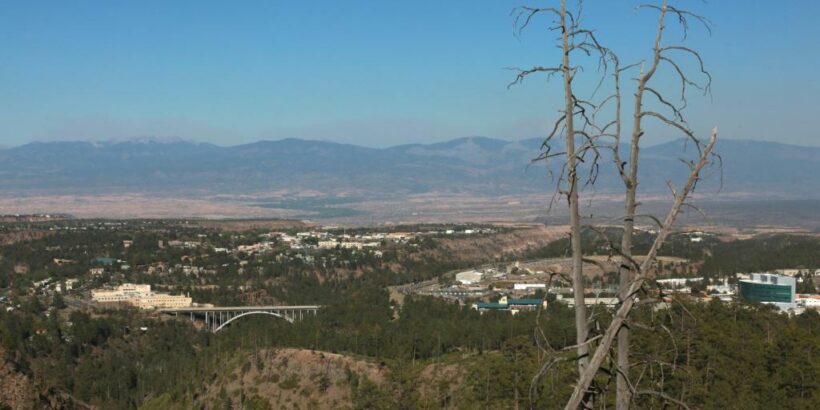 SANTA FE, N.M. — Crews fighting the second-largest wildfire in New Mexico’s history are trying to take advantage of several days of mild winds to gain control over a fire that had charred more than 450 square miles (1,165 square kilometers) by Sunday.

Fire officials said the wildfire grew by about 14 square miles (36 square kilometers) since Saturday night but now was at 36% containment, up from 27% previously.

It was originally forecast that winds would pick up Monday, but fire officials said that likely won’t happen until later in the week.

“We get a small reprieve,” fire information officer Renette Saba said Sunday. “The winds are not strong enough to keep from getting air resources in there. The crews feel they can make good progress on contingency lines.”

Saba said the fire was actively burning on one side only, with the north part going over an old scar area and producing a large smoke plume.

Nearly 2,000 firefighters were battling the 5-week-old fire that threatened the small New Mexico city of Las Vegas for a time before being stopped just outside town in the past week. The blaze has already destroyed at least 473 structures including homes and other buildings.

The governor said the needed response, including immediate funding for debris removal and “a full range of emergency protective measures,” exceeds the state’s capabilities and the federal government should bear 100% of the costs because one part of the fire was ignited by wind-blown embers from a prescribed burn in the Santa Fe National Forest.

Wildfires have broken out this spring across multiple states in the western U.S., including California, Colorado and Arizona.

Predictions for the rest of the spring do not bode well for the West, with drought and warmer weather brought on by climate change worsening wildfire danger.

Nationwide, more than 2,000 square miles (5,180 square kilometers) have burned so far this year — the most at this point since 2018, according to the National Interagency Fire Center.

In Colorado, a fire burning in ponderosa pine and grass southwest of Colorado Springs had grown to 1.8 square miles (4.6 square kilometers) by Sunday and remained 10% contained, fire officials said.

The High Park Fire broke out Thursday about 4 miles (6 kilometers) west of the former mining town of Cripple Creek. The cause of the fire remains unknown.

Crews were doing mop-up work on the northwest and west-southwest edges of the fire on Sunday. At least four helicopters were aiding fire crews on the southeastern edge of the fire, which was burning in steep, rocky terrain with heavy fuels, Pecotte said.

Click markers for details, use buttons to change what wildfires are shown. Map data is automatically updated by government agencies and could lag real-time events. Incident types are numbered 1-5 — a type 1 incident is a large, complex wildfire affecting people and critical infrastructure, a type 5 incident is a small wildfire with few personnel involved. Find more information about incident types at the bottom of this page.