This is the horrific moment a ‘lunatic’ drunk driver crushed a policeman against a parked police van as he tried to flee in a stolen van.

He has now been jailed for four years after admitting grievous bodily harm, aggravated vehicle taking, dangerous driving and driving whilst disqualified. 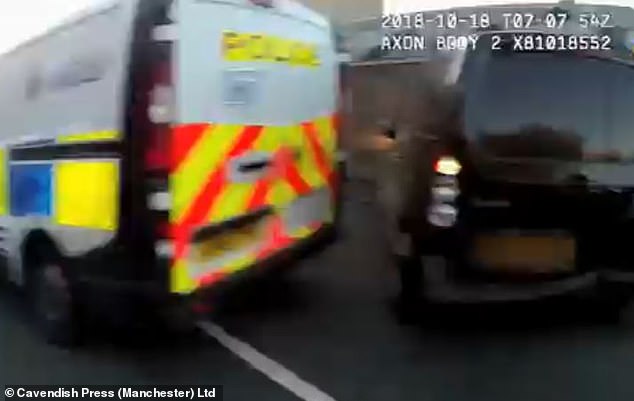 Kane O’Connor, 23, was trying to get his stolen Citroen Berlingo (right) through a police road block in Blackley, Manchester, on October 18 last year

O’Connor had taken the stolen Citroen Berlingo to an all-night house party near a children’s nursery in Blackley, Manchester.

But he tried to make his escape in rush hour traffic at 8am when PC Kerr and his colleagues were called due to complaints about noise and youths kicking a door.

They moved to block in the black Citroen but O’Connor, a father of one who had been drinking vodka aggressively, manoeuvred his vehicle back and forth and drove into PC Kerr leaving him trapped.

Bodycam footage from the officer’s uniform showed him being pinned between the Citroen and the parked police van before O’Connor got through and crashed into an Audi with a mother and child inside before speeding off.

During the incident, O’Connor also ploughed into a silver Mercedes A Class before accelerating and mounting the bonnet of the Audi.

He also reversed into several parked cars and collided with a concrete wall causing it to collapse.

PC Kerr of Greater Manchester Police suffered four inch cut across his knee which required stitches and he was left with significant muscle damage to both legs and swelling.

He was off work for ten weeks and said it was the worst incident he had faced in 16 years on duty. 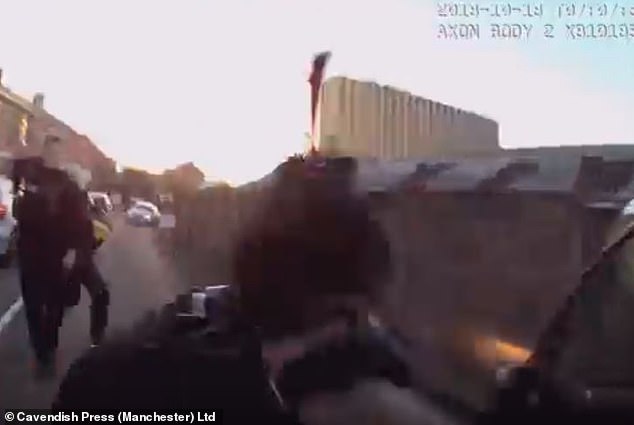 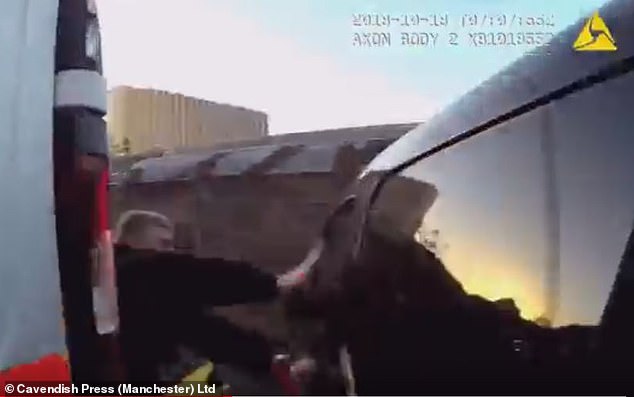 O’Connor did not stop but carried on through a gap, crushing PC David Kerr against a car

In a statement PC Kerr, a father of one, said: ‘The incident resulted in me receiving injuries which at the time I thought would end my career with GMP, the force I joined 16 years ago to help the people of Greater Manchester.

‘The scars I have sustained will be with me for life and will be a constant reminder of the scariest day of my career.

‘I have never felt pain like it before and I got an infection so, as a result, I have lost sleep. This has affected both me and my son. My son doesn’t understand exactly why someone would do this to his father.’

O’Connor, of Withington, Manchester, was arrested later after dumping his van four miles away. Inquiries revealed the vehicle had been fitted with false plates and it was subsequently written off due to the damage caused.

The incident occurred a month after the Citroen worth £7,000 was stolen from outside a cafe and fitted with false plates. 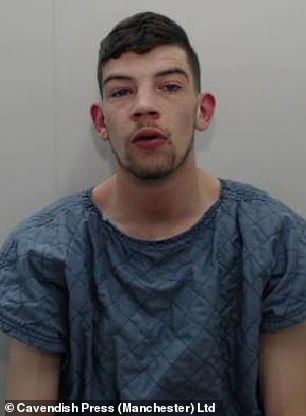 Prosecuting, Gavin Howe, said: ‘PC Kerr, with other officers, were called to a disturbance and when they got there, they bumped into a group of young people outside.

‘There appears to have been a party which got to a noisy stage and there was a complaint.

‘They spoke to the defendant, along with a group of others, and he had a bottle of vodka on him which was half drunk. After the officers spoke to the group, they were allowed to go on their way.

‘But the officers realised the group had arrived in the Berlingo, and the engine was still warm – and they remained in the area to make sure it wasn’t driven away.’

Mr Howe said PC Kerr made a decision to block the van O’Connor was driving, prompting him to ram the vehicle in front in an attempt to get out.

He continued: ‘PC Kerr ran towards the vehicle and it engaged in a number of manoeuvres, including a J-turn, trying to force its way through the vehicles.

‘The Berlingo began striking the parked cars and the officers took out their glass hammers. PC Kerr approached the vehicle with his glass hammer but the Berlingo drove at him.

‘The speed was such that he had no time to get out of the way and it struck his lower leg, pinning him against another car, and he said he had a sensation of pain that he had never felt before. He described his driving as ‘like a lunatic’.

‘A witness noticed the Berlingo drive down the side and scrape the side of cars. He then did a J-turn before crashing into a white Audi. In the white Audi A3 was a woman with her six year old daughter. This witness describes the black van going backwards and forwards.’ 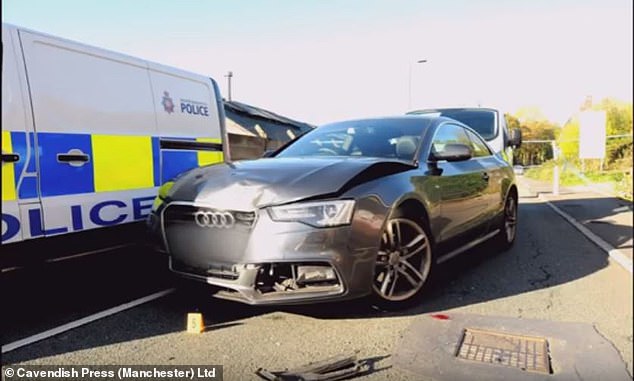 The woman and her daughter were ‘very upset’, Mr Howe said, and they were taken to hospital where medics said they had possible whiplash.

‘The van made its escape, but the officers were able to track down the defendant at 11.45am about four miles from the scene,’ he said. ‘There was a lot of damage and it run into the thousands of pounds.’

In mitigation, defence lawyer David Thompson said: ‘Clearly this is an offence of appalling driving on behalf of the defendant – but while these injuries are significant, they are not the worst.

‘It was blind panic on his part, it was never his intention to cause the injuries that PC Kerr sustained. This defendant is sincerely remorseful.’

But Judge Richard Mansell QC, told him: ‘You were obviously under the influence of alcohol and you did everything you could to get out of his situation in a highly dangerous manner.

‘You drove and pinned PC Kerr between your vehicle and another parked car and his life must have flashed before him in that moment. Miraculously, his leg was not broken and he was back in work after ten weeks off but he has endured both medical damage and psychological stress.

‘The timing of this offence, during rush hour, and that it was in a residential area are aggravating factors. But the most serious factor is that you did this to a police officer in his duty trying to prevent you from committing these offences.’ 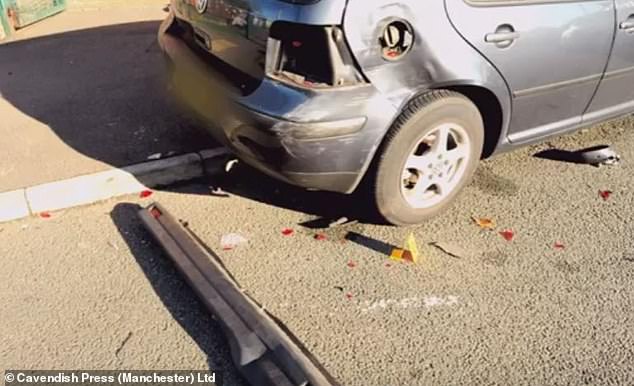 O’Connor was also additionally banned from driving for three years.

Detective Constable Terry Macmillan, of Greater Manchester Police said after the hearing: ‘O’Connor was incredibly reckless as he manically drove at anything in his way, showing absolutely no regard for the safety of others.

‘The incident unfolded outside a busy nursery at peak time but miraculously no-one else was seriously injured. The mother who was inside the Audi at the time was understandably left incredibly shaken and her child had to be checked over at hospital.

‘My thoughts remain with our injured colleague as he recovers from this horrific ordeal at home with his family and I can only commend his incredible bravery throughout this entire process. I also want to recognise the innocent people who were sadly caught up in his rampage and those who had to witness it.

‘I firmly believe that O’Connor is where he deserves to be – locked away behind bars where he can’t mindlessly hurt anyone else.’