Luxembourg is set make all of its public transport free in a world first, it has emerged.

Trains, tram and bus fares will all be lifted from 2020 in the 999 sq mile European nation, under ambitious government proposals.

The plan is part of a fresh environmental drive under the administration of Luxembourg Prime Minister Xavier Bettel after his liberal-led coalition secured a narrow victory in an election in October. 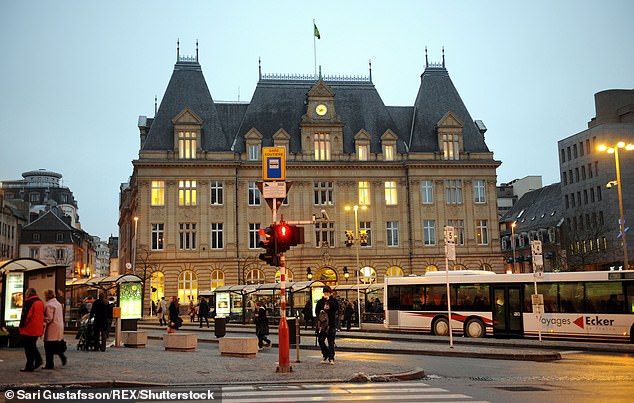 Luxembourg is set make all of its public transport free in a world first, it has emerged. The capital, Luxembourg City (file picture), suffers from chronic traffic congestion

The country’s capital Luxembourg City, suffers from chronic traffic congestion despite being home to just 110,000.

Some 400,000 commuters flock to the city for work while 200,000 from neighbouring cross the border France, Germany and Belgium every day.

The free fares plan is the latest step in encouraging citizens to use public transport.

There is already free transport for under 20s while secondary school students can use free shuttles between schools and their homes.

Currently, commuters pay just £1.78 for two hours of travel – but even this low fare will be scrapped under the plan.

The finer details of the proposal are still to be determined – including what to do about first and second-class carriages on trains.

Bettel was sworn in for a second term on Wednesday.

The foreign policy of the European Union’s wealthiest but second smallest state is unlikely to change much, with Jean Asselborn keeping his post as foreign minister while Pierre Gramegna remains finance minister in the new administration.

Bettel’s Democratic Party, the Socialist Workers Party (LSAP) and the Greens, who have together ruled the Grand Duchy since 2013 signed a new accord until 2023 on Monday and settled ministerial posts on Tuesday.

The Christian Social People’s Party (CSV) – which was led for 19 years by EU chief executive Jean-Claude Juncker – remained the largest party in parliament, but lost seats, as did the LSAP and the Democratic Party.

However, because the Greens gained, the three parties in government have 31 seats in the 60-seat chamber.