‘If you don’t open your safe I’ll go upstairs and kill your kids’: Machete gang burst into dentist’s £1.6m home and threatened to murder his babies if he didn’t give them his designer watches and jewellery

A millionaire dentist and his wife yesterday spoke of their terror after machete-wielding thieves broke into their home and threatened to kill their young children.

Dr Kailesh Solanki, 38, and his wife, Michelle, 30, became the latest victims of ‘wild west Britain’ when two men – wearing balaclavas and armed with a machete and hammer – broke into their £1.6 million luxury property in Bowdon, Cheshire, last week.

During six terrifying minutes, one screamed: ‘If you don’t open your safe I’ll go upstairs and kill your kids.’ 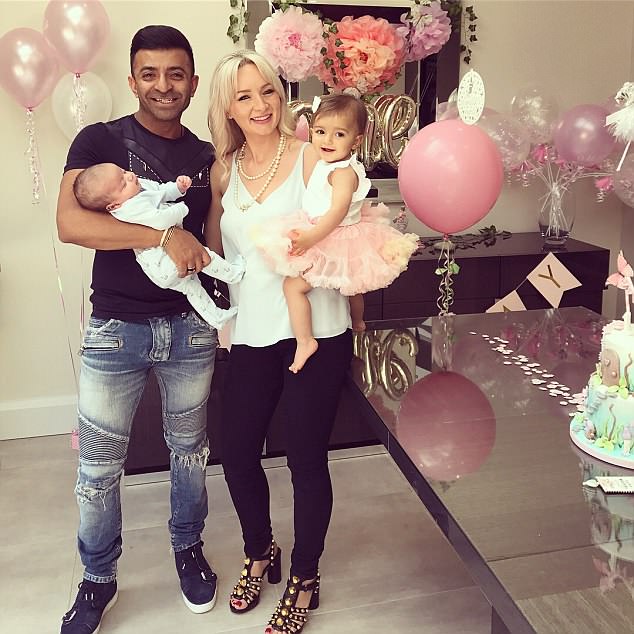 Pictured: Dentist Kailesh Solanki and his 30-year-old wife Michelle with their two children

The robbers stole £200,000 worth of designer watches, handbags, sunglasses and jewellery, including Mrs Solanki’s diamond wedding and engagement rings.

Last night Dr Solanki told the Daily Mail: ‘They smashed through the patio windows and ran towards me. One had a machete, the other had a hammer and they were both dressed in black with balaclavas and gloves. I just froze. They took jewellery and a watch off me.’

Mrs Solanki said she was terrified they would harm the couple’s children, ten-month-old Dylan and 21-month-old Jasmine, who were asleep upstairs.

She said: ‘I just thought, “this is it”. That feeling will stay with me for life. When one of them said he’d kill the kids I said to him, “they are just babies”.

‘The man with the machete grabbed my hand and took my wedding and engagement rings and my watch. He wouldn’t let go of me.

‘At one point, one said, “leave her, she’s actually shaking”. I was numb. If they had told me to cut my arm off and my kids would be OK, I’d have done it.’

The raid happened just before 10pm on Bank Holiday Monday on May 28.

But the couple believe the thugs were also at the address at 11pm the previous Thursday. 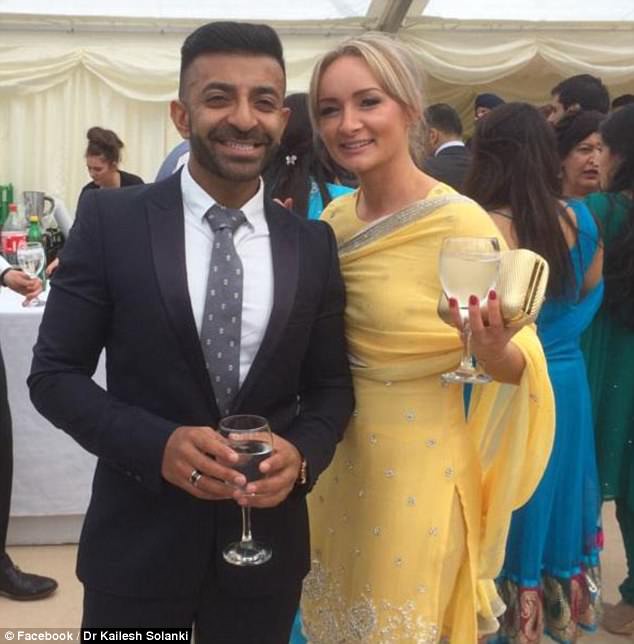 They spotted two men on their CCTV cameras and switched on all the lights before calling police and their private security company. They arrived within minutes and the men left.

Dr Solanki, who runs Kissdental, a private dentistry business with clinics across the Manchester area, said he managed to dial 999 after hearing the thugs smash the patio doors, before he was ordered to open the family safe.

‘I didn’t know what was in there,’ he added. ‘I was just throwing it into a bag. You are just scared. They were very loud, right in our faces.’ The couple have since bought a German shepherd for protection.

Dr Solanki, who owns several expensive sports cars, including a Ferrari, added: ‘I was brought up on a council estate and I went to a state school.

‘I wasn’t born with a silver spoon in my mouth.

‘But I went to university and worked hard to make a success of my life. I work 70 to 80 hours a week and I like to enjoy some of the finer things in life. 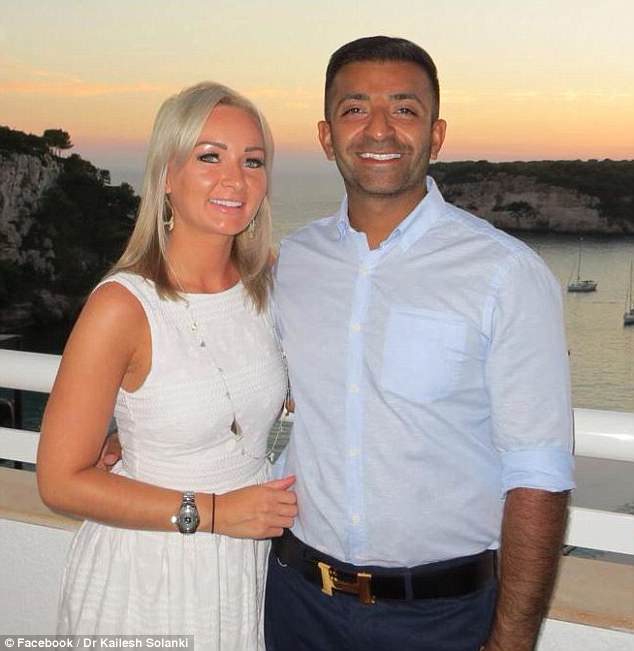 Dr Solanki, who owns several expensive sports cars, including a Ferrari, added: ‘I was brought up on a council estate and I went to a state school’

‘Then you get people like this who are not willing to educate themselves and just want to take things by force. I don’t want to change who I am, but my view of life has altered.

‘I’m thinking, should I sell my cars, or stop buying nice watches, because I’m putting my family at risk.’

‘We are following a number of lines of enquiry and are appealing for the public to help us catch these dangerous criminals.’ 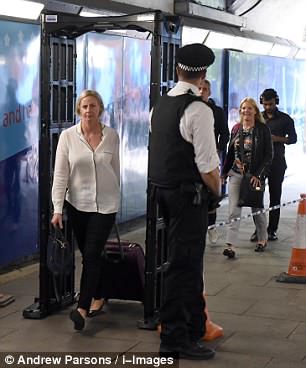 Commuters were forced to go through weapon-detecting ‘knife arches’ yesterday

Commuters were forced to go through weapon-detecting ‘knife arches’ yesterday as part of a police crackdown on violence in London.

According to rail workers, it is the second time in two weeks that police have set up metal detectors at major rail stations, which officers say will ‘disrupt’ young thugs.

The arches, which have also been used to target knife crime in troublesome schools recently, can detect weapons through a person’s clothes.

But the technology’s effectiveness was called into question last night as one bystander revealed to the Daily Mail that he passed the barrier with a five-inch Stanley knife in his pocket.

The man, who did not want to be named, was required to have the knife for work, but said: ‘Because the outside is plastic it did not go off.’

A team of ten police officers were stationed in the archway leading towards Vauxhall Underground and mainline rail stations, in south London, between 2pm and 6pm yesterday. 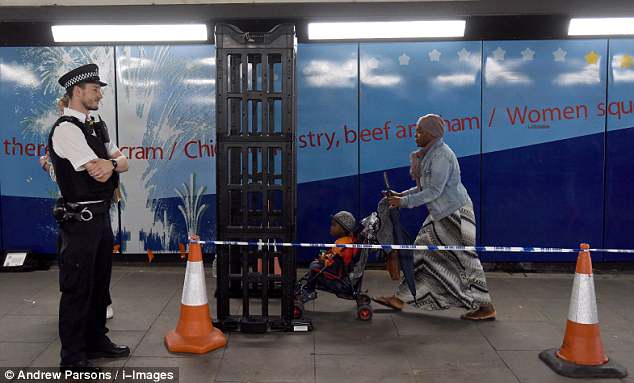 According to rail workers, it is the second time in two weeks that police have set up metal detectors at major rail stations, which officers say will ‘disrupt’ young thugs 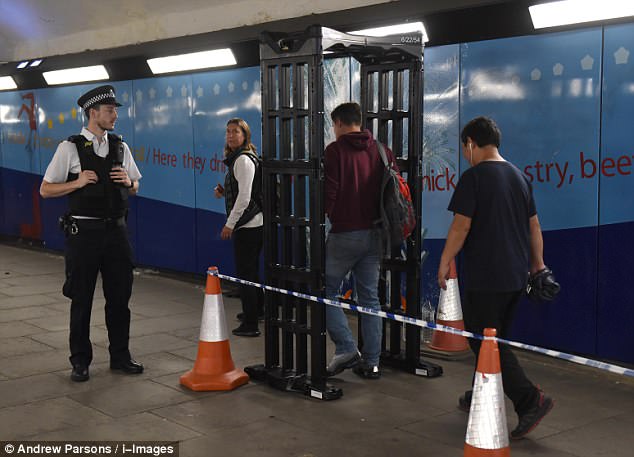 The arches, which have also been used to target knife crime in troublesome schools recently, can detect weapons through a person’s clothes

Onlookers said police waited by the detectors, ready to catch unsuspecting travellers. It is not known how many arrests were made.

A spokesman for the Metropolitan Police said: ‘We are committed to tackling knife crime and use a number of tactics to disrupt young people who wish to carry knives.

‘The use of knife arches at key locations is a tried and tested tactic.’

In the South London district of Croydon, police installed an arch at the entrance to a McDonald’s fast food restaurant earlier this year, and said the initiative was ‘very successful’.

Croydon borough commander Jeff Boothe said at the time: ‘When we first started putting up knife arches, we were going into schools and colleges and trying to persuade them of the benefits. Now, businesses and educational facilities are coming to us and saying they would really like to work with us on something similar.’

At least 37 people have been fatally stabbed in London this year.

This is the moment an armed thug jumps on the bonnet of a driver’s car at traffic lights and starts smashing the windscreen.

Dashcam footage captured the moment two mopeds carrying four men rode up on either side of the car and began kicking its windscreen on a busy road in Finchley, north-west London. 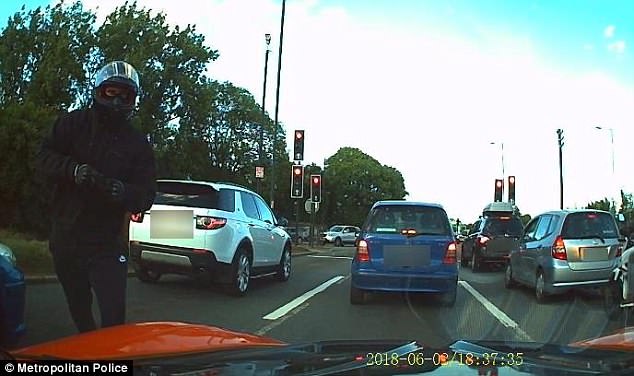 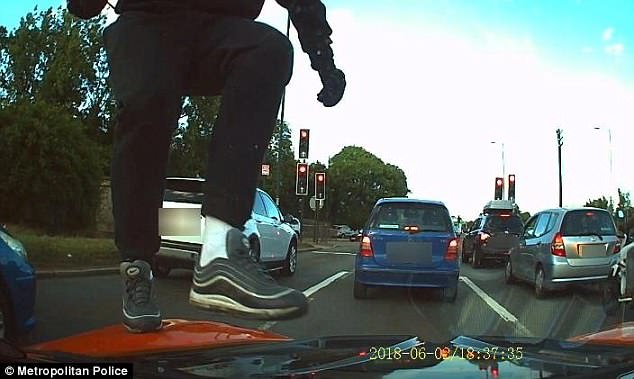 Shocking images of the robbery have been released by the police. One of suspects can be seen jumping onto to bonnet

One suspect was brandishing a hammer and the other a large zombie-style knife.

The driver of the Mazda RX5, a 27-year-old man, needed hospital treatment after being slashed by the knife.

The raiders stole a Fossil watch and an Audermars Piguet Royal Oak watch, which can cost £100,000, before fleeing on their mopeds at 6.30pm on Saturday.

Detective Constable Oliver Kotis said no one had been arrested over the ‘shocking attack’.