Corner shop owner, 56, is left covered in blood after machete-wielding gang bursts into his store and snatch £15k cash in horror attack

A grandfather was left covered in blood after a gang raided his shop and slashed his hands and neck with a machete.

Saeed Ahmed, 56, needed surgery for a severed artery in his hand after the brutal raid at Pound Box on Cheetham Hill, Greater Manchester.

His son Tehsin Naqash was also hit over the head during the terrifying incident on Tuesday afternoon. 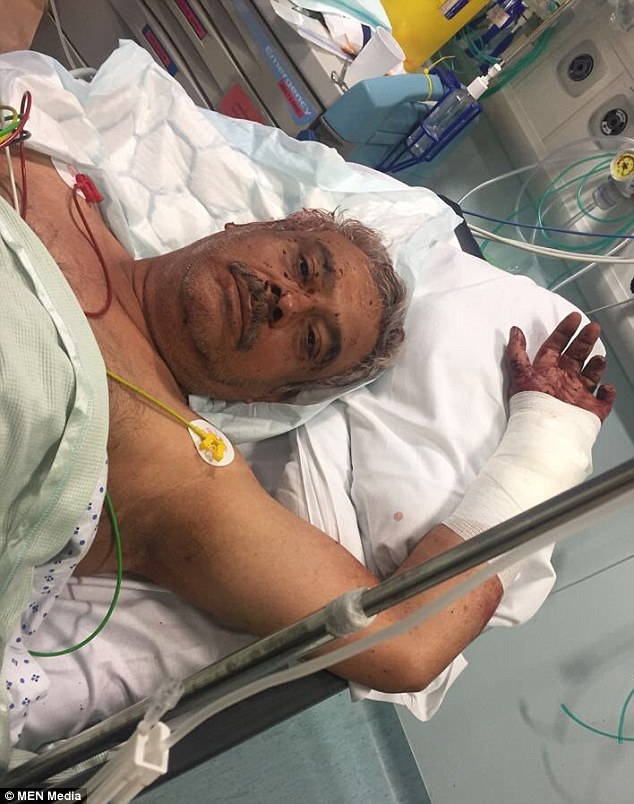 Grandfather Saeed Ahmed, 56, needed surgery for a severed artery in his hand after the brutal raid at shop Pound Box on Cheetham Hill, Greater Manchester

The family say what happened was ‘a tragedy’ and have handed the images to the M.E.N to help appeal for witnesses and catch the gang responsible.

Three men stormed into the Western Union money transfer business at around 3.15pm.

They hit Mr Naqash at the back of his head, knocking him to the floor.

Another two of the men cut Mr Ahmed’s hands and neck with a machete, severing an artery in one hand.

The trio fled the scene with around £15,000 cash and several men could be seen driving away from the scene.

Mr Naqash called for an ambulance, but became fearful his dad was bleeding heavy and flagged down a friend driving past outside to take him to hospital.

Mr Ahmed, who has five children and one granddaughter, has since been transferred to Wythenshawe Hospital and is due to undergo surgery for a severed artery on Wednesday.

Mr Naqash, 28, said: ‘All of us were just sitting in the shop. It was 2pm in the day just before it happened.

‘We were in the shop and three guys came in. One of them hit me on the head, the other two went after my dad.

‘They hit him in the face. They hit us both over the head and my dad’s artery in his hand has been cut. 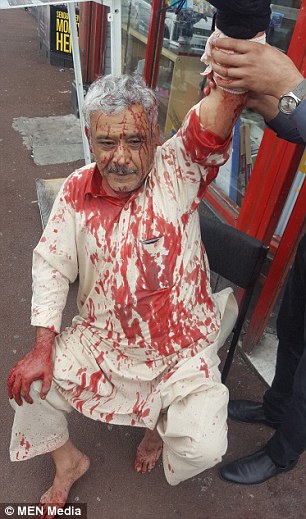 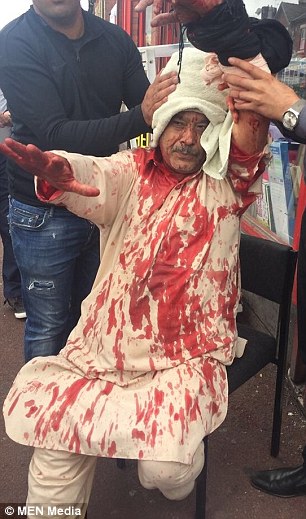 Mr Ahmed receives help outside his shop shortly after the gang raided his shop. His son Tehsin Naqash, who was hit over the head and knocked to the floor in the incident, described his father’s injuries saying his hands and neck were slashed and an artery in one hand was severed

‘He couldn’t move two of his fingers. They have to operate and repair that.

Tehsin’s younger brother Haris, 20, added: ‘My dad’s shop has had this before, but this time it’s worse. We don’t know why this has happened, it’s a tragedy.’

Police are now searching for the robbers.

Detective Inspector Andy Buckthorpe, of GMP’s City of Manchester Division, said: ‘This robbery took place in a busy shopping area in broad daylight – someone must have seen the men in the lead up to this terrifying incident.

‘While this man recovers from his serious injuries, our team of detectives are following a number of enquiries.’ 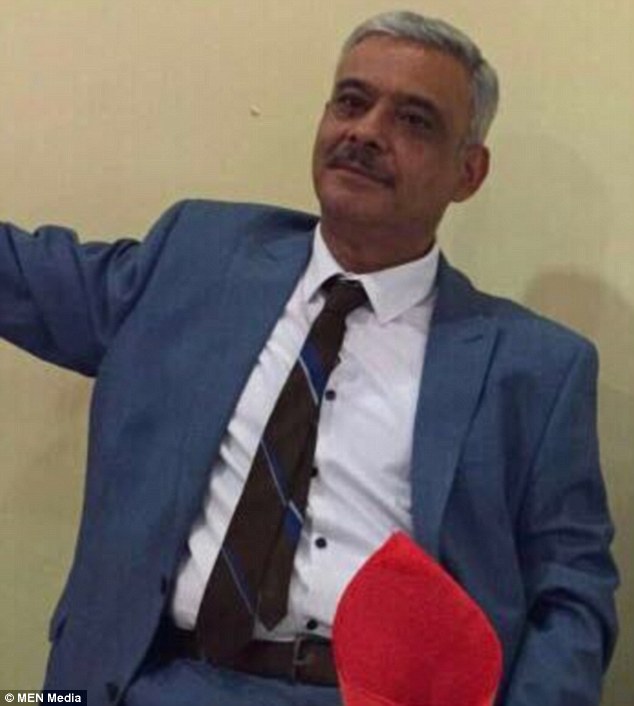 Father-of-five Mr Ahmed (pictured) cannot move two of his fingers, but they will be operated on to try and repair the damage 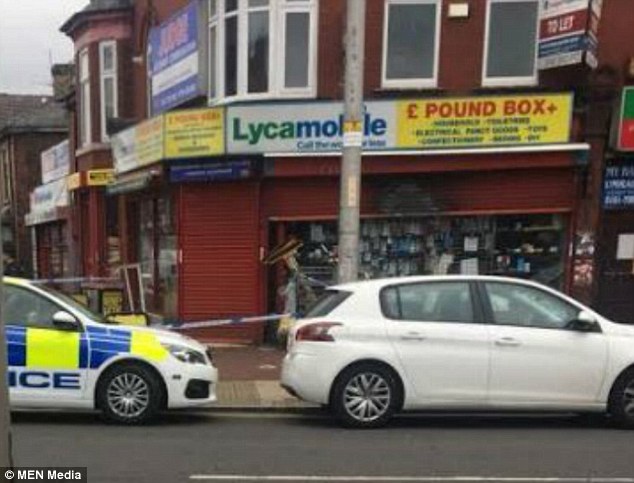 The trio fled with around £15,000 in cash and several men could be seen driving away from the scene. Greater Manchester Police are investigating and have appealed for information

A GMP spokesman added: ‘At around 3pm on Tuesday 14 August 2018, police were called by the ambulance service to reports of a robbery on Cheetham Hill Road.

‘Three offenders had gone into the shop with a weapon, assaulted two people inside, before stealing a large amount of money from inside.

‘They are believed to have fled in a silver car.

‘A man in his 60s was left with serious injuries and was taken to hospital for treatment, where he remains.

‘Enquiries into the full circumstances around this incident are ongoing.

‘You will see officers in the area this evening and for the remainder of this week, and I’d encourage anyone with information to speak to them directly.