‘We’re here to rob you’: Terrifying moment machete-wielding moped thugs threaten doctor, 46, in driveway of his north London home saying ‘Give us the watch or we’re going to kill you’

Chilling footage shows the moment a doctor was robbed on his own driveway by machete-wielding moped muggers who shouted: ‘Give us the watch or we’re going to kill you’.

The robbers – whose faces were obscured by their cycle helmets – walked brazenly up to the man in Edgware, north London and told him ‘we’re here to rob you’ before taking his watch and phone.

The victim, 46, said he was just getting out of his car after returning home from work when the robbers struck. His wife and children were just yards away inside the family home.

The shocking attack comes amid of wave of moped robberies around London, with comedian Michael McIntyre becoming the most high-profile victim earlier this month. 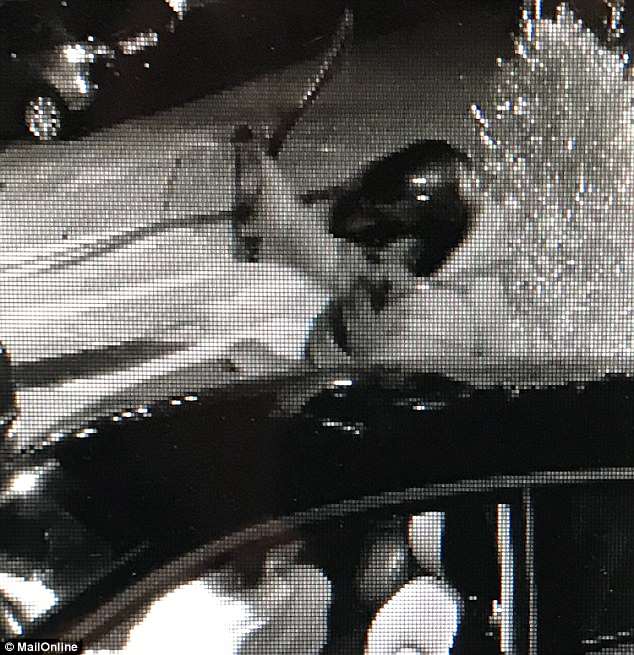 CCTV shows the moment one of the yobs raises his machete and slams it on the roof of the car, as the other jostles with the driver for his watch.

The watch was actually a fake, as the victim had become so concerned about robberies in the area, he had stopped wearing his real Rolex. He says he has now stopped wearing a watch altogether.

The victim, who asked not to be named, told MailOnline: ‘I drove into my driveway and took the key out. The door unlocked automatically and someone text me so I was taking a look at my phone.

‘At the corner of my eye I saw a biker, I thought it was a delivery man but he opened the door of my car and then he grabbed me and I didn’t realise I was being robbed.

‘Then the second came along guy. The whole thing was only 45seconds. They said: “We’re here to rob you, give us the watch or we’re going to kill you”.

‘I just took the watch off. Then they said “who you on the phone to – we want the phone”.’ 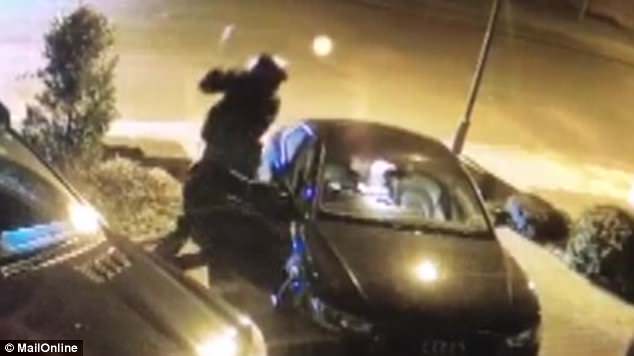 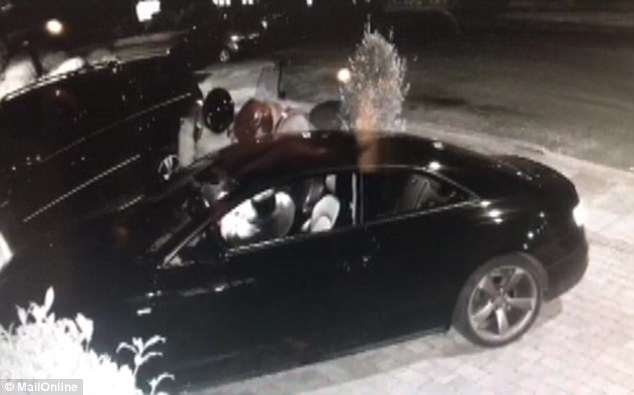 Shocking figures reveal there are more than 60 moped thefts a day on London’s streets.

Moped or motorbike-enabled crimes were up 50% on the last 12 months, figures published this month reveal.

Separate statistics reveal 86 per cent of robberies and 78 per cent of burglaries in the UK went unsolved last year.

The victim added: ‘After I gave the watch one guy walked off and the other took my phone which they later threw in the bushes.

‘They then said give us your wallet and I froze, he lifted the machete and hit the top of my car to frightening me.’

The February attack, just one of an apparently endless series of moped crimes in the capital, took place around three miles from where comedian Michael McIntyre suffered a similar robbery. It is not known whether the incidents are linked.

The victim hit out at the moped thieves plaguing the capital, as he often deals with their victims through his work as a doctor. 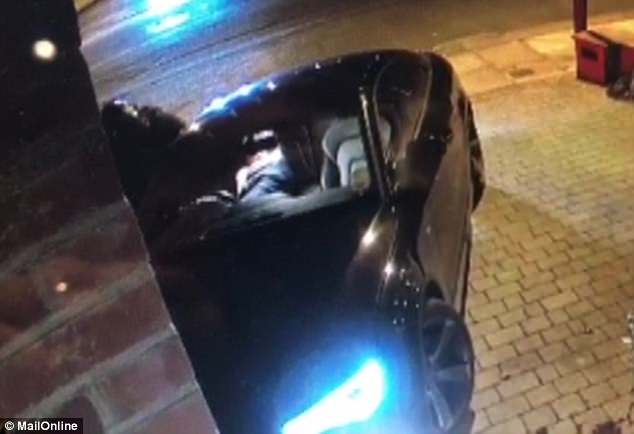 Rules on police chasing crooks are being changed to give officers more confidence to pursue violent moped criminals who throw off their helmets.

Ministers want to smash the ‘myth’ that officers cannot chase helmetless riders in case there is an accident and the thugs are killed or suffer major injuries.

Police Minister Nick Hurd acted amid concerns police were finding themselves in the dock over high-speed chases as they can be prosecuted for dangerous or careless driving like any other motorist.

Under Government proposals, the rules will be tweaked to recognise police drivers’ high level of training.

He added: ‘It was in my own home, own drive, it was really upsetting. My wife and children were really upset. The moped guys were British with London accents.’

He added: ‘I don’t wear a watch now, I don’t carry a wallet, I don’t even carry credit cards anymore – just a bit of cash.

‘I took my daughter to a party recently and the majority of the mums don’t wear their engagement rings any more or even jewellery.’

As part of his work he sees women who have fractured fingers from robberies of their engagement rings.

He added: ‘The lady who lives opposite me was recently attacked too when she went to drop the kids off to school and had her engagement ring pulled off. ‘

After Michael McIntyre was attacked, a 24-year-old woman was left with head injuries when her bag and phone were stolen.

Shocking dashcam footage then showed moped thieves robbing a motorist on the nearby North Circular road. Police have previously said those three attacks were not linked.

The spotlight was thrown on moped crime following a spate of acid attacks and robberies last year, including one attempt to steal the phone of former Chancellor George Osborne.

The apparent impunity with which gangs stole mobile phones, wallets and watches from victims led to police vowing a crackdown on the crimes.

But a steady stream of shocking offences has continued into this year, with every region of the capital being affected by the crime plague.

The map below shows just some of the attacks reported so far in 2018. 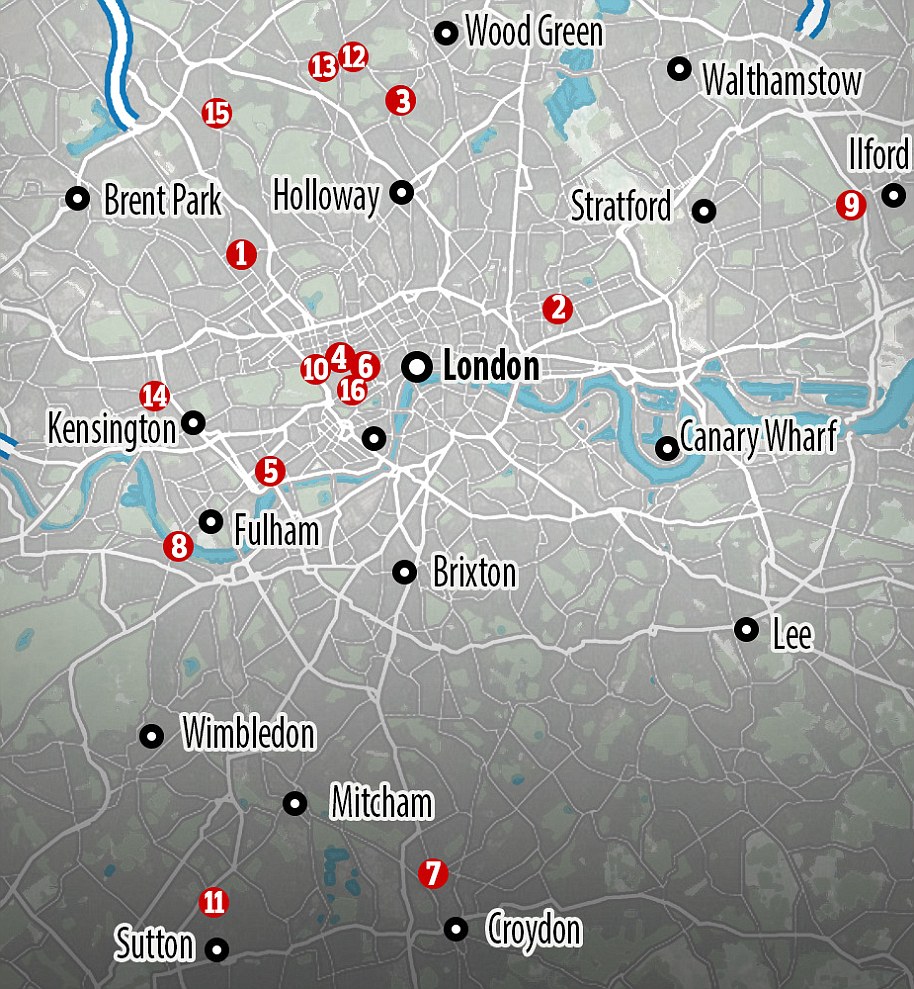 3. January 29 – Members of the public, including an 80-year-old grandmother, intervene when would-be robbers attempt to steal the moped of a man in Crouch End.

4. February 4 – Man is stabbed after he fought back against moped robbers in Oxford Street.

5. March 7 – Investment banker tackled moped thief to the ground after hearing him breaking into his car outside his apartment in Beaufort Street, Chelsea.

7. March 21 – Simon Jordan, the chairman of Crystal Palace Football Club, is robbed of his £100,000 watch by moped thieves in Sumner Road, Croydon.

9. April 5 – Delivery driver is dragged from his moped and stabbed during a brutal attack in Ronnie Lane, Manor Park. Group of teenagers make off with his bike.

11. April 19 – Two men on a motorbike armed with a machete confront 17-year-old on Marlborough Road, Sutton and steal his moped.

13. May 10 – Masked youths on three mopeds drove at parents on the school-run in The Avenue, Muswell Hill in attempt to rob them.

14. May 11 – Courier is forced to fight off two would-be motorbike thieves after they attacked him in a side street in Shepherd’s Bush.

15. June 4 – Comedian Michael McIntyre is robbed of his watch as he sits in his car in Golders Green.

16. June 5 – Members of the public intervene to tackle gang of robbers raiding a watch shop on Regent Street.