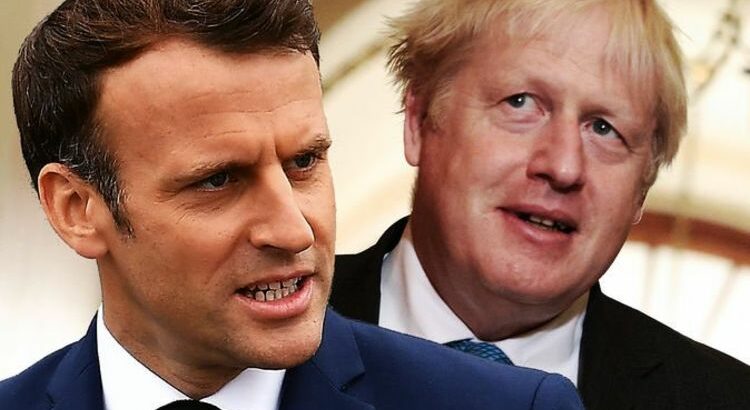 Johnson tells Macron to 'get a grip' over Aukus submarine deal

French newspapers have been dominated by the possible ramifications of the phone call between French President Emmanuel Macron and his US counterpart Joe Biden. Several of the headlines contained the word “apaisement” – a “false friend” that translates as “soothing” rather than appeasement – to describe the apparent easing of tensions between France and the US following fury from Paris over losing the submarine “deal of the century”. Le Monde asked: “Game over or mere respite?” in its morning piece, reporting Mr Macron is hopeful the 30-minute chat would “kickstart his European agenda” – particularly around a push for greater EU defence and strategic autonomy approaching the presidential election next April.

The French daily newspaper said although tensions may have eased slightly, the call is unlikely to force Mr Macron into breaking his self-imposed silence since the “major diplomatic crisis” erupted just over a week ago.

Political rivals have raged losing the submarine contract is further evidence of “France’s decline on the global geopolitical stage,” but Le Monde said the French President – who was in a “dark rage” over the affair, “will likely remain mute, claiming thus to embody a ‘responsible’ head of state who is not governed by his emotions”.

But conservative daily Le Figaro was an exception to much of the reaction from the French media and took the unprecedented step of claiming the UK’s part in the submarine deal is Boris Johnson’s “first victory for Global Britain”.

The newspaper reported fury from France over the UK jumping ahead of it in the submarine contract had cast a “chill” that “is serious and could leave marks”.

Le Figaro warned: “The coming weeks will tell whether French anger will ‘trickle down’ as well onto Brexit negotiations.

“France, often assigned the role of bad cop in the divorce saga with the EU, may not be inclined to leniency in upcoming talks.

“Trust, already fragile, is no longer there.”

In response to what Mr Macron would have gained out of his call with Mr Biden, several French newspapers reported opinion is split about the US President’s recognition of the “importance of a stronger and more capable European defence” as a complement to NATO.

Le Figaro said if only for “lancing this boil”, the call “was already important”.

The French daily claimed: “If these proposals are put into place, Emmanuel Macron, who has made developing European defence the cornerstone of his international policy, will come out of this ahead.”

But Le Monde took a step back and warned Mr Macron faces a huge fight to convince “numerous” EU countries, particularly in central Europe, “used to living under the American umbrella”.

La Parisien cited an unnamed minister as conceding that French pique had reached its limits, and ran with the headline: “A phone call, and now what?”

The minister conceded: “Frankly, bar getting cross, what can France do in this affair? Nothing. Our levers are very weak.”

In contrast, a member of the minister’s LREM party told Le Figaro: “It’s not good for his image as head of state and his ability to get his way.

“It’s not good for Europe. It’s a diplomatic problem and yes it’s a political problem.”

The newspaper warned of the huge damage of the row to his popularity in the lead-up to the crunch presidential elections in April 2022, particularly as the economic fallout from the lost naval contract “appears, for now, to be limited”.

Pierre Eric Pommelet, the boss of French sub builders Naval Group, said: “All the lights were green” when Australia pulled the plug in “unprecedentedly brutal fashion” last Wednesday via a conference call.

He added “All the conditions were in place for the programme to go to the next stage” that very morning.

In a further blow to Mr Macron, the Naval Group boss warned his company would be sending its bill for “costs already committed” as well as additional dismantle infrastructure in place “in the coming weeks”.

The firm also intends to ensure its contractual rights are respected “to the letter”.