Three out of four Germans think Merkel will FAIL to meet deadline to solve migrant crisis as Chancellor takes a swipe at Trump’s tweets, saying: ‘Our crime stats speak for themselves’

Three out of four Germans think Angela Merkel will fail to meet a deadline to find a Europe-wide solution over the migrant crisis, a survey has found.

The German Chancellor is facing a race against the clock to save her political career after her coalition partners threatened to start turning away migrants who have already been registered in other EU states.

But a survey has found that 74.7 per cent of Germans do not believe she will be able to reach a solution that will be acceptable to her CSU allies within a fortnight.

It comes as Merkel took a swipe at tweets written by US President Donald Trump, who asserted that migrants were behind a surge in crime in Germany. 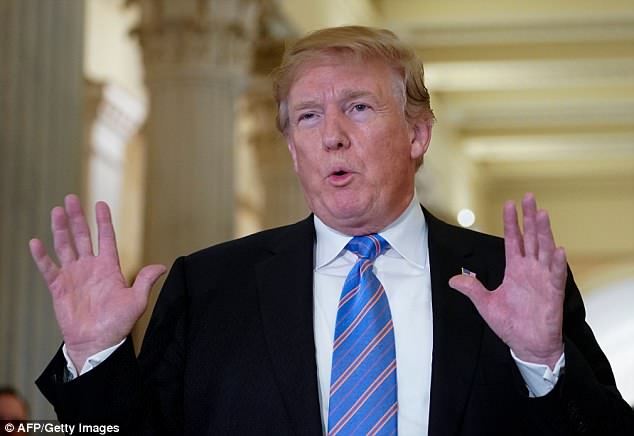 Merkel has taken a swipe at tweets written by US President Donald Trump (pictured), who asserted that migrants were behind a surge in crime in Germany 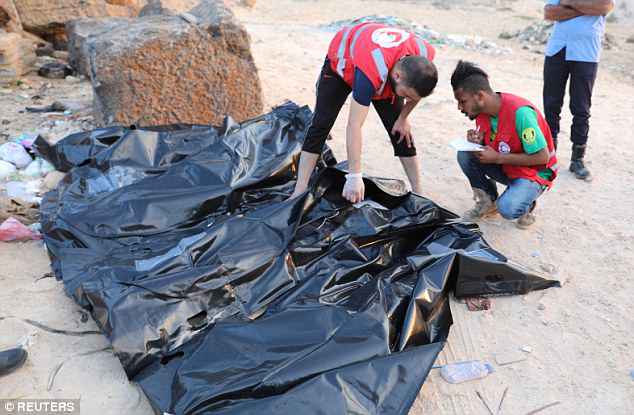 Merkel has been given an ultimatum by her coalition partners to come up with a solution to the migrant crisis. Pictured: Rescuers cover the dead bodies of migrants found on the coast of Libya

The Chancellor coolly rebuffed Trump by pointing to statistics that showed crime was in fact down.

‘My answer is that the interior minister presented the crime statistics a short while ago and they speak for themselves,’ Merkel told a news conference with French President Emmanuel Macron when asked about a recent flurry of tweets from Trump.

‘We are seeing a slight positive development. We must always do more to fight criminiality. But they were very encouraging numbers,’ she added.

A government-sponsored study published in January showed that violent crime had risen about 10 percent in 2015 and 2016, attributing more than 90 percent of the rise to young male asylum seekers.

Merkel has faced opposition at home for a decision in 2015 to open Germany’s borders to hundreds of thousands of migrants, mostly Middle Eastern asylum seekers who crossed by sea from Turkey to Greece and overland through the Balkans. That route has since been closed under a 2016 deal Turkey-EU deal.

In a tweet on Monday, Trump said that the people of Germany were turning against their leadership because of loose migration policies.

‘Crime is way up. Big mistake made all over Europe in allowing millions of people in who have so strongly and violently changed their culture,’ Trump said. 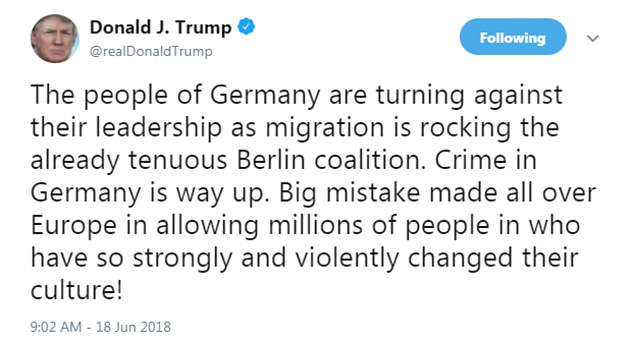 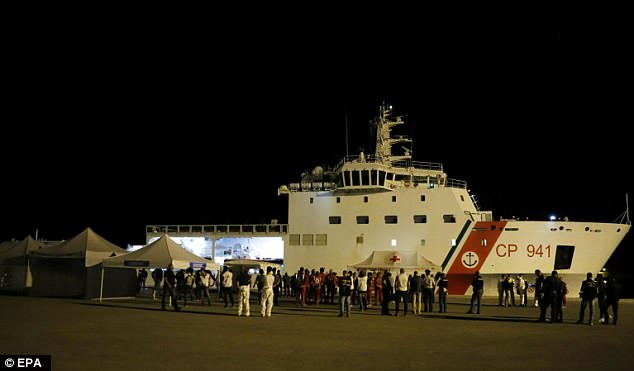 The question of how many migrants the bloc can absorb came back to the fore strongly when last week Italy and Malta both turned back a rescue vessel carrying 630 refugees, which was eventually accepted by Spain. Pictured: A rescue ship arrives in Sicily on Tuesday

He followed that up with a tweet on Tuesday that said: ‘Crime in Germany is up 10% plus (officials do not want to report these crimes) since migrants were accepted. Others countries are even worse. Be smart America!’

European Commission President Jean-Claude Juncker said it was ‘not the American president’s role to speculate – as he did yesterday – that the German people would march towards the chancellery to remove Mrs Merkel.’

Meanwhile, France and Germany yesterday pushed to return asylum seekers to the EU country where they arrived – as Merkel continued to face a coalition revolt over the migrant crisis.

Macron said France and Germany are seeking deals with frontline states in Europe’s migration crisis to return asylum seekers to the EU country where they were first registered, usually their point of arrival.

‘France and Germany will ensure that those who are registered in a Schengen zone country can be taken back as quickly as possible to the country where they have been registered,’ he said, vowing to achieve this through bilateral and multinational agreements.

Greece and Italy will be the hardest hit by the plans – as Greece has seen a massive influx of migrants fleeing the Syrian war while Italy has become the main gateway for African migrants through Libya. 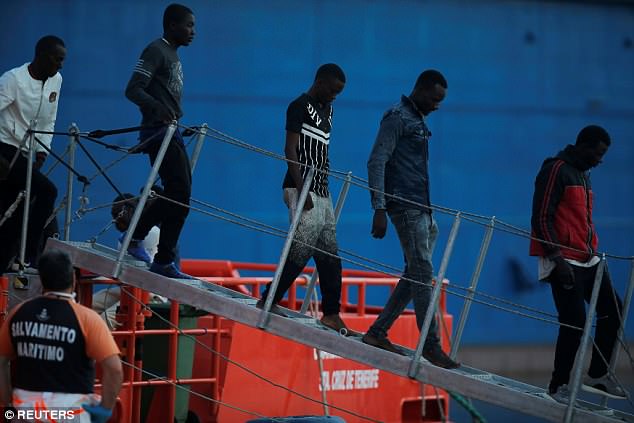 Merkel faces a dangerous mutiny from her hardline Bavarian Interior Minister Horst Seehofer, who has vowed to defy her and order police to shut German borders to most asylum seekers by early July if there is no EU accord

Despite yesterday’s developments, a majority of Germans still remain unconvinced that Merkel will be able to appease her coalition partners with a Europe-wide solution within two weeks, a survey of 5,038 found.

The survey by pollster Civey for newspaper Die Welt, found just 18.1 percent said they trusted Merkel to deliver an agreement that was acceptable to her CSU partners within a fortnight.

Horst Seehofer, CSU leader and Germany’s interior minister, wants to turn away migrants who have already registered in other EU states but Merkel opposes any unilateral move to reverse her 2015 open-door policy and undermine her authority.

Hardline ally in new attack against Merkel over eurozone budget

Chancellor Angela Merkel’s hardline allies have taken aim at her backing for a new eurozone budget, German media reported, opening up another front in their attack against her.

Merkel’s Bavarian sister party CSU had on Monday already given her an ultimatum to curb migrant arrivals or risk pitching Germany into a political crisis that could rattle Europe.

But the CSU now also take issue with an agreement announced Tuesday by Germany’s and France’s leaders to set up a common budget for the eurozone which will fund investments in poorer member states. 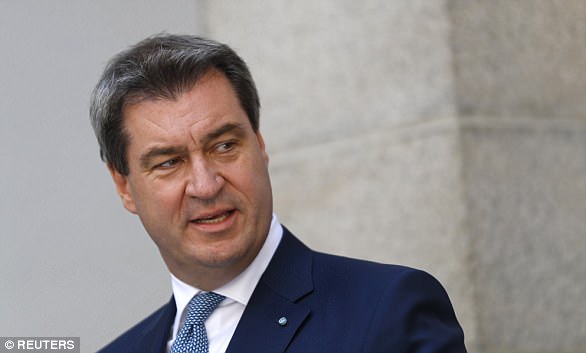 ‘Is it separate from the German legislature? Does it mean that the fundamental stability of the euro will be challenged? All that must be clarified,’ he said.

Ahead of a meeting with Austrian Chancellor Sebastian Kurz in Linz on Wednesday, Soeder confirmed that his party will call a coalition panel to examine the issue.

Germans are deeply opposed to any ‘transfer union’ that sees their taxes flowing to eurozone laggards.

And Merkel herself had initially appeared lukewarm to the idea of a budget for the bloc.

But she has since offered a key concession in backing French President Emmanuel Macron’s call for such a fund.

However, she said in a recent interview that the total sum should be at the low tens of billions range – far less than what Paris had hoped for.

The CSU’s attack on the eurozone reform proposal came in a week already marked by a deep rift between the Bavarian party and Merkel over her liberal refugee policy that allowed more than a million asylum seekers to enter Germany since 2015.

Merkel’s decision had proven divisive, and voters in September’s elections handed her her poorest score ever and gave seats for the first time to the far-right anti-Islam AfD.

But he pointed to comments from Seehofer that preparations would be made in case Merkel was unsuccessful so the federal police could reject migrants who have registered elsewhere from the first week of July.

‘This is necessary. We can no longer look on as this refugee tourism across Europe happens,’ Herrmann said.

He added that rejecting from July 1 migrants who have already registered in other EU countries would be legal: ‘It’s the existing law.’

Volker Kauder, head of the CDU/CSU parliamentary group, warned Germany against taking unilateral action on refugee policy, telling broadcaster ZDF: ‘I believe that in the end we can only solve the problem with our European neighbours and not by going it alone.’

He expressed optimism that Merkel would manage to seal deals with European partner countries to take back refugees.

Austrian Chancellor Sebastian Kurz is likely to meet Merkel and other European leaders this week to discuss migration, he said on Wednesday.

The question of how many migrants the bloc can absorb came back to the fore strongly when last week Italy and Malta both turned back a rescue vessel carrying 630 refugees, which was eventually accepted by Spain.

The move sparked a clash between France and Italy as immigration also triggered a domestic crisis for Merkel, a leader already weakened by her decision in 2015 to keep open German borders to a mass influx of more than one million refugees.

Merkel now faces a dangerous mutiny from her hardline Bavarian Interior Minister Horst Seehofer, who has vowed to defy her and order police to shut German borders to most asylum seekers by early July if there is no EU accord.

Merkel, arguing that the issue must be resolved at the EU level, has pledged to reach deals with transit and arrival countries in the narrow two-week window ending with the Brussels summit.