Jakarta: Malaysia has lashed Australia's decision to recognise West Jerusalem as the capital of Israel, describing it as a "humiliation" of the Palestinians and their quest for a homeland.

In a statement released by the Malaysian ministry of foreign affairs on Sunday, the south-east Asian government also said Australia's decision was premature. 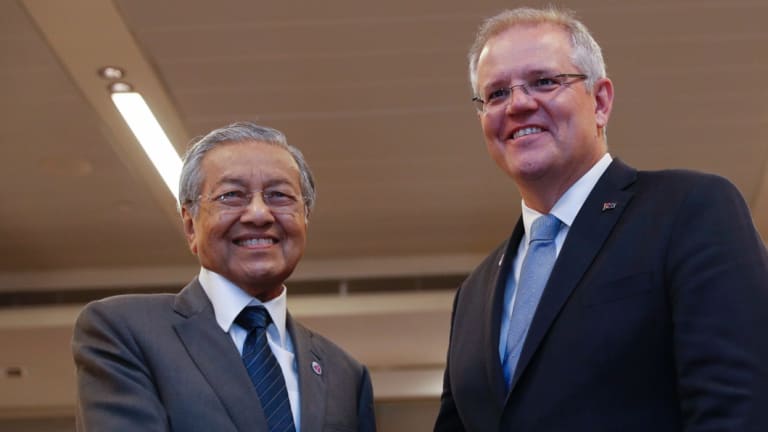 The strongly worded statement from Malaysia contrasts sharply with the muted initial response from Indonesia, and underscores the fact that Canberra's decision has put Australia's allies, trade partners and neighbours off side.

"Malaysia strongly opposes the decision by the government of Australia to recognise West Jerusalem as the capital of Israel," the Malaysian foreign ministry statement said.

"Malaysia firmly believes that this announcement, made before the settlement of a two-state solution, is premature and a humiliation to the Palestinians and their struggle for the right to self-determination.

The comments come a day after Prime Minister Scott Morrison formally recognised West Jerusalem as Israel's capital while also acknowledging Palestinian aspirations to establish a separate state with its capital in East Jerusalem.

In November, Malaysian Prime Minister Mahathir Mohamad said after meeting Mr Morrison in Singapore that "I pointed out that in dealing with terrorism, one has to know the causes".

"Adding to the cause for terrorism is not going to be helpful, I pointed that out," he said, referring to the proposal.

In a backdown from his original proposal, Mr Morrison declined to move Australia's embassy to Jerusalem immediately and instead said this would be delayed until a two-state solution was agreed – which could take years. A trade and defence office will be set up in West Jerusalem instead.

Nevertheless, the decision to recognise West Jerusalem drew strong criticism from the Arab world, where there are already calls for a boycott of Australian exports such as beef and wheat, and triggered criticism in Indonesia from opposition parties.

Late on Saturday, the Indonesian government released an official response to the announcement that noted Australia's decision to "not relocate its embassy to Jerusalem" and Australia's support for "the principle of two-state solution with East Jerusalem as the capital of the state of Palestine".

The statement did not acknowledge that West Jerusalem had been recognised as Israel's capital, nor did it mention when or if the delayed free trade deal between the two countries would be signed – which could be a sign the trade deal will be put on ice until after the April 2019 presidential and parliamentary elections in Indonesia.

Indonesian Trade Minister Enggartiasto Lukita told the Sydney Morning Herald and The Age on Sunday that he had urged his colleagues in the Foreign Ministry to book in a date for the signing of the trade deal.

But he could not say when or if the deal, which has been years in the making, would be signed.

Indonesia was due to sign a free trade deal with the European Union on Sunday.

"It's up to the two foreign ministers deciding on the time. Yesterday, the Australian Prime Minister has said [they] won't move the embassy. So I have asked the foreign minister to make the time," Lukita said,

"Every international trade deal should be in line with foreign policy … it's up to both foreign ministers to decide the timing."

On Sunday, Mr Morrison welcomed the measured response from Indonesia and said Labor leader Bill Shorten needed to make the case for reversing the federal government's recognition decision ahead of the next election.

"He will have to outline to the Australian community why he would want to now reverse that position and step Australia back from what should be, I think, a very strong stand of support for Israel," Mr Morrison said.