Kuala Lumpur: Malaysian Prime Minister Najib Razak says he will "accept the verdict of the people" after his ruling party lost its majority, but he has stopped short of conceding Mahathir Mohamad will be the country's next prime minister.

In a short statement on Thursday morning – and in a sign the resolution of the Malaysian election may have some way go to – the prime minister pointed out that no single party could claim a simple majority. 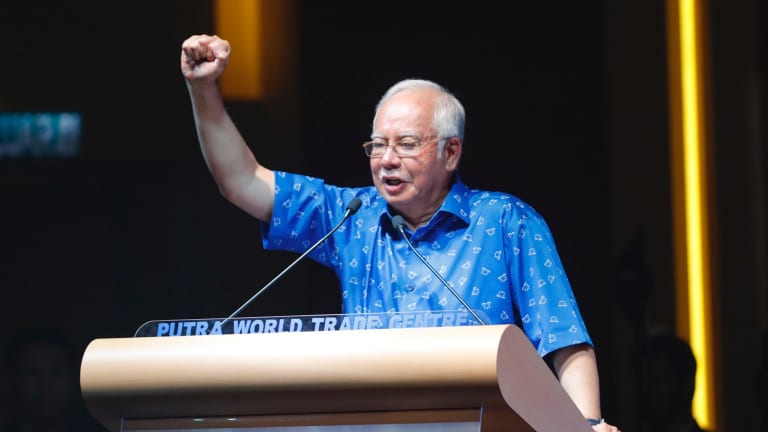 Malaysia Prime Minister Najib Razak, gestures during a speech in the election campaign.

Instead, he said, Malaysia's king would decide who the next prime minister would be.

"I and my colleagues accept the verdict of the people," he said.

He said the ruling Barisan Nasional (National Front) "will honour the principle of democracy in the parliament", adding that, "I urge all Malaysians to be calm and to trust the king's wisdom to make the best choice."

Najib said that since he took office in 2009, the government had tried to improve the living standards of the people, and that more than 2 million jobs had been created.

Najib's comments will stoke fears among Malaysians that the ruling paty, which has been in power for 61 years, may be unwilling to let go of its hold on power.

The opposition Pakatan Harapan (Alliance of Hope) coalition parties claimed 122 seats in the 222 member parliament, ten more than the 112 required to form a majority government.

But no single member of that coalition won a simple majority. Dr Wan Azizah's PKR (Justice) party won the largest number of seats, 104, within the PH coalition.

Mahathir was prime minister for 22 years from 1981 to 2003 for the Barisan Nasional coalition, which has now lost its narrow majority and his looming return to the prime ministership caps a remarkable series of events in Malaysia.

He was due to speak soon at a press conference.