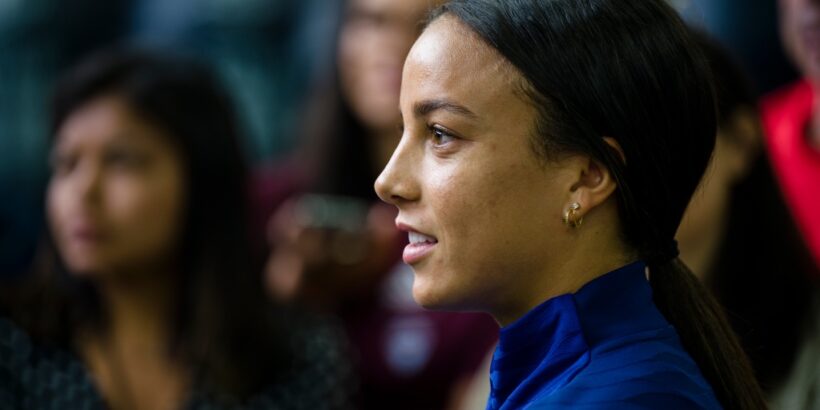 Upon her return to Colorado, United States Women’s National Team star forward Mallory Pugh is in the best form of her life.

All it took to find it was the biggest adversity yet of her soccer career: Missing her first major tournament since she was 16 years old.

Pugh has found the golden touch again with 15 goals for her club and country across 2022, and leads the USWNT with five goals in 2022. She has six at club level — the third-best mark in the NWSL. She will hope to add to the tally when the U.S. hosts Colombia, with kickoff set for 5:30 p.m. Saturday on FS1 at Dick’s Sporting Goods Park in Commerce City.

The Highlands Ranch native burst onto the USWNT scene as a 17-year-old when she captured the golden boot at the U-20 World Cup. But she had been a regular at youth national team camps since she was in seventh grade. After all the media attention that was garnered in her teenage years and a 2019 World Cup victory at 21, Pugh was left off the 2020 Olympic team. She said it was exactly the spark she needed.

“Yeah, I think that not being on the Olympic roster was obviously very hard at the time,” Pugh, now 24, said on Tuesday at the Broncos’ UC Health Training Center. “But looking back at it, I think it was the adversity that I needed in my career. It taught me a lot about, one, myself as a player, but (two), I think more so as a person. I think there was a lot of transforming kind of happening within that time. It got me to be more confident in myself again, and how I play and who I am.

“Obviously, I think I wasn’t performing. And I realized that. I think that ultimately, this environment is competitive. To be in this environment, you have to perform well. I think that’s one thing that I learned and I just think (I was) trying to find my game again, too.”

Since finding her game, Pugh’s had a renaissance with the Chicago Red Stars and is expected to be a dangerous weapon on the wing for the USWNT when the 2023 Women’s World Cup qualifiers start July 4.

Lindsey Horan considers Pugh one of her best friends. The Golden native spoke glowingly about how Pugh bounced back from last year’s omission on Friday, and was resolute in the belief that Pugh is “playing the best soccer of her career right now.”

“I think that was very hard on her and something that maybe hasn’t dealt with in her career, because she’s really taken off since she was 15-16 years old and she’s been a star with U.S. Soccer. But that being said, what had happened in the Olympics and what she did after that just shows (who) Mal is. What she’s like, her personality and her character.

“…She’s scoring goals, she’s having fun and I mean, some of the best goals I’ve ever seen as well. So, for me, as a big sister and a good friend of hers, it’s amazing to see because she did that by herself.”

USWNT head coach Vlatko Andonovski in a press conference earlier this month said that Pugh and Windsor’s Sophia Smith were “the most exciting players in the league right now.”

He also pointed out that behind the scenes, so much work was done from a tactical and technical standpoint for them to get back into the picture. Maybe most importantly it came from a mental standpoint — for both players to believe they could return after getting left off the Olympic roster, and can be the future.

“Every time I see them do something now on the field, it just brings so much happiness to me because I was the one who was the one who had those tough conversations with them. I was the one that delivering the message to them. But at the same time, as I was delivering the tough message, I had to go stand in front of them and tell them how much we believe that they are going to be the future of this team.”‘

For Pugh, Saturday is more than just a homecoming. It’s a chance to let everyone know she and her Colorado teammates are all the way back.

“There’s a lot of us here and I know that we just want to make Colorado proud,” she said.