A Scottish family is suffering a severe backlash after a son posted a deeply offensive joke about Auschwitz he claimed had been sent to him by his father.

Josh Kane posted on Twitter that his parents had been at the concentration camp and he could not believe what his father sent him.

Mr Kane then posted a picture he had received of an enormous pile of shoes at the camp with the question: ‘Do you want me to get you a pair of shoes?’ 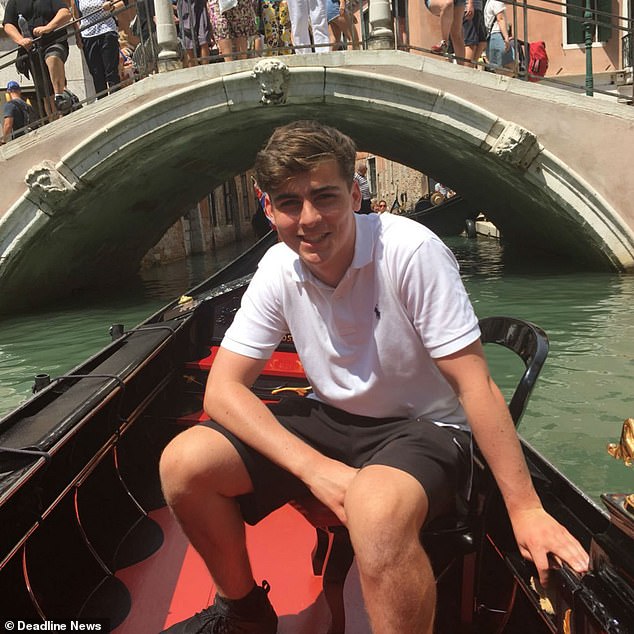 Josh Kane, from Wishaw, North Lanarkshire, pictured, has been blasted on social media after he posted a ‘disgraceful’ message from his father who was visiting the Auschwitz concentration camp 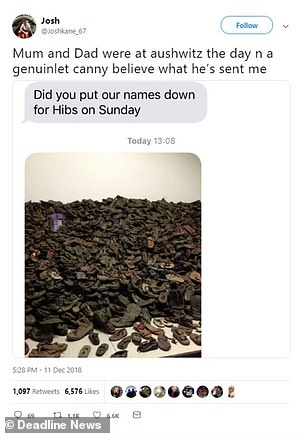 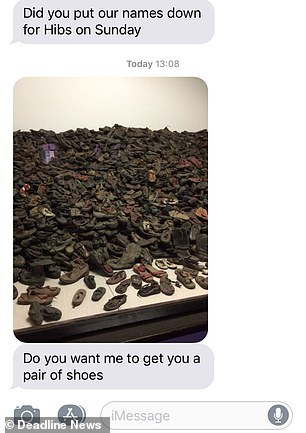 Both Mr Kane and his parents have been branded ‘disgusting’ on social media for the posts.

Mr Kane, a Celtic fan from Wishaw, North Lanarkshire, tweeted yesterday: ‘Mum and Dad were at Auschwitz today and I genuinely can not believe what he’s sent me.’

A private message said to be from Josh’s dad to him read: ‘Did you put our names down for Hibs on Sunday?’

Directly underneath that message is the photograph of a pile of shoes taken by the Nazis from their victims.

Beneath that is the question: ‘Do you want me to get you a pair of shoes?’

Several social media users condemned Mr Kane for his reason for posting the message. One wrote: ‘I don’t know what’s worse, sending the message in the first place or thinking it’s funny to post it.’

Mr Kane tried to defend himseld by writing: ‘Where did a say it was funny?’

She then replied with: ‘Oh yeah cos you’re really posting it out of respect aren’t you, if your dad wants to make a sick joke then whatever but don’t go posting it on here fishing for likes.’

Another criticised Mr Kane for placing the blame on his father: ‘Imagine outing your dad like that.’

In October this year, Polish officials were hunting three girls who caused outrage after posting a selfie on social media of them throwing Nazi salutes at Auschwitz.

An estimated 1.1 million people died at the Auschwitz-Birkenau complex of concentration and extermination camps in Poland, which covered an area of around 40 square kilometres.

What was the Auschwitz concentration camp?

Auschwitz was a concentration and extermination camp used by the Nazis during World War Two.

The camp, which is located in Poland, was made up of three main sites. Auschwitz I, the original concentration camp, Auschwitz II-Birkenau, a combined concentration/extermination camp and Auschwitz III–Monowitz, a labour camp, with a further 45 satellite sites.

Birkenau became a major part of the Nazis’ ‘Final Solution’, whereby they sought to rid Europe of Jews.

An estimated 1.3 million people were sent to the camp, of whom at least 1.1 million died – around 90 percent of which were Jews.

Since 1947, it has operated as Auschwitz-Birkenau State Museum, which in 1979 was named a World Heritage Site by Unesco.

Auschwitz was an extermination camp used by the Nazis in Poland to murder more than 1.1 million Jews

Since 1947, it has operated as Auschwitz-Birkenau State Museum, which in 1979 was named a World Heritage Site by Unesco