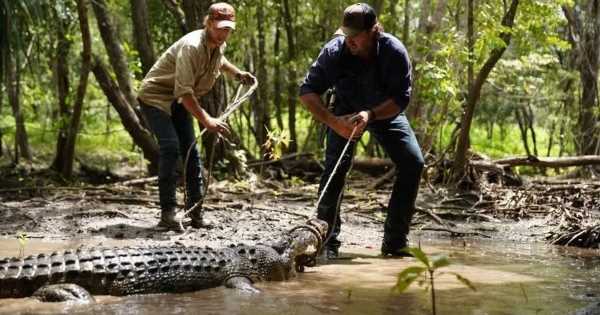 A man dubbed the "real-life crocodile dundee" has recalled the terrifying moment that a 20ft monster launched an attack on his tiny boat.

Crocodile wrangler and conservationist Matt Wright has shared the deadly encounter which saw his 12ft vessel capsized at night.

The Australian Netflix star said his team had just cornered the "massive" crocodile when it snapped at them in shallow waters.

Wright, who is featured on the streaming platform for his series Wild Croc Territory, said "there are always a few interesting moments with these crocs."

He told Newsweek: "He just grabbed the boat with his teeth and tore the whole side of it out and flipped us upside down.

"In that moment, I thought, 'F***ing hell. Everything went black in a heartbeat.

"There was a lot of noise, a lot of crunching. It was like nothing I'd ever heard before. We all just scrambled and ended up in different directions. This animal had the boat [and was] literally just throwing it around like a tin can. It was a pretty wild night. It was unbelievable."

The animal expert said he was powerless during the attack.

"You've got no control. At least he already had something in its mouth and it wasn't us," he said.

Wright says he has been around wildlife his wildlife and gained a fascination with animals when he was just a child.

"I was catching brown snakes since I was about 6 years old. It's pretty much our day-to-day life in northern Australia," he explained.

To stay up to date with all the latest news, make sure you sign up for one of our newsletters here

"It's great to be able to showcase what we do up there. A lot of people don't get to see that and haven't seen that since the days of Crocodile Dundee."

Wright said that his aim is to protect animals from human threats and to stop people from coming to harm.

He added: "Removing them and taking them out of their natural habitat isn't the most ideal situation, but unfortunately, with human populations encroaching into their land, it's a necessity.

Wright continued: "It's a dangerous job trying to catch these massive crocodiles and move them into areas where they're not going to be disturbed in the future.