A tiger which terrorised India’s forests and is believed to have killed 13 people has been shot after she was lured into the open with a Calvin Klein fragrance.

A hunter shot and killed the female tiger with a single bullet, after the animal had charged at a forest ranger who fired a tranquilising dart at her.

The big cat, given the nickname T-1, was coaxed out of hiding in forests in Maharashtra, central India, in using a men’s cologne known as Obsession For Men. 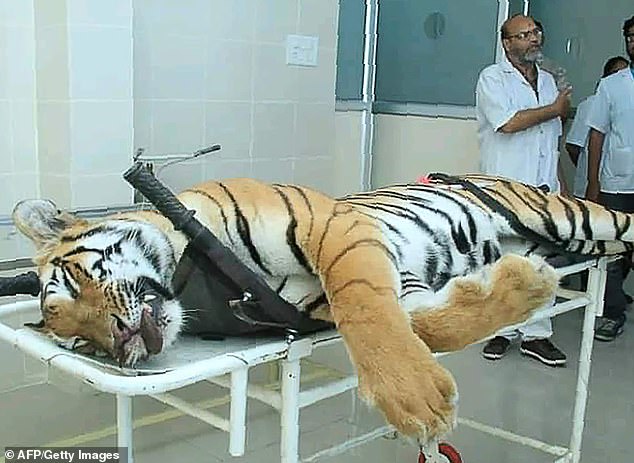 The body of man-eating tiger T-1 is pictured at a rescue centre in Nagpur after the animal was shot and killed by a hunter. She is believed to have killed 13 people 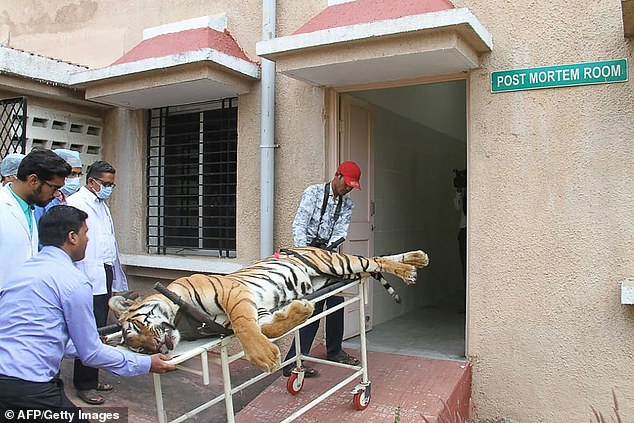 Animal rescue workers bring the body of the tiger into a post-mortem room in Nagpur, central India. It was lured out of hiding using a Calvin Klein fragrance known as Obsession For Men

Experts said the fragrance contained civetone which would make tigers seek out the source of the smell, rolling around and taking huge sniffs.

One said: ‘Whatever is in that, cats love it. They just seem to be in absolute heaven.’

The big cat was blamed for 13 deaths since June 2016 but animal activists said she was trying to protect her young.

A team of more than 150 people had spent months searching for T-1, using a paraglider and dozens of infrared cameras while sharpshooters had ridden on the backs of elephants.

India’s Supreme Court issued a hunting order for the tiger in September, ruling that she could be killed if tranquilisers failed.

But the shooting in the forests of Maharashtra state sparked immediate controversy and allegations the kill was unethical and illegal.

The Indian branch of the People for the Ethical Treatment of Animals said the tiger slaughter was about ‘satisfying a hunter’s lust for blood’. 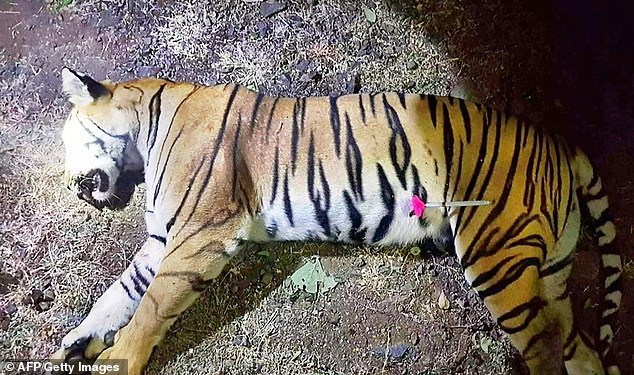 The dead body of the tiger known to hunters as T-1 after being shot in the forests of India’s Maharashtra state. She had charged at a forest ranger who fired a tranquilising dart 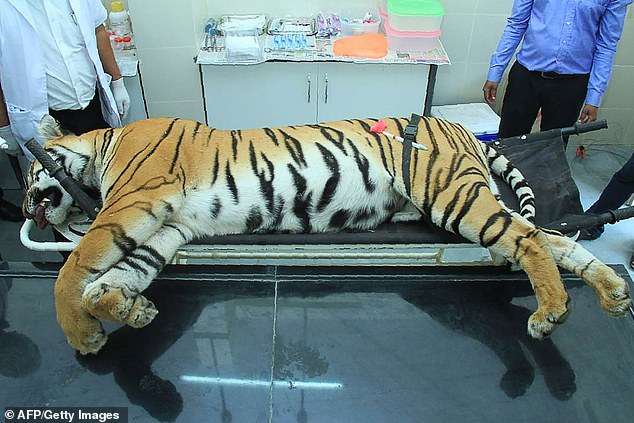 The body of T-1 in Nagpur. A team of more than 150 people had spent months searching for her, using a paraglider and dozens of infrared cameras while sharpshooters had ridden elephants

Forestry officials acknowledged to Indian media that no vet was present during the hunt, as required by the Supreme Court order.

T-1 was shot by Asghar Ali Khan, son of India’s most famous hunter Nawab Shafath Ali Khan, who was meant to be leading the hunt but was not present on Friday night.

The senior Khan defended his son’s actions as ‘a reflex action of self-defence’ as the tiger turned on the hunting party after being struck by a tranquilizer dart.

India has launched a major campaign to boost tiger numbers. At the last tiger census in 2014 the number had risen to more than 2,200 from a low of less than 1,500.

But urban spread as the population of 1.25 billion grows has increasingly eaten into the territory of wild animals.

Endangered elephants and tigers kill on average one person a day, according to government figures.