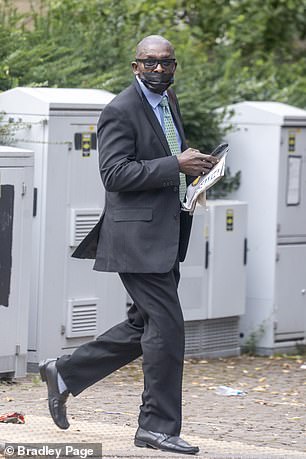 Roy Reid, 58, pictured at Croydon Crown Court, where he pleaded guilty to making indecent photographs of a child and possessing an extreme pornographic image

A senior social worker is facing jail after accidentally sending a sex abuse video of a small child to colleagues.

Roy Reid, 58, had been trying to message a WhatsApp group set up to arrange some leaving drinks.

He pleaded guilty yesterday at Croydon Crown Court to making indecent photographs of a child and possessing an extreme pornographic image.

He sent the 45-second clip of a toddler to horrified colleagues on September 20, 2019.

His co-workers reported him to managers and the police. Reid was arrested the same day.

More extreme and indecent images were found on his phone, including acts involving animals.

Judge Nicholas Ainley released Reid on unconditional bail to await sentencing on September 23, but warned him he faces jail due to the ‘serious nature’ of his offences.

The judge said: ‘You must bear in mind because of the serious nature of these matters it is very possible you will be sent to prison.

‘You are being bailed but all the options remain open regarding your sentence.’

Senior Crown Prosecutor Kate Shilton said: ‘Roy Reid was a trusted employee within children’s services and his interest in indecent images of children was both shocking and abhorrent.

‘The prosecution case included statements from members of the WhatsApp group and a forensic analysis of Reid’s phone which brought up further graphic and illegal images of concern.

‘I would like to highlight the actions of many of those in the WhatsApp group who stood by their profession and reported Reid’s crimes.

‘The CPS will always seek to bring to justice those who fuel the sexual exploitation of children.’

Wearing a dark suit with a light blue shirt and clutching a brown satchel at Croydon Crown Court yesterday, Reid spoke only to confirm his name and enter his guilty pleas.

He had previously pleaded guilty to two counts of distributing an indecent photograph of a child at Bromley Magistrates Court.