Pivot… Pivaaat! Man, 38, gets trapped for 15 minutes trying to push a wardrobe up the stairs in scene reminiscent of TV show Friends

This is the unfortunate moment a man found himself trapped while trying to push a wardrobe up the stairs at his new home.

John Jeffery, 38, a full-time carer, was stuck for 15 minutes while trying to heave a wooden wardrobe into his first-floor bedroom.

Thankfully, his wife Rachael, 39, a community carer, called for help on Facebook and a saviour came to their aid.

Mr and Mrs Jeffery and their three children Angel, 12, Skye, 7, and Autumn, 5, moved from Canterbury, Kent, to Hastings, Sussex four weeks ago and they’ve been redecorating their house since then. 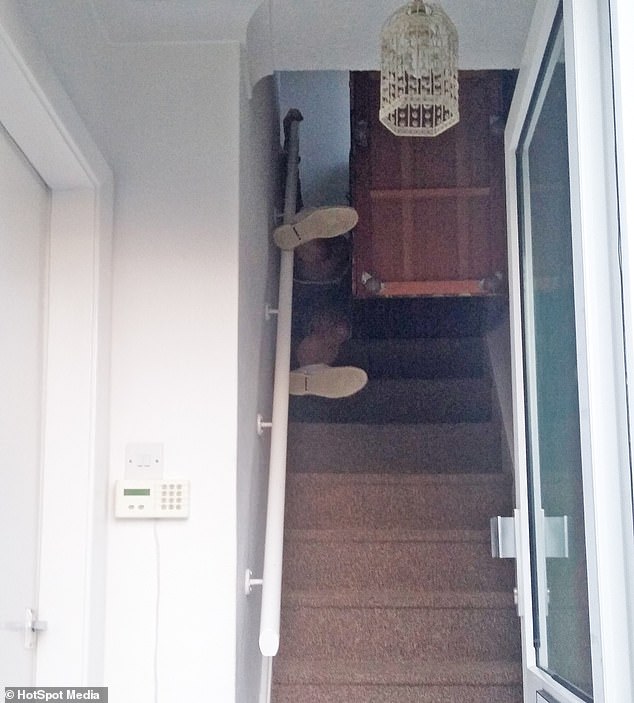 John Jeffery, 38, a full-time carer, was stuck for 15 minutes while trying to heave a wooden wardrobe into his first-floor bedroom (pictured, stuck next to the wardrobe) 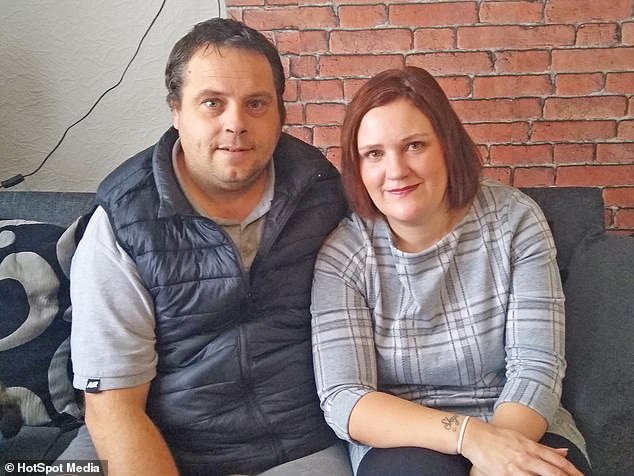 His wife Rachael, 39, a community carer, called for help on Facebook after her husband became stuck and a saviour came to their aid (the couple are pictured together)

Mrs Jeffery said: ‘Me and John didn’t have a wardrobe in our bedroom, so we created a “floordrobe”. I wanted my house to be finished in time for Christmas so I could relax.

‘We decided to buy a wardrobe and I paid £60 for it from a second-hand shop.

‘In the store, there was a label on the wardrobe which said it was for the ground floor only. I presumed that meant it was to be kept on the store’s ground floor.

‘I arranged delivery and two men dropped the wardrobe off. But they said they were unable to take it upstairs and left it outside the house.

‘As the wardrobe was on wheels, we were worried about the wind blowing it away, so John sat outside with the it while I did the school run.

‘Afterwards I helped John take it inside, but it was too heavy and bulky to go upstairs.

Mrs Jeffery knocked on a neighbour’s house and their 15-year-old son offered his help.

Him and John managed to get the wardrobe to a small square landing half way up their stairs. 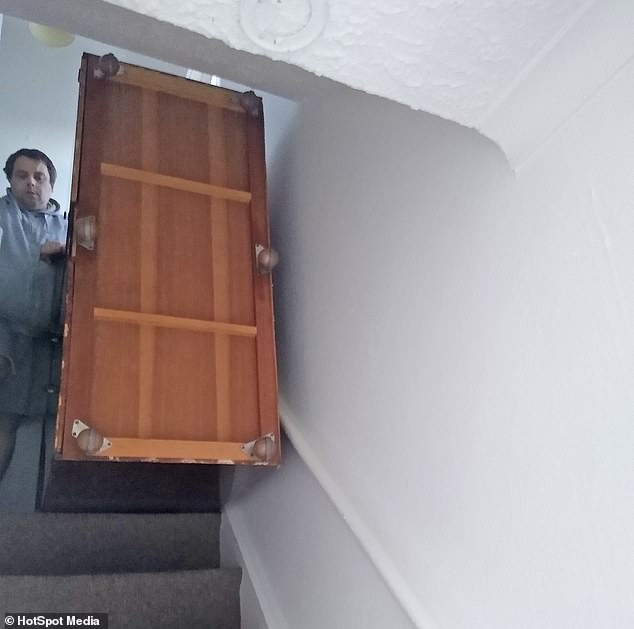 The movers who delivered the wardrobe said they would not help take the item upstairs, so Mr Jeffery was left trying to haul the hefty piece of furniture himself

But it wouldn’t budge any further as the pair weren’t strong enough to get it to the top, and ended up in a scene reminiscent of one from cult TV show Friends.

Afterwards, the teen left and John became trapped after he tried to climb down the stairs.

Mrs Jeffery said: ‘He started yelling that he was stuck between the wardrobe and the wall.

‘I was laughing so hard. His feet stuck out the side, it was like a comedy sketch so I snapped a picture.’

Mrs Jeffery posted on Facebook offering a £20 reward for someone to help move the wardrobe and free her husband. 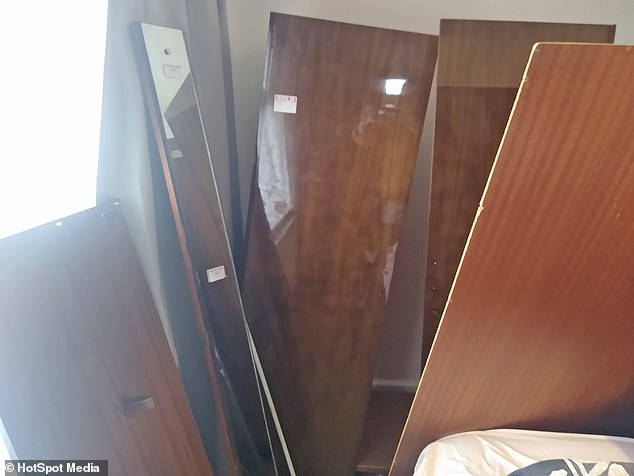 Mr Jeffrey was eventually able to get the wardrobe up to the first floor landing, but it would not fit through the bedroom door. So it had to dismantle it anyway

She said: ‘Luckily, John managed to wriggle himself free after 15 minutes.

‘Then a kind Samaritan came round and helped John heave the wardrobe onto the first floor landing. We offered him the money, but he refused to take it.

‘We then realised we couldn’t get it into the bedroom – it was too wide to fit through the door.

‘We couldn’t believe that after all that effort it wouldn’t fit.

‘So John had to take it apart which he could have done in the first place.

‘Four-and-a-half hours after the wardrobe was delivered, it was left in pieces on our bedroom floor.

‘The ironic thing is that we were going to buy a flat-pack wardrobe, but John said that building it would have been too much hassle.

‘Now he’s got to put it back together anyway but we’ve had a good laugh.’

Mr Jeffery said: ‘I tried to get downstairs past the wardrobe when I became trapped.

‘I was only stuck for 15 minutes, but that was long enough. It was a tight space and I’m not exactly a small bloke.

‘I started to panic when I realised I couldn’t budge. Thankfully, I can see the funny side now.’

In the scene of the well-loved American show, Friends, which ran for a decade, characters Chandler and Rachel are helping Ross manoeuvre a sofa upstairs while he yells: ‘Pivot!’.

Unfortunately, Ross’ chants don’t work and the trio ultimately end up cutting the sofa in half.