When street furniture just won’t listen! Man is caught on video having an argument with a bollard…before hugging and making up

A man has been caught on camera having a heated row with a fixed bollard in the street before ‘making up with it’ and walking away.

The bizarre moment was filmed by passerby Adam Mitchell who was on his way home from the gym in Skegness, Lincolnshire when he spotted the argument begin to unfold.

The 25-year-old quickly took out his phone to filmed the unknown man’s dispute with the plastic post and captured the one-sided conversation become increasingly heated on Tuesday evening.

Bizarre footage shows the peculiar quarrel result in the agitated man lifting the bollard over his head as if preparing to perform a wrestling slam on it. 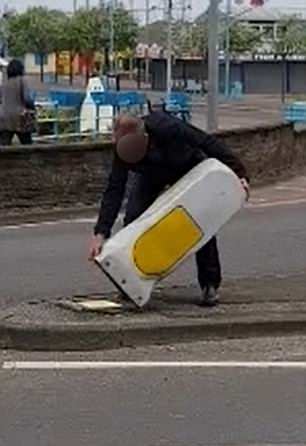 Man versus bollard: The strange scene was witnessed by Adam Mitchell who was on his way home from the gym

However the man appears to change his mind and instead tenderly places the sign back on the floor as if their argument has been soothed, petting the bollard and appearing to praise it.

Mitchell can be heard commenting that the man is ‘off his head’ and that only in Skegness would such a scene occur. 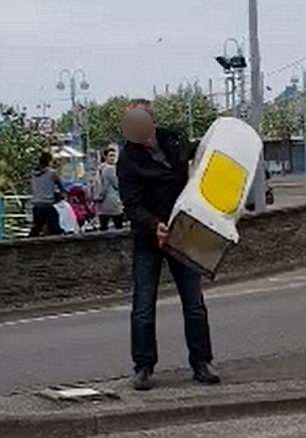 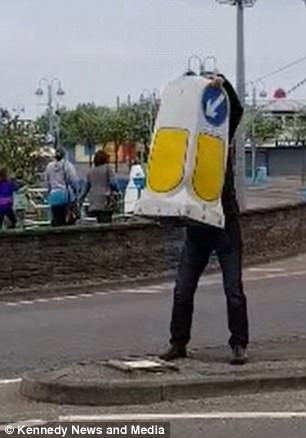 Heated: The man can be seen picking up the bollard at one stage but then putting it down and waving at it in a seemingly apologetic gesture

Plumber Adam said: ‘He was looking very confused as if he was expecting the bollard to get up and walk off with him.

‘I noticed quite a few people were gathering around him and I wondered what was going on. ‘I couldn’t hear what he was saying unfortunately.

‘I thought this bloke was in a bit of a mess. He was standing in the middle of the road and I thought it would be funny to film him.

‘He is known locally to be a bit of a wally. I’m just glad he didn’t walk out in front of a vehicle or cause an accident.

‘I will definitely keep an eye out for him in the future to make sure he’s okay.’ After sharing the video with the joke that ‘Skegness suffers again’, the footage racked up more than 39,000 views.

As the stranger tries to provoke the bollard in the video, Adam says: ‘I think he’s off his head.’

But the plumber can later be heard joking that the man has a ‘new mate’ when he eventually reconciles with the bollard.

One social media user said: ‘[He] thinks it’s some sort of dog. He’s like good boy, stay there.’ However, another simply wrote: ‘That’s what we get round [h]ere.’