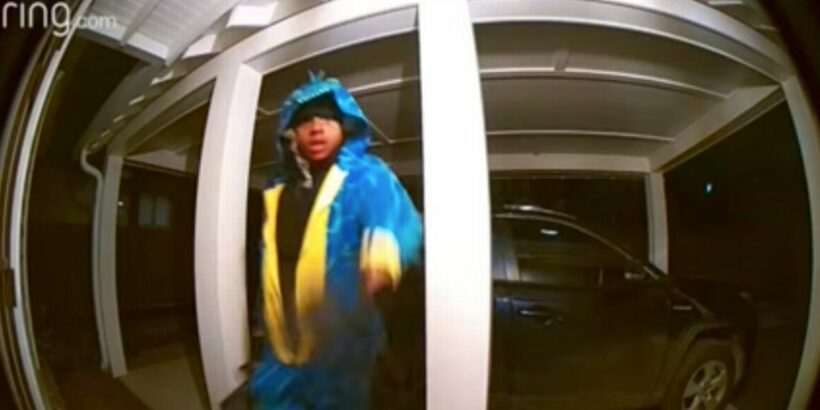 A man has been caught on camera trying to break into a home and steal a vehicle while dressed in a blue dinosaur onesie.

A doorbell camera video reveals the young man emerging from a dark-coloured SUV with a bag in his hand while he prowls around the front of the premise wearing a blue and yellow dinosaur onesie.

Police are now hunting the suspect, who appears to have a face mask hanging from one ear, which leaves his face exposed on camera.

He waves a hand in front of the doorbell, tries the door handle, then walks out of the view of the camera.

The attempted burglary happened on Richland Avenue in Nashville, USA, on January 23, according to the police, who released the footage last week.

A dog-walking woman called police Sunday morning to report that she saw open doors at a neighbour’s home while the residents were out of town.

Police say that as they were investigating the house, they learned of a vehicle break-in on Bowling Avenue.

The suspect is described as “a young black man” about six feet tall.

Meanwhile, in San Francisco, a man was spotted walking out of a pharmacy store with bags of "stolen goods" while the security guard was retrieving some of the items on the floor.

The man grabbed a few bottles of shower gel from the shop and attempted to walk away without paying until the guard stopped him in the aisle and searched for his bags.

In the UK, a man has been found guilty of possessing extreme pornographic images, after he was found with a video of a man sexually assaulting a chicken.

The 43-year-old, from Teesside, has claimed that he never watched the video, but often receives “edgy” videos from his friends.